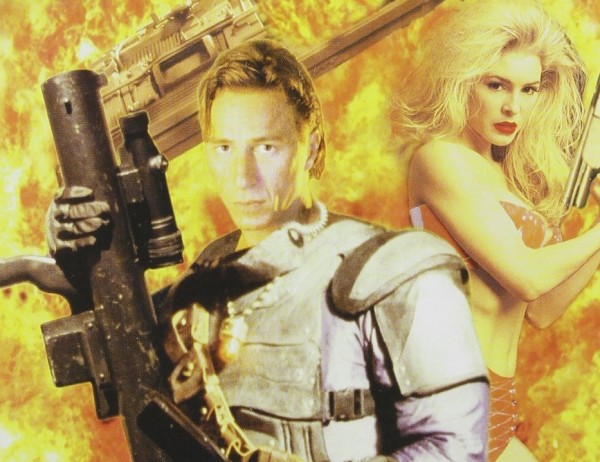 Future Fear is pretty terrible and there is little to recommend unless you’re a completist like me.

Plot: An able-bodied scientist has found a cure for the plague from outer space which has eradicated almost all life on the planet. A mad general who wants to repopulate the planet with a new race sends a special female assassin to take him out.

Sadly, I have no idea what was going on in the heads of anyone involved in this movie which makes pretty much no sense.

The story flashes back and forward constantly, making it all thoroughly confusing… and what the hell was all the Alice in Wonderland stuff all about? There’s even a scene with Jeff and his wife sitting at a tea party table with him dressed up as the Mad Hatter. WHAT?

The movie also stars Stacey Keach as an evil general who wants to take over the world with his own brand of super soldiers… or something. Keach is always good value as a villain but he doesn’t really get to do much in this except look as confused as the audience.

The acting is actually OK for the most part but one has to wonder why decent actors were in this film; the only reason I can think of was the paycheck.

It kind of has a Mystery Science Theatre thing going on and is definitely so bad, it’s good. Jeff has some decent one-liners too and is a bit John McClane-eseque in places.

Maria Ford plays Jeff’s estranged wife and has to be the most unlikeable bitch I’ve seen in a long time. I was just waiting for him to shoot her as they had no on-screen chemistry. She does at least get naked though which is another point in the movie’s favour.

You won’t care about any of the characters which removes any real sense of threat or urgency to the story. There is some hilariously bad CG too and the whole movie looks like it costs 5 bucks.

Overall, if you want classic Wincott then watch Martial Outlaw or Mission of Justice. Future Fear is pretty terrible and there is little to recommend unless you’re a completist like me.