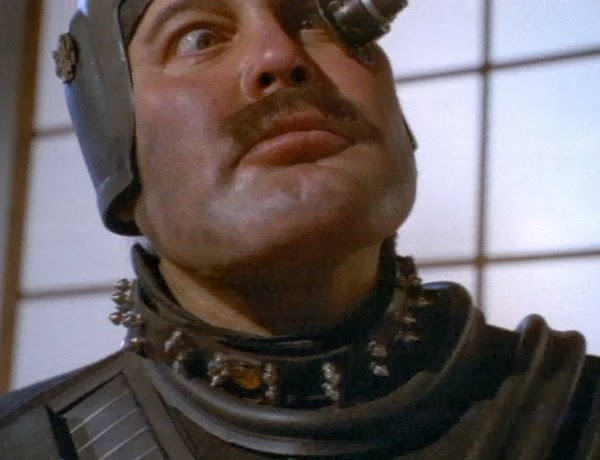 Overall, Future War is probably the worst film Bernhardt has been associated with and I really can’t recommend it unless you have copious amounts of beer beforehand.

Plot: A runaway human slave from Earth’s future escapes to the present day.

Review: There aren’t enough exploding dinosaurs in today’s cinema, so if you’re feeling the need to see such spectacle then you should check out this Daniel Bernhardt actioner. Actually… no, you really shouldn’t.

Everyone knows I’m a big fan of Daniel and I think he’s an awesome dude but seriously, what the Hell was he thinking with this movie? I like a low budget movie as much as the next guy but I hate a movie that just looks cheap in every way.

This is actually the kind of film that should be on Mystery Science Theatre 3000, it’s THAT bad. *Note: It has actually been on MST3K*

It’s so bad actually that it’s hugely entertaining. I was laughing from pretty much the opening scene until the end… and it isn’t meant to be a comedy.

The acting by the majority of the supporting cast is amateurish at best and the rather small dinosaurs look like puppets. Still, at least they aren’t CGI, but the way their mouths move is hilarious. They have to be the least threatening monsters of all time.

You’ve also got the cheapest looking cyborgs ever, although you’ll maybe notice the main one is played by Robert Z’Dar from Maniac Cop fame.

In fairness, there are a few decent fights courtesy of Daniel Bernhardt but it’s all so unbelievably lame that you won’t care.

It looks like it has a budget of 3 dollars and you see every penny on screen.

Overall, Future War is probably the worst film Bernhardt has been associated with and I really can’t recommend it unless you have copious amounts of beer beforehand.