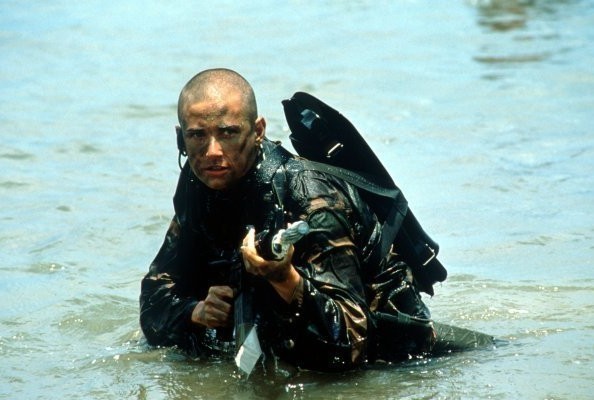 Plot: A female Senator succeeds in enrolling a woman into Combined Reconnaissance Team training where everyone expects her to fail.

Review: This is a movie very few still talk about but I watched it again recently on Blu Ray and it’s actually an excellent film. Demi Moore worked her ass of to get into shape for this movie and her dedication to the role is laudable.

Her character Jordan O’Neill is tough as nails and yet likable too. You are rooting for her, especially in her battle of wits against her sadistic drill sergeant, played to perfection by Viggo Mortensen. It’s hard to believe this is the same guy who played Aragorn in the LOTR trilogy.

Gone is the kingly demeanor and now he’s just a bastard… or is he? I loved how his character develops and how he begins as a bit of a sexist pig, by the end Demi has earned his respect and has proven that women can be excellent Navy SEALs too.

The film looks fabulous but as it’s directed by Ridley Scott it doesn’t come as much of a surprise; all of the helicopters are shot in super slo-mo and the action scenes are spectacular.

It has a great score with a militaristic theme tune which really kicks in during the initial training montage. It’s fist pumping stuff and really brings you into it.

The supporting cast are all excellent and relish making Jordan’s job hell, but they all slowly come around and respect her due to her determination and skill.

At times it does feel a little bit too preachy with its message but not enough to ruin the film in any way.