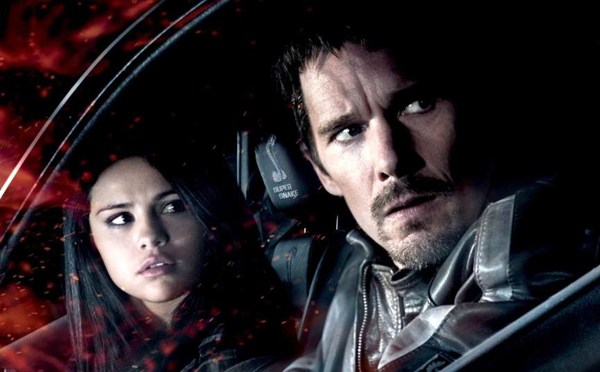 Getaway is nothing new and Selena Gomez is annoying but the action is pretty jaw-dropping and the use of practical effects and stunts is laudable.

Plot: To save his kidnapped wife, Brent Magna must drive at the orders of a mysterious man.

Plot-wise it’s nothing new but I was pleasantly surprised by the amount of practical action there was in this movie. It felt like a 70’s style car movie like Driver… just not as good.

It would have worked so much better without Selena Gomez who for most of the movie is an annoying pain in the ass. She’s not too bad in the second half but her constant wailing gets old really fast and if I were Brent (Hawke) I totally would have shot her… but that’s just me.

Anyway, the majority of the movie takes place in a car with Brent behind the wheel as he desperately tries to save his wife from this mysterious mad man who is definitely not played by Jon Voight.

There is almost more vehicular carnage in this movie than a Fast & Furious film, which is saying a lot. There are real cars being flipped over, real explosions and it makes it all the more interesting when it doesn’t feel like you are watching a video game. I have to give props to director Courtney Solomon for maintaining the action up until the very end.

Admittedly it does get a little samey after a while but it’s so slickly executed that it’s hard not to be impressed by all the smashy smashy.

Hawke is as likeable as ever and has had a really varied career playing characters in pretty much every kind of genre. There isn’t much to Brent but there doesn’t need to be; why waste time on characterization when you can watch stuff explode instead?

Overall, Getaway is nothing new and Selena Gomez is annoying but the action is pretty jaw-dropping and the use of practical effects and stunts is laudable.