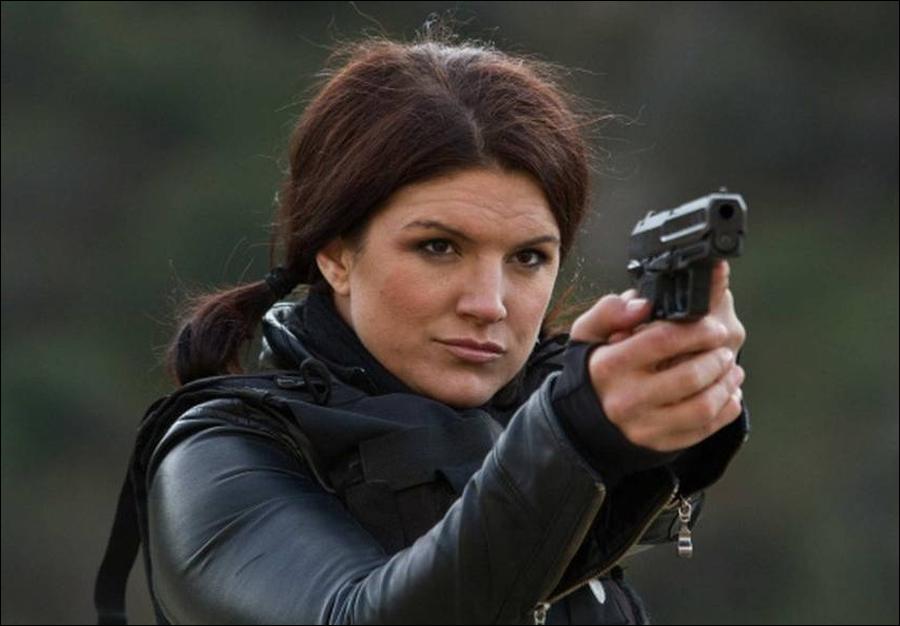 Gina Carano is rapidly making a name for herself as the best female action star in the business and with her new movie ‘In the Blood’, she is showing that character is just as important as action.

‘In the Blood’, which will be released in Canada on April 24th from Raven Banner Entertainment, is about a woman (Carano) who sets off on her own to take down the men she thinks are responsible when her husband goes missing during their Caribbean vacation.

We chat with Gina about the movie, what she looks for when she receives a script and choreographing fight scenes.

‘In the Blood’ has you searching for your husband after he disappears; as you have two sisters, how do you think you would react if a situation like this happened to them?

That’s one of the main things that appealed to me about the script actually; one of my biggest fears is if I couldn’t do anything about it or what would I do if say, my sister went missing… I would do anything to get her back. What I really liked about Ava in ‘In the Blood’ was that she does do anything to get him back. It kind of lives out that fear that I’ve always had and I was able to put that into a movie and actually succeeding in doing whatever you can to get them back. So that’s what was really good about the script to ‘In the Blood’ and what I was really drawn to.

Were there any of your own personality traits injected into Ava?

I think that Ava is someone who has a very suppressed nature and so she’s trying to start a whole new life for herself and kind of ignore this other part of her. Her husband doesn’t know that much about it so when this circumstance happens she has to rely on her natural instincts and it just kind of comes out of her like a force. She’s got a lot of people against her, like the government, her husband’s parents and she has to deal with being held down and suppressed. The frustration of not being understood and having people think she is one thing when she’s not, so there was a lot that I could use for Ava.

One of my favourite scenes during ‘In the Blood’ was actually a non-action scene; when you are frantically going from hospital to hospital trying to find your husband; you come across as genuinely distressed. What goes through your mind to achieve that in a scene? How do you make yourself cry?

That was actually one of my favourite scenes too, just to actually experience that kind of scene because I’d never done that before. So just to be able to have the opportunity to try to do that was really special. There were… plenty of things I could think of (laughs). I thought about how exhausting and frustrating it would be to not be able to find out if your husband was alive or dead. I can of course substitute my own experiences in my life and it was very easy for me to kind of get there, which was a little bit of a surprise.

Then when I got there I was able to apply those emotions to the lines and the character; it was my favourite moment that I’ve done on film so far, just because somebody actually captured it and it’s out there. That feeling was so real; that’s definitely how I am whenever I cry when I‘m feeling that frustrated and trying to keep it together. I don’t really know if I would want to talk about where I went to get that, but it was definitely a very similar scenario.

The scene with you taking Chief Ramón Garza (Luis Guzmán) into the bathroom to die managed to be disturbing without actually showing any violence.

Yeah, sometimes less is more and not explaining too much is important; that’s actually something I learned from just watching Steven Soderbergh. You don’t need to explain everything; once you start explaining everything to an audience you’re kind of calling into question your audience’s intelligence, so I always likes those moments in films as well.

Cam Gigandet plays your husband Derek; he trained in Mixed Martial Arts for the movie ‘Never Back Down’ a few years back, did you guys do any sparring?

Is it important for you to do your own stunts? The zip line scenes were vertigo inducing…

Yeah, there were about three different zip lines that we filmed on and it was actually the first time I’d ever been zip-lining, so I definitely did my own stunts when it came to that. The first time I had to attach that other actor to me and he was screaming and yelling, so I couldn’t tell if he was acting or not (laughs). That wasn’t like a normal situation, as normally you’re zip lining by yourself in your harness. So I’m looking down at him and he’s attached to me and John Stockwell yells “go 15 feet more out!” and that is a lot more feet looking down and we’re trying to keep it together in the rain too.

We were in Puerto Rico and it was raining every 15 minutes, so we had to cut several times. I hope the behind the scenes show what we went through because it was pretty intense and I don’t think you get to see actors doing what we were doing very often. Cam Gigandet actually did the bungee scene where he falls. Watching Cam and Ismael Cruz Cordova (Manny) shoot that scene, which was on the second tallest zip-line in the world actually gave me tears in my eyes. They had no fear. Ismael came back one time from the zip-line and he just started crying. It was SO scary! (laughs)

I loved how it was all done for real; no blue screen or CGI so the terror and all your faces was pretty genuine.

Oh yeah, I mean when I am zip-lining in the movie that fear is definitely for real.

Is there a stunt that you just wouldn’t be willing to do for a movie?

Well there are certain things that you aren’t allowed to do due to the insurance for movies. No matter what anyone says, if you’re in an action movie and their character is going to be doing a lot of action then they’re probably not going to be able to do certain scenes.  Think I would be pretty open, but I would be afraid to do a lot of things but I think like the crying scene, if you can catch that moment of life on film, then I think it ends up being more special.

In that case I would be a lot more open to it being captured and being able to remember. So yeah, I’d be open to do a lot but I’m not going to say it will look as cool as some people who have done it in the past (laughs). It’s definitely going to be my expression of how I see that circumstance.

The nightclub fight scene was fantastic and you choreographed the action yourself, isn’t that right?

What happened with that scene is we didn’t have a lot of time for pre-production so I would show up for whatever fight scene it was that day and see what they had. Then I would try and incorporate what my character would do. She was little bit… ghetto (laughs) and would use a bottle; actually someone I know did the whole throw the bottle in a club once in Vegas (where I grew up)… so DEFINITELY someone would throw a bottle; that was definitely a bit more violently inclined.

So I would show up on set and have my say but they choreographed it and then I would come in and tweak it. I think it’s important for me to put myself in there because I have the knowledge to see what I would actually do. I think that’s important for keeping characters authentic.

In the Blood is more of an indie action feature and quite a change from Fast & Furious 6; which do you prefer – big or small budget? Do you find there is more freedom on Indie movies?

I think are positives for both; I think right now in my life I am looking for a good story and looking to figure out how to be creative and how to express myself and become better at being in front of the camera. Hopefully I can surround myself with people that I can learn a lot from, so I think it’s all about the storytelling.

That’s kind of what I’m attracted to right now; in terms of big or small; I definitely love to have more input but I think more importantly I want to be surrounded by more people I can learn from. I got a really great first experience with Steven Soderbergh and now I want to figure out how to tell a good story in a productive way where somebody has the vision for it that I can trust. That’s what I look for now.

Following on from that, is there something that you particularly look for in a character; something that has to jump off the page and make you think “I have to play her”?

I think that if I can see myself as that character and can really kind of empathize with who that character is and what they do, then I feel like that’s just the start and I can just grow from there. There definitely has to be that one thing that I can grab on to, and then I can research and grow from there. I have to see eye to eye with the character at first, research and kind of understand where that person comes from. Then I can create a completely different character, starting eye to eye then grabbing it, so you can see something about yourself in that character is important.

Ava’s a great character; would you be interested in playing her again in a potential sequel?

I don’t know; I think that would be… interesting (laughs) to have to go off in a completely different way. This is a Honeymoon, so what happens after the Honeymoon could be kinda funny. Do they stay married? Do they not? Do I completely turn him off? (laughs) Does it cause problems with their marriage later on down the line? It could definitely turn into a romantic comedy, that’s for sure.

Was there anything you had to cut out from the movie due to budget restrictions that you regret?

No, it was a pretty small shoot so we took advantage of every single moment we had on film. John Stockwell films so much that I‘m sure the editing people were having a heart attack. Everything that I felt were the main points that we filmed ended up on screen.

Would you be interested in a role in ‘The Expendabelles’ or even ‘Expendables 4’?

I think that would just depend on the character; I’m totally open to anything as long as the character is good. I feel like I am more like searching out character now. That’s one of the things I really enjoyed about ’In the Blood’ was having the freedom to express myself, so that’s what I wanna do (laughs).

Thanks very much for taking the time to chat with us and all the best with the movie.

‘In The Blood’ is available in the US on iTunes and will be released theatrically in CINEPLEX theatres across Canada by Raven Banner Entertainment on April 24th. Check local listings.