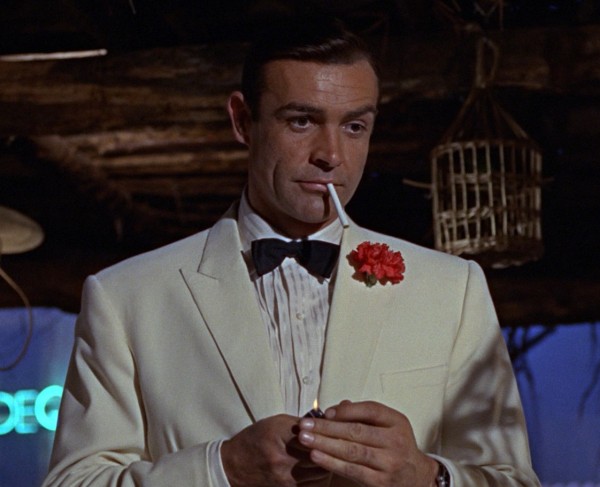 Goldfinger is still a classic Bond movie and definitely one of the best with a brilliant nemesis in Auric Goldfinger.

Review: Whenever I was younger, Goldfinger was always my very favourite James Bond film. Auric Goldfinger to this day remains the best Bond villain as he always just scared the Hell out of me and was genuinely intimidating. Interestingly enough the actor who played Goldfinger Gert Fröbe was dubbed over because his accent was too strong. It’s an excellent piece of dubbing and not even noticeable.

The movie also has the best silent henchman in the business, Oddjob (Harold Sakata), a man with a hat that is actually a deadly weapon.

Goldfinger really set the template for the Bond formula with Q and the gadgets and an over the top villain plot. Funnily enough a lot of the gadgets in this film exist now, like GPS and are standard on cell phones, etc.

Connery will always be the best Bond for me; suave, cool and ruthless mixed into one. It’s funny watching this movie now though and seeing how he practically rapes Pussy Galore (Honor Blackman) in a barn. They throw each other about for a minute but she’s pretty much fighting him off. No means no, Jimmy boy.

Pussy is probably one of the very best Bond girls because she isn’t just eye candy; she’s pretty tough and Blackman plays her to perfection.

You’ll notice I said this USED to be my favourite Bond movie, but when I watched it last week I realized, it’s actually kinda boring. The middle section of the movie definitely drags and it lacks the frantic action that From Russia With Love has, like the train fight. Bond spends most of the movie as a prisoner of Goldfinger which kills the pacing.

This is the Bond movie with THE classic scene though: “Do you expect me to talk?” “No Mr. Bond, I expect you to die!”

The finale is suitably over the top, with Goldfinger using a giant laser thing to break into Fort Knox. Bond has a great fight with Oddjob too; the best thing about the movie is Goldfinger’s fabulously over the top bad guy death: He is sucked out of the window of a plane to his doom and it’s very satisfying.

Overall, Goldfinger is still a classic Bond movie and definitely one of the best with a brilliant nemesis in Auric Goldfinger. It’s just a shame the pacing drags in places so for me, this is after From Russia With Love and Dr. No.