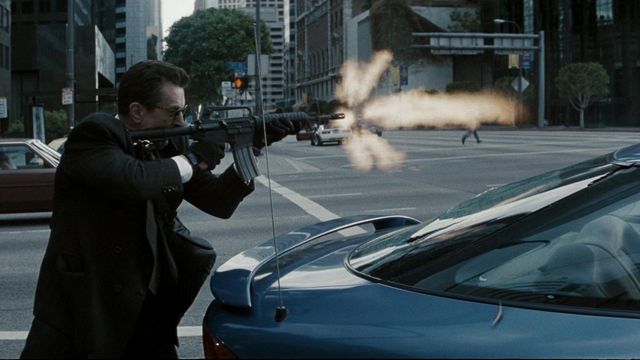 I must say thank you to Ron Whitaker who posted some deleted scenes to Heat last night in our group which got me thinking about the movie again.

There are many awesome shoot-outs in the action genre with more than a few in John Woo movies; Hard Boiled, The Killer and more but then there’s the Western genre with classics like The Wild Bunch or Open Range, all of which have amazing gunfights.

I think we can all all agree though that Michael Mann’s Heat just might be the best movie shoot-out of all time.

In Heat master criminal Neil McCauley (Robert De Niro) is trying to control the rogue actions of one of his men, while also planning one last big heist before retiring. Meanwhile, Lieutenant Hanna (Al Pacino) attempts to track down McCauley as he deals with the chaos in his own life, including the infidelity of his wife (Diane Venora) and the mental health of his stepdaughter (Natalie Portman). McCauley and Hanna discover a mutual respect, even as they try to thwart each other’s plans.

This scene takes place after McCauley and his men have committed a bank heist which rapidly goes downhill.

There is no CG trickery or fast cuts during this sequence but smooth camera work and probably some of the best gun sounds you’ll ever here. Also people actually stop to reload their weapons; I always found myself emotionally engaged in this shoot-out and still find it one of the most intense I’ever ever seen.

Am I Wrong? What are some of you favourite shoot-outs?