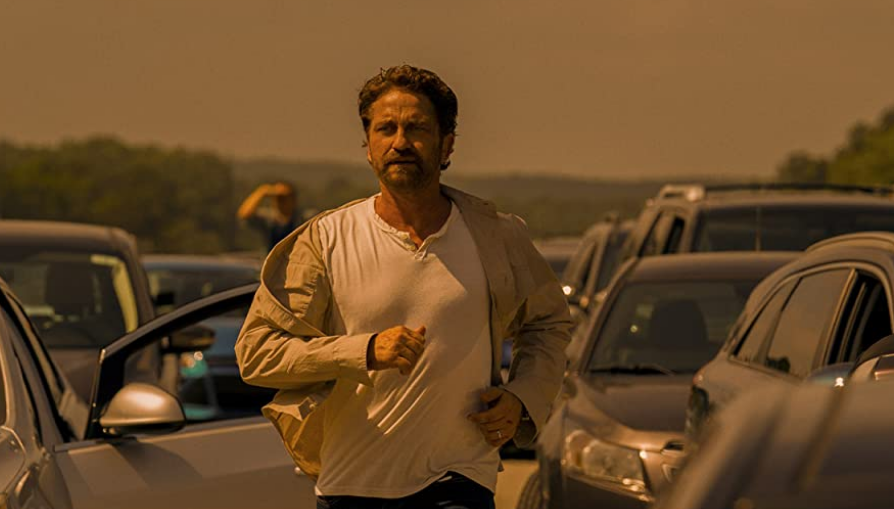 Greenland is a different movie from what I was expecting but it’s all the better for it; rather than a corny Geostorm type action movie we get an intense character driven narrative with a few scenes of devastation thrown in to keep things moving. It really should make us sit back and think “maybe we can be better than this…”

Plot: John Garrity, his estranged wife and their young son embark on a perilous journey to find sanctuary as a planet-killing comet hurtles toward Earth. Amid terrifying accounts of cities getting levelled, the Garrity’s experience the best and worst in humanity. As the countdown to the global apocalypse approaches zero, their incredible trek culminates in a desperate and last-minute flight to a possible safe haven.

Review: Greenland wasn’t quite the movie I was expecting from the trailers; I was thinking it would be some escapist nonsense for a few hours sort of like Geostorm. What we actually got was an intense character drama with some disaster movie moments that will stay with you after viewing.

It probably wasn’t the best idea to watch this movie at the moment as it only adds to current anxieties. It would surprisingly be a good double bill with Unhinged as it generally paints mankind as a mostly selfish lot not worth saving which as we’ve seen demonstrated countless times this year is entirely true. We do get a few glimmers of hope and decency, but I think if something like this happened in real life this is what we could expect in terms of human behaviour.

As you’ve read in the synopsis above Gerard Butler plays architect John Garrity and with his estranged wife and son, they try to reach the safe haven of Greenland but one awful thing after another happens and it becomes an exhausting ride.

It is filled with a few tedious clichés with the worst being the kid has diabetes so they need to find medicine for him which we’ve seen before but despite some of it being familiar I really felt for Garrity and his family.

Morena Baccarin gives a raw performance as Allison Garrity who arguably goes through a worse time than her husband with things like desperate people trying to take her son so they can get onto a plane and escape the potential extinction level event. She is very believable in the role and you’d believe she would do anything to protect her family.

Butler himself uses his real accent for once which is nice and gives one of his better performances as the troubled Garrity who is trying to make up for past misdeeds. There’s nothing like the end of the world to bring a family back together…

As I said this is more character focused so the destruction scenes are few and far between so don’t expect Armageddon. It still never lets up however, with the family trying to negotiate their way through the madness and when the comet fragments do hit it seems like Hell on Earth. The visual effects are impressive and the music score is sombre featuring some nice choral moments, especially during the finale.

There is a fight scene between John and a truck full of people which is a sheer battle for survival with everyone getting more and more desperate.

It isn’t a movie I would watch again any time soon as there is enough stress going on in the world right now but this is a far better movie than I was expecting and as disaster movies go it’s one of the betters ones of recent times.

Overall, Greenland is at times an overwhelmingly intense ride and feels pertinent to the times we are living in now. It lacks the corniness of movies like Armageddon and goes for a more serious approach which works in giving us a character drama with well executed scenes of destruction that you’ll possibly think about for days after.