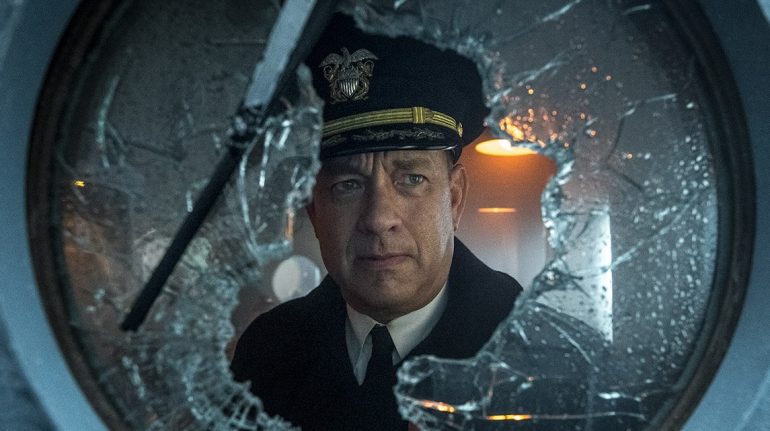 Greyhound is the first (and maybe only) blockbuster of the Summer with Tom Hanks as engaging as ever; it’s filled with spectacle and intensity moving at a relentless pace. The music score is one of the year’s best but the film lacks the heart of classic war stories like Hacksaw Ridge or Saving Private Ryan.

Plot: U.S. Navy Cmdr. Ernest Krause is assigned to lead an Allied convoy across the Atlantic during World War II. His convoy, however, is pursued by German U-boats. Although this is Krause’s first wartime mission, he finds himself embroiled in what would come to be known as the longest, largest and most complex naval battle in history: The Battle of the Atlantic.

Review: Greyhound is as close to a Summer Blockbuster as we’re likely to see this year and it’s understandable why Tom Hanks was apparently very disappointed that it didn’t get a theatrical release going straight to Apple TV. Hanks not only stars in the movie as U.S. Navy Cmdr. Ernest Krause but he also penned the screenplay so it feels very much like a passion project for him.

At just 90 minutes Greyhound wastes no time getting going as we get a brief piece of characterization with him and his lady Evelyn (Elizabeth Shue) a few months before the events of the film. He wants to get married as soon as possible but she seems reticent due to the state of the world. So he goes off on his first command and we never really hear from her again.

After that the movie is pretty much constant action as Krause battles multiple German U-Boats alongside several allies and we get some mostly impressive battle sequences. I say mostly because there is a lot of noticeable CGI in Greyhound which took me out of a few scenes but there is no denying this is pure spectacle. It feels like a mixture of U-571 and Dunkirk so it’s never short of relentless intensity.

The highlight of the entire movie is Blake Neely’s tremendous music score which sounds like a demented whale song while also using loud percussion and orchestra which truly elevates the battle scenes.

Hanks never disappoints in terms of performances and he makes Krause believable; there is a running joke throughout that he never eats or rests as he feels he can’t abandon his command even to sleep during this period.

None of the other cast get any real characterization so we don’t get to care what happens to them; if anything, the film is a little too fast paced and we could have done with a few quieter moments to give it some extra heart. It never reaches the heights of Saving Private Ryan or Hacksaw Ridge lacking that emotional core that makes those films so rewatchable.

Greyhound definitely would have been great to see on a big screen with full-on DOLBY surround sound, but my Bose system did it justice making for an entertaining watch.

It does get a little exhausting after a while maybe even making you feel a little motion sickness as you feel like you are on those rough seas with them, but it does make it a more immersive experience.

Overall, Greyhound is thrilling stuff with Tom Hanks as watchable as ever and some spectacular battle scenes that never lack intensity even if at times they do look a little too much like visual effects. Blake Neely’s score is stunning and one of the many highlights. Greyhound is on Apple TV now so if you’re looking for some big budget wartime action then check it out.