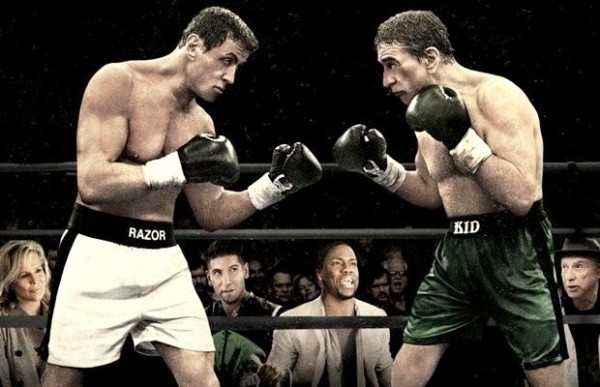 Grudge Match isn’t the trainwreck people have claimed and I found it hugely entertaining, funny and moving too.

Plot: A pair of ageing boxing rivals are coaxed out of retirement to fight one final bout — 30 years after their last match.

Review: Well, better late than never, right? I know I should have seen this a couple of weeks ago but Christmas got in the way. So I finally get to see Rocky vs. Raging Bull, was it any good? Actually yes!

Having heard nothing but negative buzz for it I went in with little expectations and although not an amazing movie it’s certainly entertaining and rather hilarious too. The surprising star turn was from Alan Arkin who has all the best lines and steals pretty much every scene he’s in. The little dance he does when Sly is on the phone to Kim Basinger was one of my favourite scenes.

Admittedly, I will agree with some critics who said that Stallone seems rather bored or maybe it’s just the script; he didn’t have much in the way of dialogue but you still love him anyway. He’s Sly after all, the underdog and you always root for him. His character is a man full of regret over leaving boxing and the woman he loved 30 years ago so it’s just the way he was written.

De Niro’s character “Kid” is a total ass but I still kinda liked him as his character slowly changes and becomes a better person; when he’s outside Henry ‘Razor’ Sharp’s (Stallone) house essentially begging him to fight as he’s never felt more alive, you realise just how desperate he is for it and then you start rooting for him too.

The good thing is there isn’t too much self-reverential humour in the movie; I was expecting lots of Rocky/Raging Bull homages but there weren’t really. The only moment was when Razor is about to start punching hanging meat in a freezer (like the first Rocky) and Arkin says “Hey stop it! You don’t have to punch everything, ya know!”

I do think it was a bit of a missed opportunity though with the final fight; I did have a little want that Eye of the Tiger or Gonna Fly Now would have played as Stallone made his way to the ring but it didn’t happen. Probably for the best though as it would have made everyone groan. In the opening moments we do get to see photos of the “younger” Razor/The Kid and it’s shots from Rocky and Raging Bull, which I actually thought was a nice touch.

The funniest moment which had me literally falling out of my chair laughing was Sly and De Niro trying to sing the National Anthem at the Monster truck race. Sly can barely get a note out and De Niro keeps forgetting the words. The way it was handled was brilliant and genuinely humorous.

It’s nice to see Kim Basinger still looking fabulous and she brings a nice piece of heart to the story but it had plenty anyway. Both of the leads do well and the supporting cast are mostly excellent except a couple of things… first of all: the kid. Yes, there is the obligatory “funny” child in the movie and although he’s not Jar Jar annoying, he’s still a child and they are always annoying in every movie. Ever.

Kevin Hart was also rather annoying and loud and a lot of the time I couldn’t make out what he was saying. He had a few funny lines but once again I think it was the script which let him down.

The final fight itself is satisfying and although you will be rooting for Sly, you kinda wouldn’t mind of De Niro won either. They both prove to be honourable men and it’s all wrapped up in a satisfactory manner.

Overall, Grudge Match isn’t the trainwreck people have claimed and I found it hugely entertaining, funny and moving too. You should go see it just to see Sly in the ring again and you’ll hear “Rocky! Rocky! Rocky!” in your head.