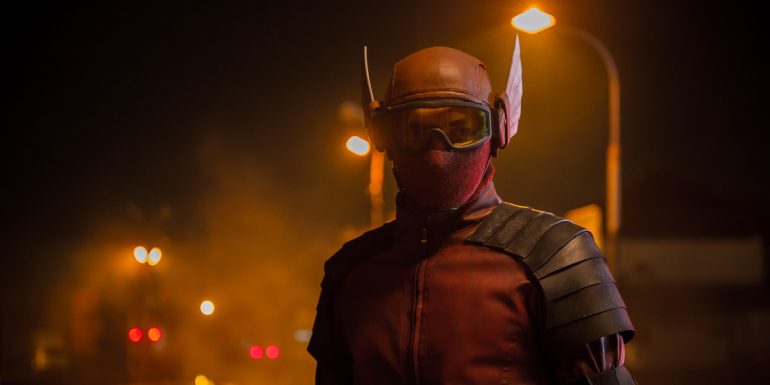 It’s difficult to come up with anything new these days when it comes to comic book adaptations and Gundala may have too much packed into the runtime but it has some solid fight scenes and Abimana Aryasatya is immediately appealing as our hero Sancaka/Gundala so you could do a lot worse than giving it a try.

Plot: Based on the classic comic, Gundala is a poignant portrayal of the notion that heroes—whether everyday or superhuman—can be found anywhere (though a superpower never hurts). Indonesian orphan Sancaka spent his life on the streets trying to attract as little attention as possible, but when greed and violence reach a fever pitch in Jakarta, it soon becomes clear that he is the people’s only hope for peace.

Review: I just subscribed to Hi-Yah! and I’m catching up on some recent films I’ve missed and one I hadn’t seen was the Indonesian superhero actioner Gundala based on the comic book character. I’ve never read the source material so I’m judging this purely as a movie in its own right.

Our protagonist Sancaka (Abimana Aryasatya) goes through a rough childhood after his father is killed and his mother disappears. Sancaka learns to take care of himself on the streets and despite being told to only look after himself he can’t help himself if he sees injustice happening. He is a true hero who is easy to root for and wants what is best for his people so he is destined for greater things.

After we see Sancaka’s childhood we cut to him working as a security guard just trying to mind his own business but the country is tearing itself apart with crime and it needs a saviour. Sancaka is struck by lightning and he (slowly) develops powers and uses his new skills to save people from thugs.

The main villain of the tale is Pengkor (Bront Palarae), a local crimelord who was disfigured after a fire in an orphanage; over the years he would rescue orphans from around the country and recruit them, building up his army.

Directed by Joko Anwar who is known for several horror pictures he brings a dark grittiness to Gundala with some impressive fight scenes; at times they look a little overly choreographed but it is a superhero movie so there’s nothing wrong with a bit of a flourish. It takes itself seriously with little in the way of humour but that helps to keep the violence threatening and showing how the indifference of people who can make change is the biggest crime of all.

At 2 hours long Gundala does have the odd pacing issue and the story could be tighter; I found a few too many characters are introduced and like every other superhero movie these days by the end it is too busy setting up future sequels to give us a truly satisfying finale.

Still, it’s refreshing to see a non-Hollywood superhero picture and the fact it doesn’t have a huge budget means the majority of the action is hand to hand fight scenes which are my favourite; frankly I would love a Batman movie with action like this where it’s just down and dirty.

The score doesn’t have anything truly memorable but it swells heroically regularly when Gundala does something cool and it provides a bit more scale to the action too.

Overall, Gundala may have too much stuffed into the runtime but Sancaka is an appealing protagonist and the action is more violent and gritty than you’d expect from many Hollywood counterparts.