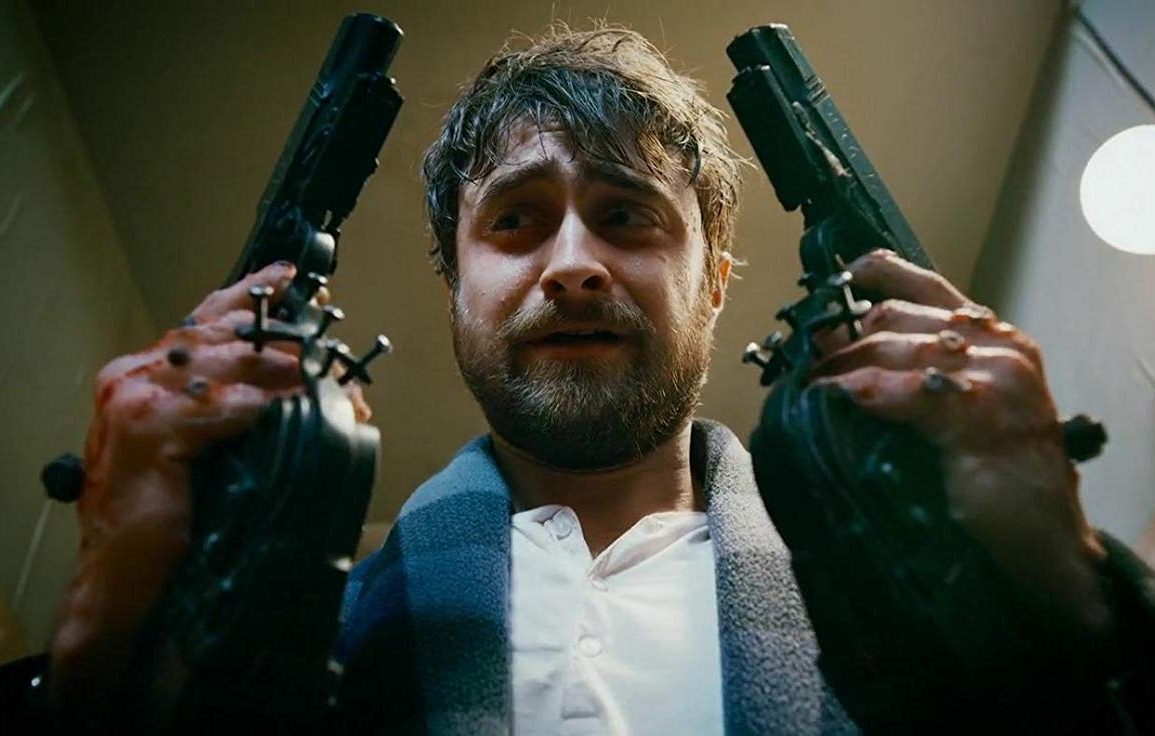 Guns Akimbo is a twisted and hilarious trip into hell and it’s an action lover’s dream with references to many classics of the genre making it surprisingly one of the best action movies of the year so far.

Plot: Miles is stuck in a dead-end job, still in love with his ex-girlfriend Nova. Unbeknownst to him, a gang called Skizm is running a deadly competition within his city in which complete strangers fight to the death for the entertainment of an online audience of millions. Miles soon finds himself caught up in the game and forced to fight in a battle to the death. Initially, Miles’ lifetime of running from his problems pays off as he manages to elude his first opponent but when Nova is kidnapped, he must finally stop running and overcome his fears to fight for the girl he loves.

Review: Writer/director Jason Lei Howden (Deathgasm) is clearly a fan of classic action movies and I feel like if I were to ever write a movie it would be like this.

Soaked in a neon Hellscape Guns Akimbo is Crank meets Gamer with Daniel Radcliffe perfectly cast as a videogame programmer called Miles who is forced to fight for his life when he wakes up with guns nailed to his hands. It’s such a crazy concept that I can understand why some viewers may be put off but this is my kind of movie and it grabbed me straight away.

As soon as I saw Miles’ apartment with posters from Commando and First Blood: Part II I liked where this was going; then the camera moves to the TV and he is watching Hard Target! I laughed and cheered during the finale when Never Surrender from Kickboxer came on as Miles takes on the villainous Riktor (which I think was also a nod to Total Recall).

Riktor is played by Ned Dennehy who is clearly loving every second of the madness and he has some hilarious lines.

The script is sharp with several pop culture references and a little jab at modern society but Guns Akimbo never loses its sense of style or fun.

Samara Weaving was wonderfully unhinged and completely badass as Nix even if we can work out pretty early on how things are going to go with her and Miles.

Radcliffe does a spot-on American accent too and he is miles (ho ho) away from Harry Potter. He is never afraid to take risks and do movies which are really out there, so he deserves respect for that.

At just over 90 minutes Guns Akimbo is well paced, twisted, violent and laugh out loud funny making it a surprise favourite of the year so far.

Overall, Guns Akimbo won’t be for everyone and if you don’t like it then I can totally get it but I feel like it was made just for me so I could spot all the references to classic action cinema. Daniel Radcliffe shines in a role unlike anything we’ve seen him do before and Ned Dennehy is wonderfully over the top as Riktor. There is no shortage of violence or style making this a must see for action fans.