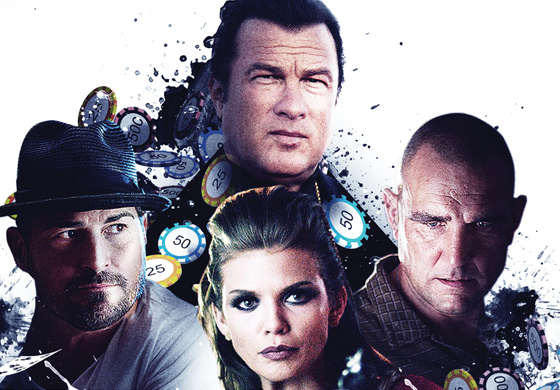 If you want to see Seagal do something a little different, then Gutshot Straight might be worth a watch otherwise I’d give it a pass.

Plot: A professional poker player falls deep into underworld when he takes an unexpected wager from a mysterious high roller.

Review: If you’re looking for a “Steven Seagal Film” then you’re going to be sorely disappointed with Gutshot Straight; it’s not a terrible film but there are better films with a similar subject matter. Seagal only has about 4 minutes of screen time and it’s nothing more than a cameo really.

The acting and cast are all first rate though and George Eads’ character Jack is interesting but the sheer lack of any tension really lets the movie down.

It’s difficult to sympathize with him as he’s basically a loser addicted to gambling at cards, which sends him down a dark path. When he meets a man called Duffy (Stephen Lang), his life rapidly goes farther downhill and events spiral out of his control.

Because Jack just seems to shrug everything off, you really don’t care what happens to him because it’s like he doesn’t either.

In the movie’s favour; I loved the opening credits which are very much a homage to James Bond and the music is sexy and helps to create a sleazy vibe.

Speaking of sexy, AnnaLynne McCord is gorgeous in this movie and is the object of Jack’s desire; her character is quite predictable but she lights up the screen.

Seagal plays a gangster who likes Jack and helps him out in his hour of need; sadly he doesn’t pimp slap anyone which was a shame.

Overall, It’s difficult to rate the movie as it isn’t an action movie but more of a drama/thriller. It’s not something you’d really want to watch again but if you want to see Seagal do something a little different, then it might be worth a watch.