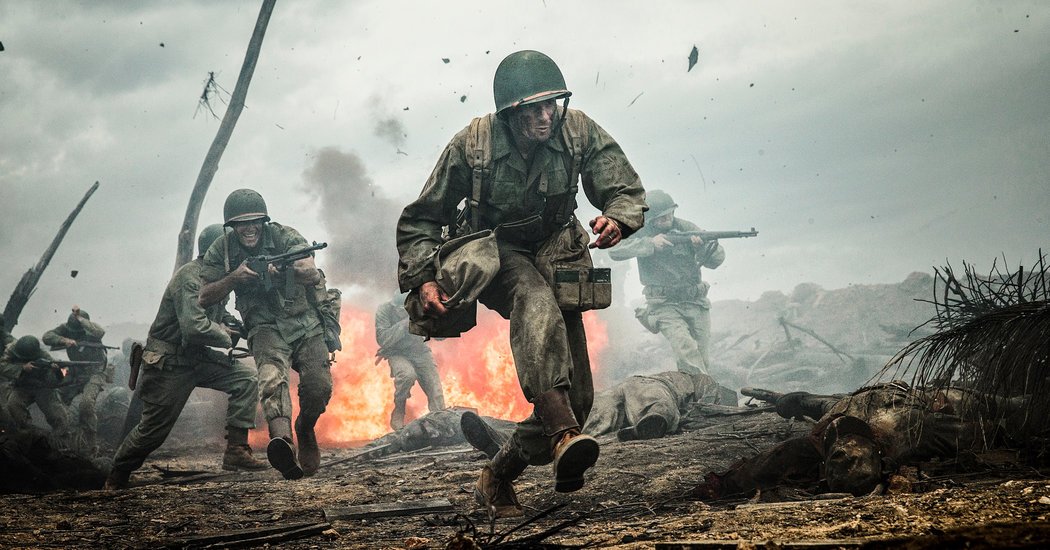 Hacksaw Ridge is one of the best war movies of recent times and I personally prefer it to Saving Private Ryan. This is moving, visceral and exciting. A must-see!

Plot: The true story of Pfc. Desmond T. Doss (Andrew Garfield), who won the Congressional Medal of Honor despite refusing to bear arms during WWII on religious grounds. Doss was drafted and ostracized by fellow soldiers for his pacifist stance but went on to earn respect and adoration for his bravery, selflessness and compassion after he risked his life — without firing a shot — to save 75 men in the Battle of Okinawa.

Review: I wasn’t sure whether to review this on The Movie Elite or this site as I’m not sure it qualifies as action, but in the end it’s from Mel Gibson who is a Legend of Action so here we are…

Hacksaw Ridge has been hailed as “Mel Gibson’s comeback film” despite the fact he never actually left but critics are indeed right and this is one of the finest movies of the year. The first half of 2016 and even the summer was quite poor for movies but the second half of this year has unearthed some real gems.

Andrew Garfield excels as Desmond Doss who is one of the most amiable and sympathetic characters I’ve seen in recent cinema; he brings genuine tenderness and heart to a role which could easily have come across as sanctimonious. The fact that he is based on a real person (who we see interviewed during the end credits) who saved 73 human lives without firing a shot is incredibly inspiring.

The one character who stole the show which I never thought I would say was Vince Vaughn’s Sgt Howell who brought some much needed humour as he shouts and belittles his new recruits R. Lee Ermy style. I also thought Hugo Weaving gave a career best performance as Desmond’s alcoholic father Tom Doss; a man haunted by war who is completely broken. Despite being abusive to his family you still feel empathy for him which is testament to what a fantastic actor he is.

I’m not normally a fan of war movies as I like my action more escapist but it’s hard to not find the battle scenes rousing and harrowing in equal measure. This movie doesn’t glorify violence but aims to disturb and Gibson shoots the battle scenes with ruthless efficiency. Where the first half introduces us to our hero Doss and his idealistic views the second half is as brutal as it gets with dead bodies strewn on the battlefield and it never lets up.

Doss watches many of his friends meet horrific ends and despite everything he never loses his faith in God. The movie is never preachy though and is only ever inspiring; where most war films are depressing, by the end of Hacksaw Ridge you’ll feel uplifted that such a heroic man actually existed and this movie gives him the respect he deserves.

Gibson as always excels at directing and personally I would give him the Oscar (not that that would happen) for Best Director as he has created a movie that manages to show the horrors of war but creates characters we care about and most importantly tells the tale of a life everyone should know about.

Overall, Hacksaw Ridge is one of the best movies of the year; wonderfully acted with spectacular battle scenes but never losing its heart. You really need to see this film.