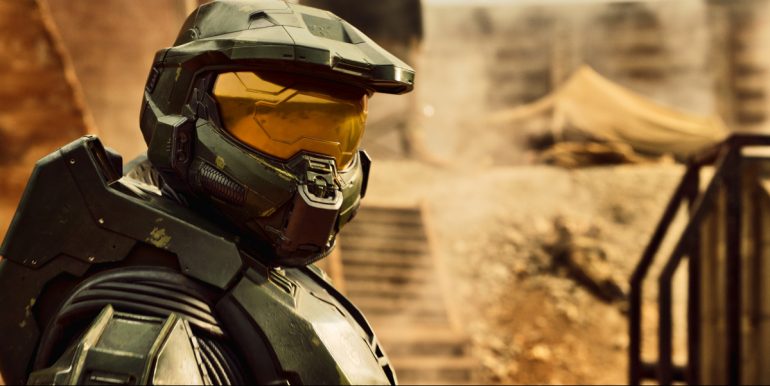 HALO isn’t as action-packed as it could be but when we do get it there are some impressive set-pieces and Pablo Schreiber is a cool protagonist making this worth a watch if you’re looking for some diverting sci-fi. It is a little dull at times and it takes liberties with the videogame stories but it’s still entertaining.

Review: I remember playing the HALO videogames a good few years ago but I can’t remember much of the story, so I am basing this review for the most part on the show itself. One thing I do remember is that Master Chief was an enigmatic character who was seen as a faceless soldier but in this show he barely wears his helmet and takes away any of the mystique surrounding him.

The series starts off well with the planet Madrigal under attack by the alien race known as the Covenant and most of the colonists are killed however, Kwan Ha (Yerin Ha) is saved when the Spartans (a group of super soldiers led by Master Chief) arrive and take out the aliens. Kwan is taken by the Spartans but when Mater Chief is asked to bring in Kwan he has a change of heart and goes on the run with her.

I thought it was going to copy The Mandalorian in terms of a protector looking after a child but it didn’t go the way I expected and instead Kwan ends up going with John’s friend Soren (Bokeem Woodbine). He vows to protect her but she will not sit idly by while her homeworld is under assault so she vows revenge and wants to go back to Madrigal and free its people.

To be honest I hate the episodes which focused on Kwan as I found her generally annoying and not especially likeable; the whole point of the HALO video games was it being a First Person Shooter where you blow away the bad guys; there are some moments like that in this series, but it does get far too talky at times really dragging things out.

Pablo Schreiber is awesome as Master Chief with his cool gravelly voice and he’s believable as a battle-hardened soldier who begins to rediscover his humanity.

Natascha McElhone brings the right amount of arrogance as Dr. Catherine Halsey and she becomes truly hateful as we find out what she has done to the Spartans.

There are too many supporting characters to go into here but I loved Soren and Bokeem Woodbine is always a welcome addition to any cast; I also thought Kate Kennedy was entertaining as Kai.

The visual effects are mostly impressive considering this is a TV series and what action we get is well done; we get shoot-outs and explosions and the highlight is episode 5 when all Hell breaks loose.

The music from the game is incorporated and some have complained that the main theme isn’t used enough but I think the score is still awesome.

Overall, HALO may take some liberties with the videogame stories (I think) but as a sci-fi show with a cool protagonist and some decent set-pieces it’s an entertaining if sometimes dull watch. If we get a season 2 then I’ll still tune in as there’s enough here to make it worthwhile.