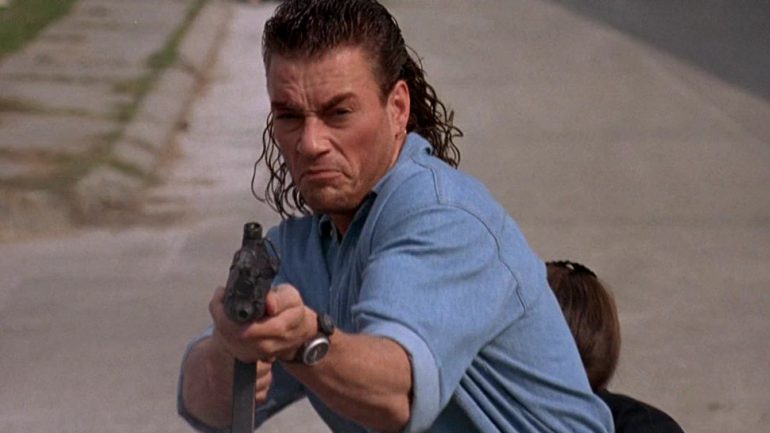 Hard Target is one of my favourite action movies and up there with Bloodsport, Lionheart, Universal Soldier and Sudden Death as JCVD’s best films. Highly recommended.

Plot: A woman hires a drifter as her guide through New Orleans in search of her father, who has gone missing. They discover a deadly game of cat and mouse behind his disappearance in the process

Review: Hard Target is arguably my personal favourite JCVD film; this review is for the Uncut UK version as apparently the US version isn’t quite as violent.

John Woo directs this classic actioner which is really just an extended Levi’s commercial; everything is overly-stylized and New Orleans clearly has an infestation of pigeons and doves.

Henriksen is on career best form as Mr. Fuchon; the big bad who considers humans the ultimate “sport”. When I spoke with Lance last year he discussed a scene that was cut which had Fuchon having a dream about hunting in Africa, showing that hunting is obsessively in his blood.

The slo-mo admittedly is over the top, but it’s just so damn stylish that I can’t hold it against it. My dad used to take me to see JCVD and Steven Seagal films in the cinema and we both loved seeing this one on the big screen.

JCVD rocks the action hero mullet to perfection and also wears the mandatory white string vest for an extra taste of badassery.

The stunts (as with all John Woo movies) are utterly crazy and there are some genuinely thrilling fight scenes. The final shoot out in the Mardi Gras graveyard is one of the all-time greats and still looks amazing (and gloriously violent). Why shoot someone once when you can shoot them 50 times?

One of the most satisfying scenes is Chance (JCVD) rescuing Nat Binder (Yancy Butler) from a group of muggers; he takes each of them down with ease and barely breaks a sweat.

Nat is incredibly likeable and a gentle person who is simply looking for her father but when she is faced with these hunters, her survival instinct really kicks in and you root for her 100%.

Graeme Revell’s score has a nice Cajun feel to it, which is obviously fitting as the film is set in New Orleans and it has become one of my favourites of his.

Overall, Hard Target is one of Jean-Claude Van Damme’s finest hours oozing with style, classic action scenes and memorable villains making it still hold up as one of the best actioners of the 90’s.