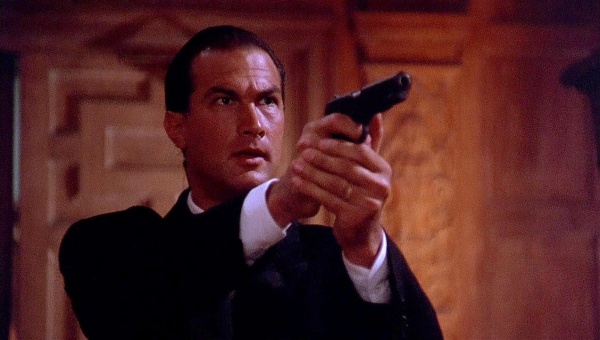 Hard to Kill is one of the best Seagal flicks and essential for any action fan’s collection!

Plot: When police detective Mason Storm (Steven Seagal) uncovers ties among corrupt cops, the mob and charismatic politician Vernon Trent (Bill Sadler), a hit is ordered on his family. During the attack, Storm’s wife is killed, and the cop himself is severely injured. After waking up from a years-long coma, Storm, aided by gorgeous nurse Andy Stewart (Kelly LeBrock), slowly gets back on his feet and plots revenge against those who wronged him, particularly the duplicitous Sen. Trent.

Review: Hard to Kill could well be my favourite Steven Seagal film; it’s so hilariously entertaining that I have probably watched it more than any other Seagal flick.

It has choice one-liners like “I’m gonna take you to the bank Senator Trent… The Blood Bank!”

This was Seagal in his absolute prime; I love how me manages to play everything with a completely straight face which only makes it even more fun. His character is fabulously monikered Mason Storm which is one of the best action hero names of all time.

Arguably one of the finest moments is during a rather epic training montage as Storm is nursed back to health by Kelly LeBrock; she smiles wistfully and as he trains and whips “Mason Storm”. He’s just like sooo dreamy.

William Sadler is always a great value bad guy and Senator Trent is one of his best roles. There are some nasty henchmen in this movie too and one of them gets stabbed in the face with a pool cue at the end.

One thing I have to give props to Seagal for is that he is probably the most vicious of all the action stars. He doesn’t just kill bad guys… he destroys them.

There is plenty of satisfyingly violent retribution so your bloodlust will be suitably satiated by the end credits.

There is a rather awesome electric guitar flavoured music score too which is at its best during the training montage which will inspire you to go run up a mountain or punch holes in trees.

Overall, Hard to Kill is one of the best Seagal flicks and essential for any action fan’s collection!