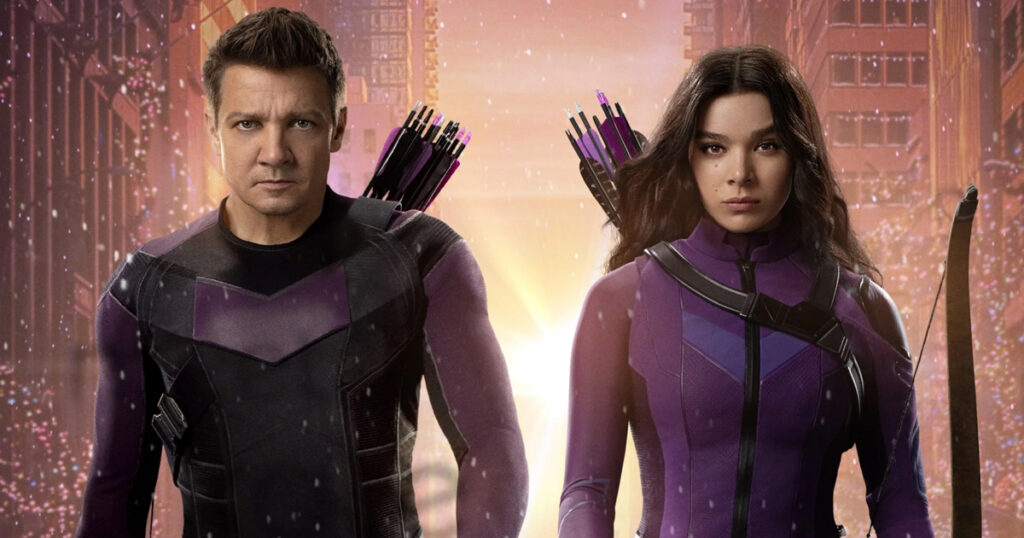 Hawkeye does nothing revelatory and it’s the final two episodes which elevate it but I like Hailey Steinfeld as Kate Bishop and Jeremy Renner is at his surly best as Clint Barton. There aren’t any particularly memorable action set-pieces so Daredevil is still the best live action Marvel show for me in that respect.

Plot: One year after the events of Avengers: Endgame (2019), Clint Barton must partner with Kate Bishop to confront enemies from his past as Ronin in order to get back to his family in time for Christmas.

Review: I go into spoilers here so if you haven’t finished Hawkeye yet then best hold off reading any further.

I haven’t really been blown away by the MCU since Endgame but I‘ve still found something to enjoy in the Disney+ shows mostly just for an escape from reality while we’ve all been stuck at home.

Hawkeye was always seen by many as the least interesting Avenger as he has no powers and only uses a bow and arrow but Jeremy Renner brings the right amount of cynicism and world weariness to make the character sympathetic. He also has a few choice one-liners making almost feel like an old-school action hero.

In this (rather short) 6-episode season Hawkeye is trying to get home for Christmas to spend quality time with his family however, when he finds out that someone is posing as Ronin (which he portrayed in Endgame) he sticks around in New York to find out what’s going on. There he meets Kate Bishop (Haley Steinfeld) who has always looked up to Hawkeye after seeing him fight in the battle of New York.

The pair reluctantly team up to investigate some suspicious goings on and are led to the Tracksuit Mafia who surprisingly provide a lot of the show’s laughs so the tone is kept light while still maintaining some drama.

I have to admit around the second episode of Hawkeye I nearly gave up on it as the story seemed to lack urgency and the LARPers just killed the pacing. Even the action scenes weren’t especially memorable however, it has its moments and frankly I just enjoy anything set around Christmas time.

I’m glad I stuck with it as it came in to its own for the final two episodes; Hailey Steinfeld is immediately appealing as Kate Bishop (just the right side of annoying) with her enthusiasm to follow in Hawkeye’s footsteps. The pair make for a fun duo with enjoyable banter and it’s the season finale alone that makes this series worth checking out. We were promised a “big bad” but I wasn’t expecting it to be Wilson Fisk AKA THE Kingpin (played once again by the perfect Vincent D’Onofrio once again) who admittedly is my favourite villain of the entire MCU so far.

My only gripe there is that Hawkeye never actually gets a scene with him but maybe we’ll get that in the inevitable second season. Bringing back Fisk also just reminded me of other better Marvel shows like Daredevil or The Punisher and it made me wish we had another season of them instead.

Vera Farmiga is as wonderful as ever keeping us guessing as to what she is up to as Kate’s mother and she can say so much with just her eyes. It’s nice to see the return of Florence Pugh as Yelena who has some fantastic scenes with Kate. This continues on where Black Widow left off so it helps to have seen that before watching Hawkeye.

I thought Alaqua Cox was awesome as Maya Lopez / Echo and one of the best episodes was about her losing her hearing and Hawkeye also dealing with having a hearing aid. As someone who has also dealt with the same thing it was nicely done while also making for uncomfortable viewing due to the sound effects.

At only 6 episodes the series ends just when things are getting interesting and I need more Wilson Fisk in my life. So can we have season 4 of Daredevil now, please?

Overall, Hawkeye is hit and miss (deliberate pun); we get good performances from the cast and Hailey Steinfeld and Jeremy Renner make for an appealing pair. The pacing could have been tighter in some episodes but the finale redeems most of the problems I had with it making it diverting entertainment for the Christmas period.