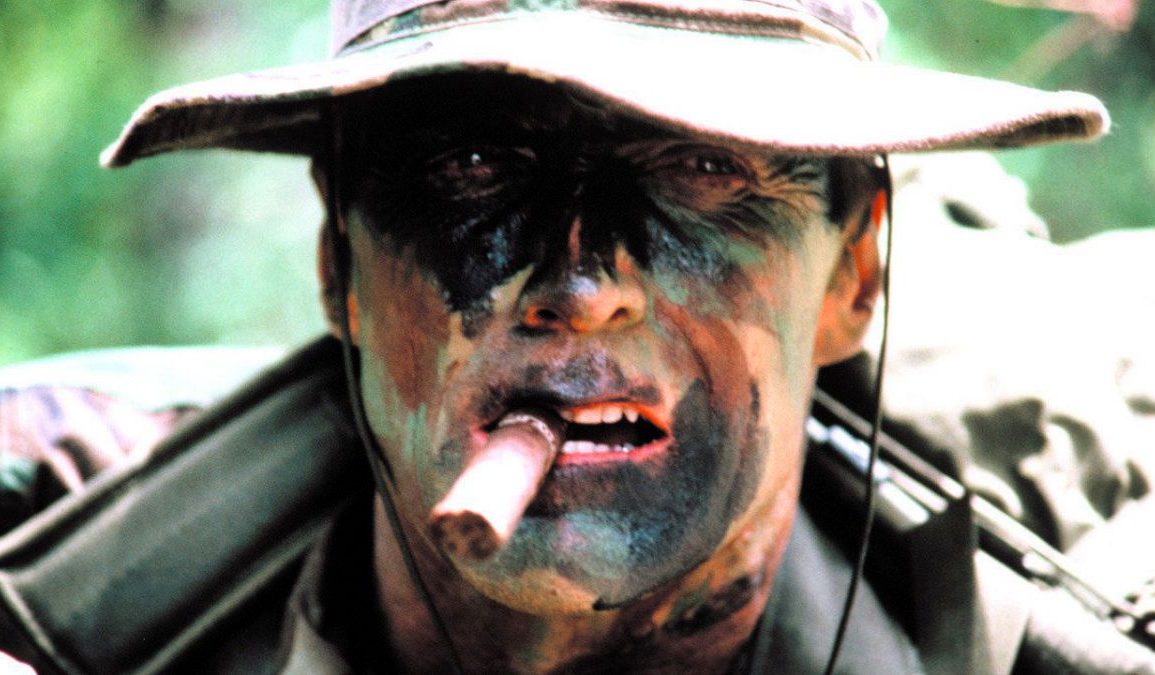 Plot: Marine Sgt. Thomas Highway (Clint Eastwood) is a decorated veteran of two wars. On his last posting before retirement, he is surrounded by officers with no combat experience who view him as an odd, even dangerous, holdover. Highway is assigned to train a group of undisciplined recruits including Cpl. Stitch Jones (Mario Van Peebles), a slick hustler who has previously encountered Highway. As the old soldier prepares his men for a war they don’t believe will come, the U.S. invades Grenada.

I didn’t watch this movie for the longest time as I thought with a title like “Heartbreak Ridge” it was going to be depressing; boy was I wrong and after watching it for the first time it rapidly became one of my favourite Clint Eastwood movies.

I consider Gran Torino an unofficial sequel to this movie as Thomas Highway reminds me of Walt Kowalski, both of whom are grouchy old bastards with gravelly voices. As with the majority of Eastwood films Heartbreak Ridge has a snappy script with some choice one-liners with Clint hurling abuse at pretty much everyone. He feels like a believable gruff Marine who has been through a lot and seen it all however, this was based on a true story and apparently the army didn’t like the way Highway was portrayed; check out this detail from Wikipedia:

Screenwriter James Carabatsos, a Vietnam veteran of the 1st Cavalry Division, was inspired by an account of American paratroopers of the 82nd Airborne Division using a pay telephone and a credit card to call in fire support during the invasion of Grenada, and fashioned a script of a Korean War veteran career Army non-commissioned officer passing on his values to a new generation of soldiers. Eastwood was interested in the script and asked his producer, Fritz Manes, to contact the US Army with a view of filming the movie at Fort Bragg.

However, the Army read the script and refused to participate, due to Highway being portrayed as a hard drinker, divorced from his wife, and using unapproved motivational methods to his troops, an image the Army did not want. The Army called the character a “stereotype” of World War II and Korean War attitudes that did not exist in the modern army and also did not like the obscene dialogue and lack of reference to women in the army. Eastwood pleaded his case to an Army general, contending that while the point of the film was that Highway was a throwback to a previous generation, there were values in the World War II- and Korean War-era army that were worth emulating.

Eastwood approached the United States Marine Corps, which expressed some reservations about some parts of the film, but provided support. The character was then changed to a Marine. (This raised some conceptual difficulties, given that the Battle of Heartbreak Ridge primarily involved the Army. This is explained very briefly in the film when Sergeant Major Choozoo tells Stitch Jones that he and Highway were in the 23rd Infantry Regiment at the time and “joined the Corps later.”) The Marine Corps first cooperated with the film project by allowing much of the filming to be done at Camp Pendleton. The Marines planned to use it to promote its “Toys for Tots” campaign, but upon viewing a first cut, quickly disowned the film because of the language.

Marines who viewed the film cited numerous issues with the way they were portrayed. Major Powers, the battalion’s S-3 Operations Officer, is repeatedly shown disparaging and insulting Gunny Highway, as well as showing blatant favoritism regarding “his” Marines of the First Platoon. In reality, this would have been extremely unlikely, given Highway’s Medal of Honor. Much of the “training” done before the Grenada invasion was highly inaccurate, including the fact that Highway’s Marine Recon unit did not have a Navy corpsman to deal with his men if injured. Even on a relatively small budget, the technical advice was poor. The Defense Department originally supported the film, but withdrew its backing after seeing a preview in November 1986.

I love reading about behind the scenes info on movies and Heartbreak Ridge was not without its issues. Despite all of the above I still love the film and I could watch it on repeat; It’s the type of movie we wouldn’t get these days and was a surprisingly feel-good ‘men on a mission’ movie where no major characters die.

I have always been a massive fan of Mario Van Peebles but I did find his character Corporal “Stitch” Jones a little annoying and he felt very much like a product of the 80’s. I also thought the way a lot of the Marines behaved would surely not be tolerated so it’s understandable that some weren’t impressed with the final product.

In terms of action we have multiple fist fights and an action-packed final half hour as our ragtag group of Marines go into Grenada to rescue some hostages but in-between we get several nice character moments as Highway slowly gets reacquainted with his ex-wife while also winning over his unit.

Highway not only has to contend with a group of misfits but a Major called Malcolm Powers (Everett McGill) who starts off as a complete tool… and ends that way too. He’s pretty much the antagonist of the film and felt a little overly cartoonish but he is always fun to watch. His fight with Highway is thoroughly satisfying too…

I always though Eastwood’s performance in Heartbreak Ridge was a template for the Batman voice as he’s so gravely in it all I see is Batman when he speaks. They really should have done a Dark Knight Returns move with him as an older Bruce Wayne.

Anyway, Heartbreak Ridge remains a bit of a classic with Eastwood at his one-liner spewing best with plenty of action and an engaging story so if you haven’t seen it I highly recommend picking it up.