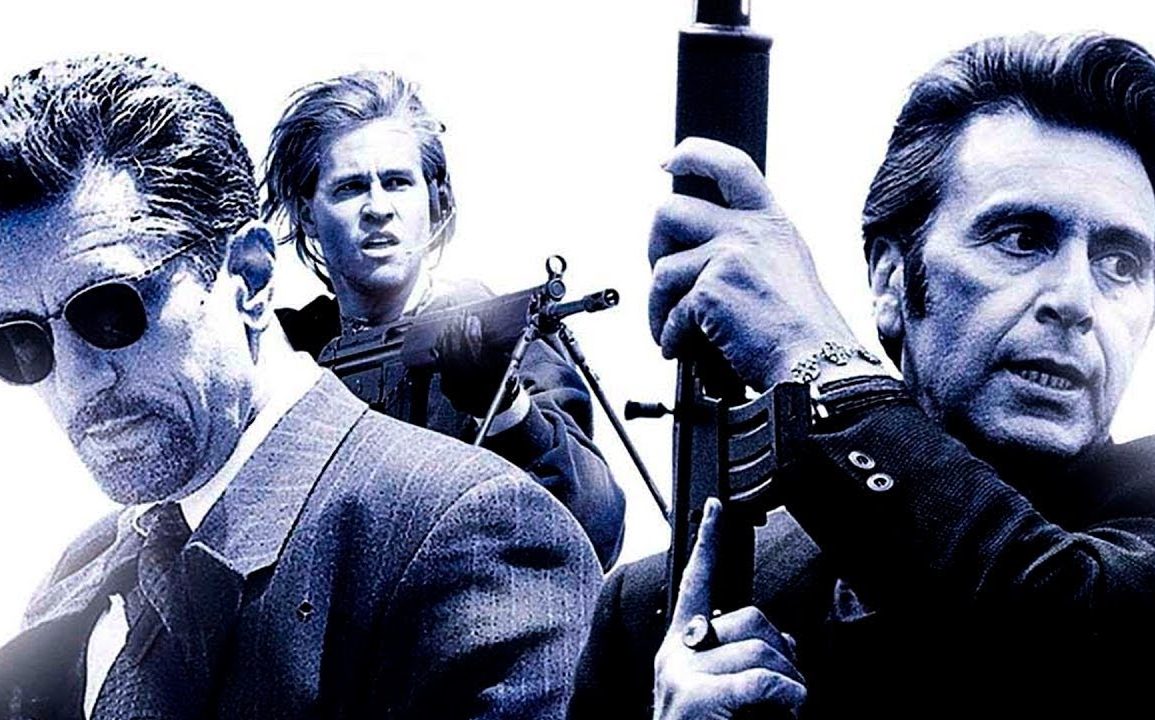 Al Pacino’s overacting may put some off but De Niro is magnetic and Heat is still a classic of the genre. The director’s cut Blu-ray is the best version tweaking some of the dialogue and remastering the sound and visuals to perfection. For the shoot-out alone this is a must-see.

Plot: Master criminal Neil McCauley (Robert De Niro) is trying to control the rogue actions of one of his men, while also planning one last big heist before retiring. Meanwhile, Lieutenant Hanna (Al Pacino) attempts to track down McCauley as he deals with the chaos in his own life, including the infidelity of his wife (Diane Venora) and the mental health of his stepdaughter (Natalie Portman). McCauley and Hanna discover a mutual respect, even as they try to thwart each other’s plans.

Review: Here’s a not very interesting tidbit – My three favourite directors are John Carpenter, Walter Hill and Michael Mann. It’s hard for me to pick a favourite movie from Mann but it’s between Thief, Collateral and Heat.

Heat is undeniably a classic film from the performances to the cinematography and the music; considering it is nearly 3 hours long it never drags giving every character time to breathe while also providing us with some of the best shoot-outs ever committed to film.

This was the first time we get to see two acting icons on screen together – Al Pacino and Robert De Niro but if we’re honest this is De Niro’s movie as he is restrained and never loses his cool. Al Pacino on the other hand is grandstanding from beginning to end overacting and shouting unnecessarily at every opportunity. It used to bother me but after watching the film again last night Pacino’s loudmouth cop Vincent Hannah gives the movie its personality with his quotable dialogue with lines like “GREAT ASS!” which never fails to make me laugh.

It’s funny how you empathise with the criminal more than the cop in Heat as De Niro just brings that icy cool to the character and seems more in control of things unlike Pacino’s cop whose personal life is a mess and he mostly comes across as arrogant.

What’s interesting is that the Blu-ray is a little different from the version I remember as I recently got the Director’s Cut; two moments are changed (per IMDB):

Personally, I’m glad they were removed especially the “detritus” line as I felt that speech didn’t sound natural. I can’t remember the last time I ever heard anyone say “detritus” in a conversation in real life. For me this truly is the best version of the film as it has been superbly remastered with crystal clear visuals and audio so it has never looked or sounded better.

Michael Mann is so good at selecting the music to all of his films and Heat’s soundtrack is one of his best with every tune perfectly blending in with the story and visuals.

Kevin Gage has rarely been more sinister as Waingro, the unhinged new member of McCauley’s crew who has an itchy trigger finger and just likes to kill people.

The most sympathetic character of the entire tale is poor Eady (Amy Brenneman) who Neil McCauley (De Niro) falls for; she is such a pure character and the only one who hasn’t been corrupted by the choices they have made. Both Hannah and McCauley live for their jobs and their relationships always suffer because of it.

Every time I watch the movie when Neal and Eady are in the car I shout at the screen telling him to forget Waingro and just go the airport as he could have escaped scot free but you know he wouldn’t as he could never live with himself.

The bank robbery and ensuing shoot-out are expertly crafted and the sound of the gunfire is utterly deafening making it all the more visceral and easily one of the best of the genre.

Overall, despite Al Pacino’s hilarious overacting Heat is still an incredible achievement with one of the all-time greatest casts, memorable characters, jaw-dropping shoot-outs, perfect music and cinematography making it essential for any lover of cinema.