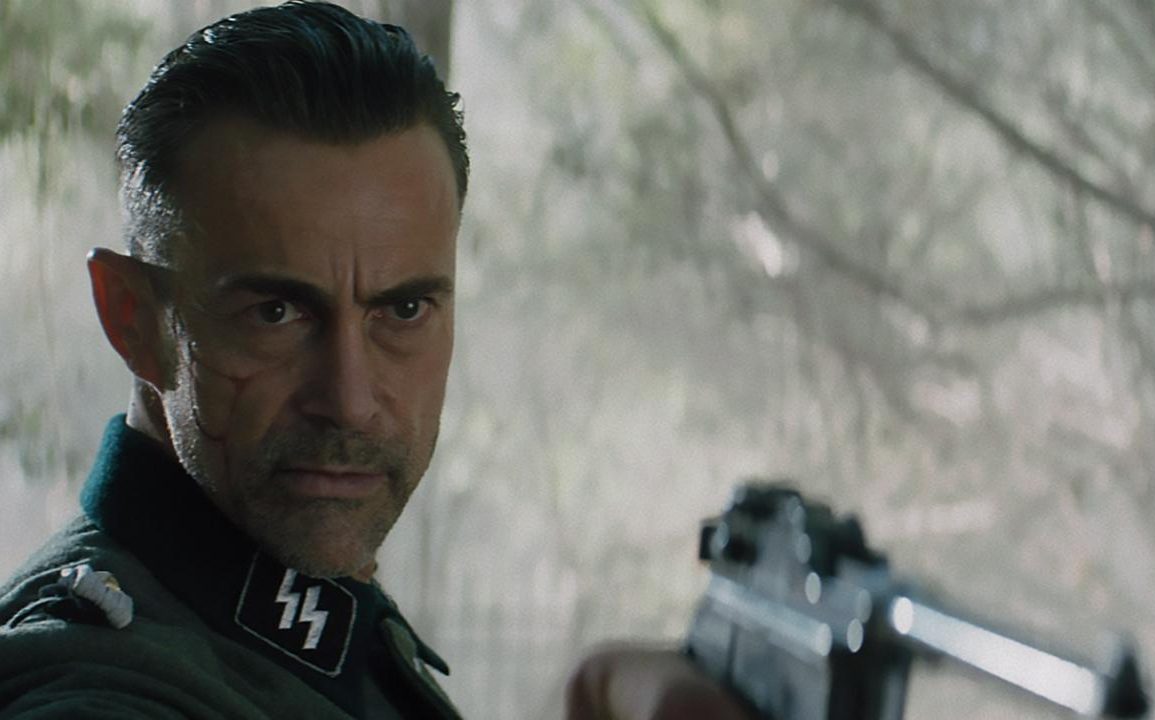 Although not quite up there with Avengement, Hell Hath No Fury is still brutally entertaining with winning performances from Nina Bergman and Daniel Bernhardt; it’s unpredictable and keeps you guessing as to how it’s all going to play out so it’s definitely worth a watch.

Plot: Branded a traitor by her countrymen, French national Marie DuJardin is rescued by American soldiers on one condition: to survive, she must lead them to a cache of gold hunted by the Nazis, the French resistance, and the Americans alike.

Review: Jesse Johnson is one of my favourite action directors working today because he isn’t afraid to try something different; Hell Hath No Fury is his latest picture with a cast that includes Nina Bergman, Daniel Bernhardt and Louis Mandylor. If you’re expecting a movie like Avengement or Triple Threat you may be disappointed as this isn’t that kind of tale but there is still plenty of R rated action and bloody kills.

Nina Bergman is our lead Marie who is having a love affair with SS Officer Von Bruckner (Bernhardt) but she ends up being branded a traitor by her own people; what they don‘t know is that there might be more to Marie than meets the eye and when a group of American soldiers “rescue” her so they can find some gold we are constantly questioning whose side she is really on. Bergman gives a wonderfully controlled performance where we never know what’s going on inside her head so it keeps things unpredictable.

As always the scene stealer is Daniel Bernhardt who has a commanding presence and even though he is playing an SS Officer Von Bruckner is an interesting character who isn’t a one note villain. He genuinely loves Marie and feels like a real person rather than a cartoon which he could easily have been.

For the majority of this tale it’s hard to root for anyone as the main character is arguably greed itself and how it consumes nearly everyone; this makes the American soldiers (led by Louis Mandylor) arguably the real villains so we are never wanting them to succeed which a is a refreshing switch from movies like Kelly’s Heroes which also involves a group of soldiers looking for gold.

Mandylor always makes for an intimidating force onscreen and its no different here; although he isn’t a monster he still isn’t an especially sympathetic character however, (minor spoiler alert) I’m not sure he deserved what happened to him at the end.

I do love movies like this as there is something about wartime capers that are perfect to watch on a Saturday afternoon and I can see Hell Hath No Fury becoming a cult classic in the coming years.

In terms of flaws I’d say that it takes a little while before the action kicks in but it needs to give us time to get to know the characters and their motivations.

Dominique Vandenberg shines as a French resistance fighter who is in love with Marie despite her never really taking any notice of him; it’s hard to believe this is the same actor that was in The Mercenary as he looks totally different and gives an excellent performance.

The score doesn’t disappoint either helping to keep things tense and exciting especially during the climactic shoot-out.

Overall, Hell Hath No Fury may not be as action packed as Avengement or Triple Threat but Nina Bergman and Daniel Bernhardt especially stand out and there are plentiful vicious R rated kills to keep action fans happy.