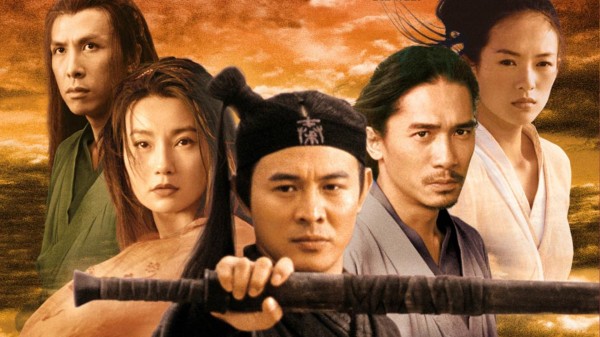 Hero is a classic martial arts movie and utterly essential for fans looking for not only a visual feast, but a story with depth too.

Plot: One man defeated three assassins who sought to murder the most powerful warlord in pre-unified China.

Review: It’s a rare thing to describe a martial arts movie as “breathtakingly beautiful” but I definitely think that Hero fits that description nicely.

It’s arguably the most beautiful and moving martial arts movie I’ve ever seen. I found myself genuinely caring about the characters and by the end I’m usually a teary eyed mess… but they are tears of manliness, obviously.

The story is unpredictable and every scene looks like a painting; stunning landscapes mixed with the wonderful score really help to create this almost fantastical world. I say fantastical because of the wire-fu fight scenes. I will admit that I’m not a huge fan of wirework in martial arts movies, I prefer it to be a bit more hardcore but they really do work well in Hero.

The best scene is easily the fight between Jet Li and Donnie Yen and seeing these two legends battling it out is as spectacular as you’d expect. There is a bit too much slo-mo but it’s just so darn stylish that I can’t really complain.

Jet Li is the Nameless Hero; he has a lot of fight scenes and is a man who really only wants revenge for the death of his family, which he blames the Emperor for. Aside from that he is arguably the least interesting in terms of character and personality.

I do find Flying Snow (Maggie Cheung) a bit of an unsympathetic bitch though; I know that’s kinda the point but still, she could have been a bit more likeable. You so want her and Broken Sword (Tony Leung) to just be together and she can’t get over he resentment that he botched a previous assassination attempt on the Emperor.

I think Leung is a fantastic actor with an incredibly expressive face, like Donnie Yen actually. He can say so much with his eyes; his longing for Flying Snow, how he wants what’s best for his land and his many regrets.

He arguably steals the movie, but my favourite character is actually the Qin Emperor himself, played by Daoming Chen. Qin is a man conflicted with what’s best for his country and how he can achieve it… even if it it does require bloodshed. He is not a monster, but a man who wants to finally unite the warring provinces to create one country… which he eventually does.

Dying for something is one of the key themes, which is stated at the start of the movie; “people die for all sorts of reasons, for friendship, for love, for an ideal…and people kill for these same reasons also.” So yeah, pretty much everyone dies at the end and you’re left feeling kinda depressed…and yet I find it more uplifting because they all died serving the greater good.

When the Emperor eventually gives the order to have the Nameless Hero killed at the end, it is with great regret and only because he was being forced to by his army. It reminded me of Pontious Pilate and the crucifixion of Christ with the whole “Crucify Him!” thing going on.

I’m rambling a bit here so I’ll sum up by saying that Hero is a classic martial arts movie and utterly essential for fans looking for not only a visual feast, but a story with depth too.