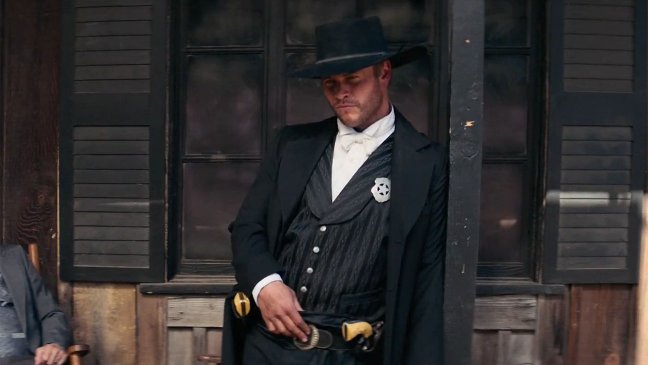 Hickok doesn’t really bring anything new to the Western genre but it’s a well-paced 90 minutes and Luke Hemsworth is a charismatic lead with Trace Adkins a surprisingly sympathetic “villain”.

Plot: Legendary lawman and gunslinger, Wild Bill Hickok, is tasked with taming the wildest cow-town in the west. While delivering his own brand of frontier justice, the infamous gunfighter’s reputation as the fastest draw in the west is put to the test.

Review: I always love a good Western and Timothy Woodward Jr.’s last one Traded was really entertaining. Hickok is his latest trip back to the Wild West with Luke Hemsworth in the lead role of legendary gunslinger Wild Bill Hickok… thus the title.

Hemsworth may not have the same name recognition that his brother Chris has but I really liked him in this movie he has screen presence and charisma and I think he has a bright future ahead.

Bill Hickok is a man trying to outrun his demons but when he is asked to become Marshall of a town he eventually decides it’s time to face them head on.

Poe was an interesting character who wasn’t your typical one note villain; he actually starts off as perfectly reasonable but is essentially pushed by Hickok who changes a few rules in the town which adversely affects Poe’s business. Trace Adkins is great on screen although judging by his voice you could tell he was channeling Sam Elliott.

Bruce Dern and Kris Kristofferson are always welcome additions as you just feel that if they belong in that era. Dern doesn’t have much to do and it’s more of a glorified cameo but it was till great to see him in any capacity.

Considering this is a low budget feature there isn’t anything that spectacular in terms of action but I find with Westerns there doesn’t need to be. You need to soak it in and enjoy the atmosphere with a few shoot-outs thrown in for good measure. There isn’t any sense of urgency to the plot so it never gets all that tense (even by the finale) and by the end of the film you want to hate Poe but you kind of sympathize and can see why he hates Hickok as much as he does.

Hickok is only 90 minutes long so it’s never dull and as I keep saying it’s nice to see a movie that is under 2 hours long. However, I wonder if a movie about one of the all-time legendary cowboys maybe deserved a longer runtime as this only covers a short period of his life but I imagine that was purely for budgetary reasons.

Overall, Hickok doesn’t really bring anything new to the Western genre but it’s a well-paced 90 minutes and Luke Hemsworth is a charismatic lead with Trace Adkins a surprisingly sympathetic “villain”.