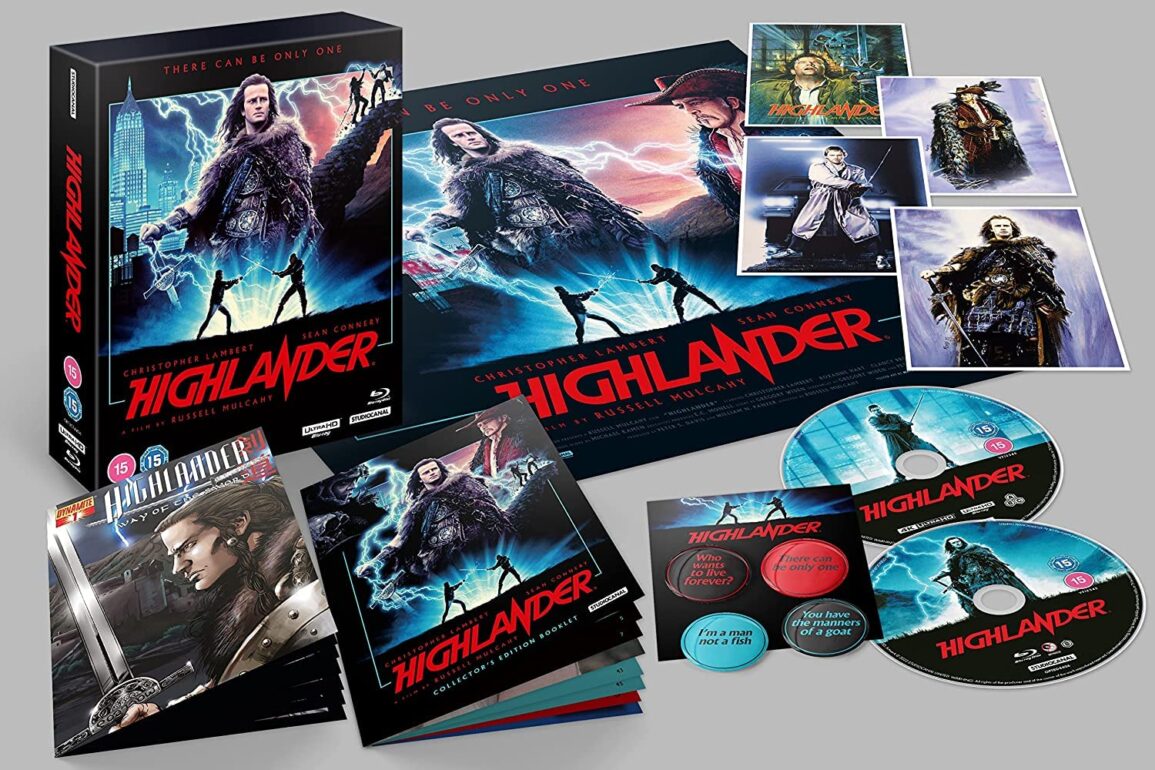 Highlander was unlike anything that had come before and still is one of my favourite movies due to the memorable characters, exploration of immortality and of course the regular sword fights. This Collector’s Edition is packed with hours of features to keep diehard fans engaged and is a must-have.

Plot: Christopher Lambert and Sean Connery star in 1986 cult classic HIGHLANDER. He fought his first battle on the Scottish Highlands in 1536. He will fight his greatest battle on the streets of New York city in 1986. His name is Connor MacLeod. He is immortal. After surviving a wound that should have killed him during a clan battle in the Scottish Highlands in 1536, Connor MacLeod (Christopher Lambert) is banished from his village. Years later, he is met by Juan Sanchez Villa-Lobos Ramirez (Sean Connery), a swordsman who teaches MacLeod the truth about himself, he is immortal; one of a race of many who can only die when the head is cut from the body. He must fight his way through the centuries until the time of The Gathering, when the few immortals who have survived the ages will come together to fight until only one remains. In New York City the final fight is about to begin, and in the end, there can be only one

Review: It had been a few years since I last watched Highlander and for some reason I totally forgot it was a Cannon film which now makes me love it even more.

It feels like only yesterday when I had watched this movie for the first time and now all of a sudden it’s over 36 years old; I always found Highlander to be a very strange and imaginative film unlike anything I had seen before. The story is way out there and genuinely original and it really resonates with you as a viewer as you get older and start to think more about your own mortality.

The scene of MacLeod (Christopher Lambert) sitting with his aged wife who is dying in his arms as he remains the same age is the most heartbreaking scene of the movie; the use of Queen’s “Who Wants to Live Forever” is simply perfect in capturing the mood.

One of the best elements about Highlander is the music; Michael Kamen’s epic score along with Queen’s still transcendent songs really provide a great atmosphere; it’s such a shame that Kamen and Freddie Mercury passed away so young (RIP).

Christopher Lambert does one of the most hilarious Scottish accents I’ve ever heard, but he still manages to be sympathetic in it. His brooding eyes add to his charisma and screen presence; Highlander made me a fan of his ever since especially in movies like Fortress and Gunmen.

Sean Connery chews the scenery as Ramirez who is apparently of Spanish/Egyptian descent and yet still doesn’t even bother with an accent, but the way I see it is he’s over 2000 years old so his accent is bound to change over time.

The movie practically belongs to Clancy Brown who plays the The Kurgan; although he is an over the top villain he is simply magnetic and his voice is perfectly menacing. No one says “hello pretty” like he does. The scene in St. Patrick’s where he talks with MacLeod is another highlight and to this day he remains one of the best movie villains of the 80’s.

One thing I love about Highlander is the fact that the scenes in Scotland are actually filmed there. Shot in and around Eilean Donan Castle, Glenfinnan and Glencoe my homeland has rarely looked better especially in 4K. I also love how in movies from the 80’s there is a smokiness to them which helps almost give an otherworldly feel to it.

This new collector’s edition maintains the filmic quality keeping the grain although it could have been cleaned up a little; the audio was fine and I had no issue with that. It’s especially interesting watching the film with subtitles as there were several lines of dialogue where I didn’t know what they were saying before so that was a bonus. This edition has hours of special features with the cast and crew about the making of the film.

It’s nice to have the special features on the 4K for once as I find with most releases they are on the Blu-ray only; the documentary THE IMMORTAL ATTRACTION OF HIGHLANDER: Looking back at four decades of Highlander magic is an hour long featuring interviews with the major players talking about making the film. Clancy Brown’s interview is also fascinating as he discusses wearing chain mail while trying to ride a horse and much more. If you’re a fan of this film then this set is a must-have as I have barely even scratched the surface of all the features.

Overall, Highlander remains a fun, imaginative fantasy/action film that will live forever. It’s legacy includes multiple sequels, a TV series and a cartoon with a remake in the works starring Henry Cavill. Studio Canal puled out al the stops here with hours of  special features and although there is more grain than I would like the film looks as good as a movie from 1985 can and the audio is better than ever too making this the definitive version of Highlander. Also, this has that stupid warning before it about harmful stereotypes or something like all Studio Canal releases which is dumb – some immortals may be offended.