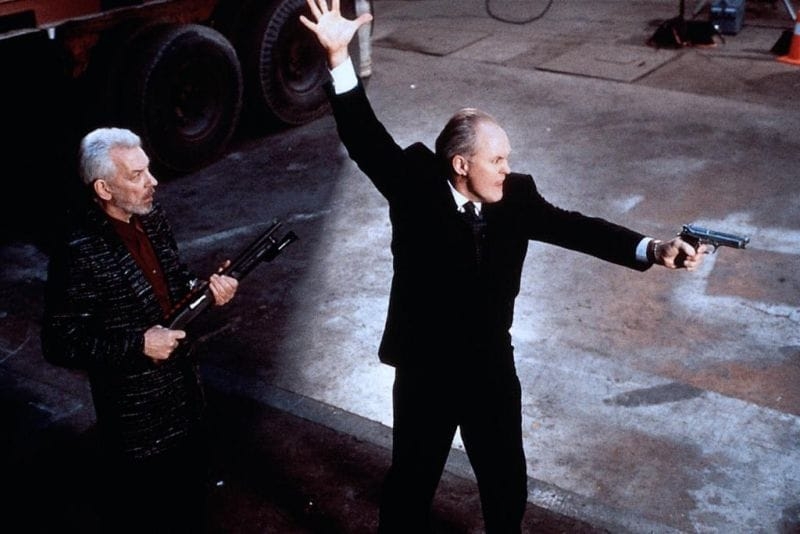 Hollow Point has a more comedic tone than you’d maybe expect keeping things light and silly but the cast are game and Thomas Ian Griffith and Tia Carrere make for a fun duo with John Lithgow never less than an entertaining villain.

Plot: Diane (Tia Carrere), who works for the FBI, has been on the trail of international criminal Thomas Livingston (John Lithgow), but her operation is compromised when DEA Agent Max Parrish (Thomas Ian Griffith) arrives on the scene. With both the FBI and the DEA trying to capture Livingston, Diane and Max are forced to work together. Quickly the pair realizes their best chance to nab Livingston is to find a hired gun named Garrett (Donald Sutherland), who was swindled by their target.

Review: With a cast that includes Thomas Ian Griffith, Tia Carrera, Donald Sutherland and John Lithgow you’d be forgiven for thinking that we were in for an intelligent and high quality action thriller. What you may not expect is that this is very much a comedy with a goofy tone more akin to Hudson Hawk. I only watched Hollow Point for the first time the other day as we were asked to review more Thomas Ian Griffith movies by a fan so this was first up.

It is hardly a classic action movie but it sure is fun with Thomas Ian Griffith looking like he is having a blast as the wise cracking (and kind of dick-ish) DEA Agent Max Parrish who wants to team up with the not unattractive FBI Agent Diane (Tia Carrere) to take down criminal Thomas Livingston (Lithgow).

Hollow Point is packed with explosions and shoot-outs with a few laugh out loud moments but the script lets it down and it isn’t as funny as it thinks it is. It’s actually John Lithgow who owns this movie as he has some of the best lines. Donald Sutherland’s assassin Garrett is a very strange character with some weird dialogue and singing songs about “Uranus” so I wasn’t sure how I was supposed to feel about him. He ends up teaming up with Max and Diane to take down Thomas who decided he wants Garrett dead.

There are a few twists and turns and Thomas Ian Griffith and Tia Carrere look good on screen together as they trade banter (and blows); the action is slick and it’s always nice to see real explosions and stunts.

At an hour and 38 minutes it’s a brisk watch with a high bodycount but the odd tone almost makes it feel like a live action cartoon.

Overall, Hollow Point is an entertaining action comedy with a solid cast and a few funny moments; it’s maybe not what you’d expect and I think I will like it more with future viewings but the tone may put some off or do the opposite and you’ll love it.