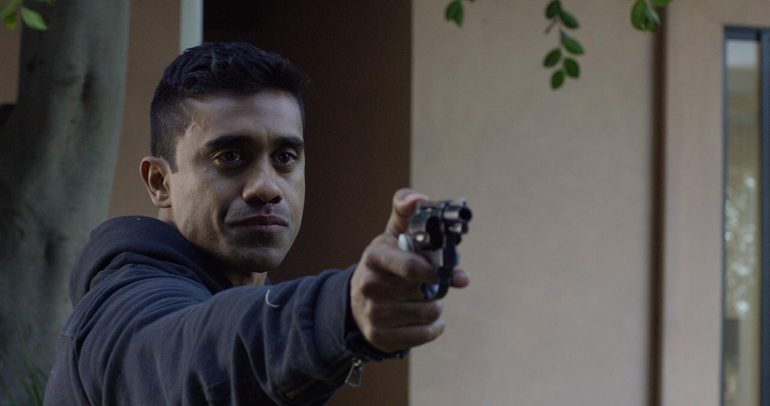 Hollow Point isn’t just action for the sake of it while saying something about the state of the US justice system but there are also enough beatdowns and vigilante action to keep fans happy.

Plot: When his wife and daughter are senselessly murdered, a grieving man finds himself caught up in a war between a group of charismatic vigilantes and the crime that infests their city.

Review: I’ve been looking forward to Hollow Point for a long time; for one thing my pal Chad Law wrote it with his brother Evan and director Daniel Zirilli. It also has a great cast that includes Luke Goss, Michael Pare, JuJu Chan, Dilan Jay, Bill Duke and Jay Mohr.

Jay Mohr played one of my favourite underappreciated villains in the slasher flick Cherry Falls a few years back but he was mostly darkly comedic in that movie; in Hollow Point he is just as evil as they come and makes for a great and surprisingly threatening antagonist.

Our protagonist is good-natured family man Nolan Cooray (Dilan Jay) who is a lecturer that believes in the justice system but when his wife and child are executed in cold blood with the killer walking free he loses faith in the judicial system. He decides to take justice into his own hands and goes after Trigger (Jay Mohr), the man who killed his family but things don’t go well and he ends up in jail. There he meets a lawyer called Hank Carmac (Luke Goss) who sympathizes with his case and works to free him from prison; when he eventually gets out he joins Hank and is crew in delivering their own brand of justice.

Hollow Point asks the usual questions from vigilante movies like how far is too far and what makes the vigilante better than the criminals they are going after; this always makes for entertaining viewing as I enjoy being challenged that way.

Despite the limited budget Hollow Point still manages to be gritty and engaging with Dilan Jay giving a star making performance as Nolan; we really get to hate Trigger and count down until he gets what he deserves. I’m a big fan of Luke Goss so he was one of the main selling points and he gets to have several fight scenes and generally be badass. It makes for satisfying stuff even if it is the kind of story we’ve seen many times before.

Overall, Hollow Point delivers enough vigilante action to be worth checking out but it also has something to say about the state of the justice system in the US. The cast give their all and director Daniel Zirilli films the action well so there are worse ways to spend a Saturday night.