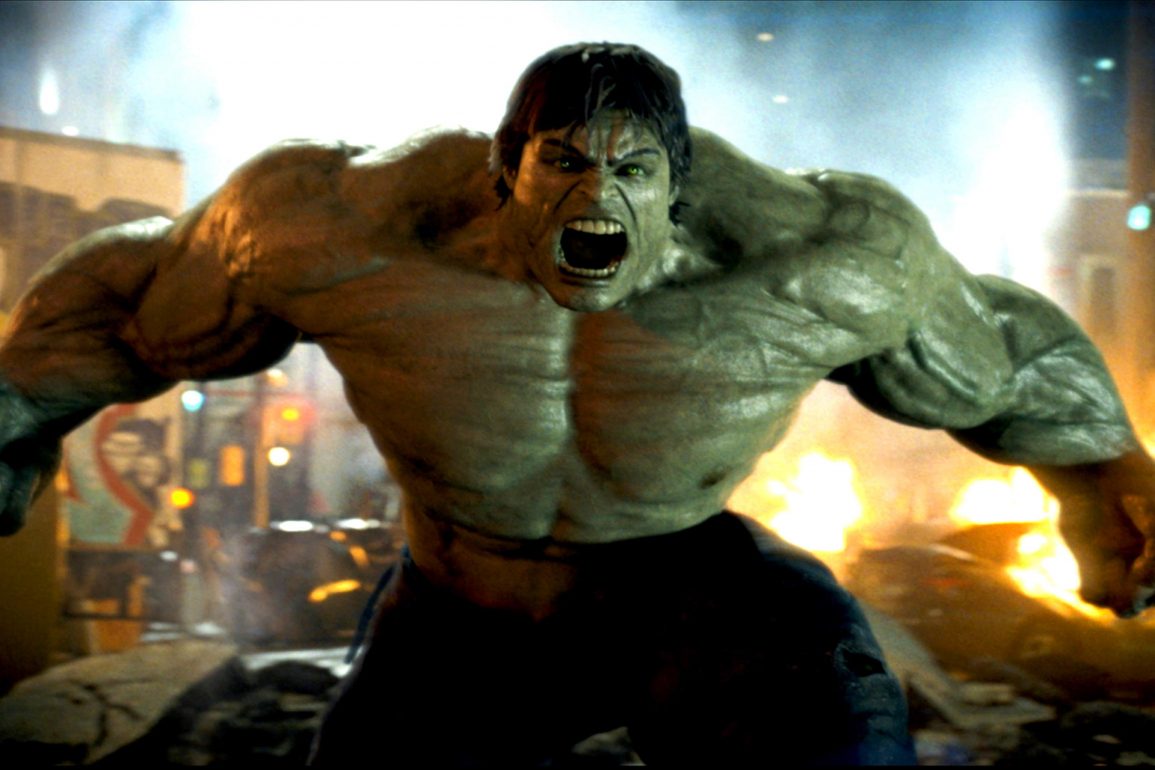 Great cast and Eric Bana did a great job as Bruce Banner, he displayed the right amount of conflict with his emotions and he made the role feel believable. The fact that he actually likes losing control and becoming the monster was a refreshing take on it. Jennifer Connelly was also lovely as Betty Ross and it’s a shame neither of them returned for The Incredible Hulk.  Sam Elliott and his mustache are excellent and my favourite thing in the movie.

It’s rather stylish and a lot of the visual effects are excellent; although the Hulk doesn’t quite look the way you’d expect the CGI is rather impressive and I’d say it may look a bit more realistic than the Incredible Hulk… well as realistic as a large green angry monster person would be.

Danny Elfman’s music score is very different from his Tim Burton fare and it has a very unique sound to it; although lacking a Batman style theme (which remains Elfman’s masterpiece) I do like the music and in some places it is rather moving.

What action there is, especially the Hulk throwing the tank about is nicely done and the set pieces are pretty impressive.

It spends time with the characters and you get to know them and care about them rather than just constant destruction.

But it’s a movie about the Hulk; we WANT constant destruction, that’s what he does after all!

Although the idea of filming it like comic strips is a nice idea, it does get annoying after a while.

It’s painfully slow in parts and just doesn’t have the feel of the Marvel universe.

Nick Nolte just growls and is mad and weird in it, he then turns into electricity at the end in a showdown which is too darkly lit to see anything.

The Giant CGI killer poodles; I know they were meant to be scary but they were the dumbest things I’ve ever seen, just ridiculous.

Like Ang Lee’s Hulk the cast are excellent; I still think it’s a damn shame Edward Norton couldn’t be in the Avengers (despite Ruffalo being great). I love Liv Tyler but I do think I prefer Jennifer Connelly as Betty Ross. I also prefer Sam Elliott as General Ross although William hurt is fine.

Craig Armstrong provides and excellent music score and I think I prefer this one to the 2003 version. It has a Hulk-ish sounding theme and even uses the tune from the TV series as a nice nod.

The final action sequence in Harlem (or Toronto where it was shot) is one of the best action sequences of a superhero movie. This movie pretty much delivers what you’d want from a Hulk movie, less talky, more smashy. Although it is rather synthetic looking, the effects are good and the Hulk looks more like you’d expect him to.

Tim Roth is a great bad guy and I want to see more of him/Abomination in future Marvel movies.

It’s very well paced and nicely directed. You won’t be checking your watch.

It fits I  nicely with the other Phase One Marvel movies.

Like I said some of it is very CGI-ish looking but not enough to take you out of it.

Actually, that’s about it…

Can you guess which one wins? Yes it is indeed The Incredible Hulk; great action scenes, especially the final fight, great cast and just an all round fun movie. I do think Ang Lee’s Hulk movie does have its moments though and deserves a second look from audiences…. If you can get over the poodles.