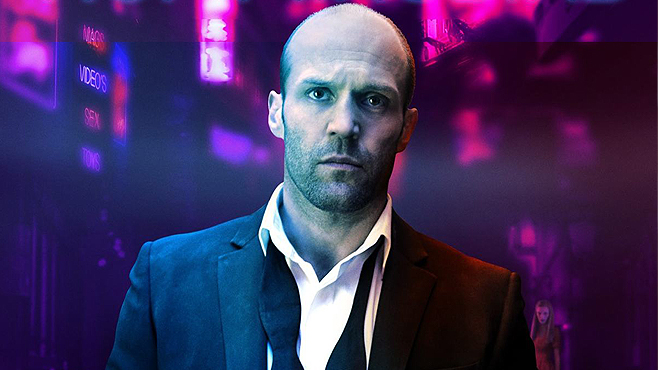 Hummingbird is one of Statham’s best acted movies and despite being well made and stylish, it’s a bit too grim to recommend and I have no urge to ever sit through it again.

Plot: Homeless and on the run from a military court martial, a damaged ex-special forces soldier navigating London’s criminal underworld seizes an opportunity to assume another man’s identity — transforming into an avenging angel in the process.

Review: I could tell from the trailers that this was not going to be your normal Statham movie with lots of action and one-liners. Hummingbird is more of a drama and the only action in it are a couple of brief fight scenes. Any of the violence in the movie isn’t exactly fun, but dark and pretty disturbing.

This is NOT a Transporter movie; London looks like a seedy, neon filled Hell where nasty people who do nasty things.

There’s a scene with a bad guy beating up a woman which is very tough to watch so I can’t exactly describe the movie as entertaining. What is lacks in a “fun” factor though it makes up for with excellent performances; Statham gives a career best and plays a broken man very well.

It’s all in the eyes and he looks haunted and quietly devastated from beginning to end; he’s a man riddled with guilt and he doesn’t even have to say anything.

Agata Buzek is fabulous as Cristina, a nun who befriends Joe (Statham) and helps him find a little redemption.

The movie isn’t all griminess though; there is some nice humour including Statham pretending to be a gay guy. That was hilarious but the scene when he meets Cristina at an exhibition with pictures of naked men cracked me up.

The story is unpredictable and the script is tight with a few nice bits of humour, but nothing that really stands out. Although it is a compelling drama, it has a pretty disappointing finale which is completely action free. I know this isn’t meant to be an out and out action movie, but still… would have been nice.

The score was atmospheric and really helped to create the seedy mood in making London look and feel dirty.

It’s filled with lots of neon and it’s refreshing that the city doesn’t look blue like it has done in recent movies. Steven Knight is also a director to watch as he knows exactly how to create a mood and get the tone spot on.

Overall, Hummingbird is one of Statham’s best acted movies and despite being well made and stylish, it’s a bit too grim to recommend and I have no urge to ever sit through it again. Bring on Homefront and Fast 7 instead.