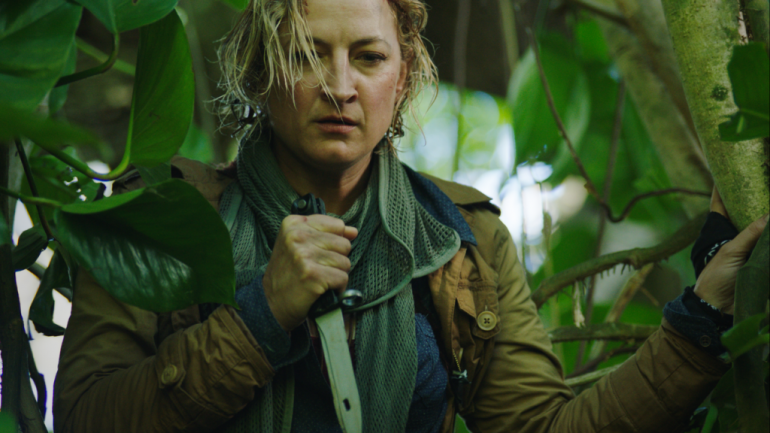 Plot: Violent missionaries pursue a war photographer (Zoë Bell) in the jungles of Colombia after she takes a picture of an atrocity.

Review: It’s funny how everyone is raving about Wonder Woman like it’s the only ever action movie with a female lead however, there are plenty of ladies out there kicking ass and one of the best in the business is Zoë Bell who is a stuntwoman and actress.

This movie was released last year under the title Camino but has been renamed to the more generic Hunted and is now out on DVD in Canada. It doesn’t matter what the name is though; all that matters is that it’s a rather awesome little indie actioner with Bell giving a career best performance as essentially a female Rambo.

Bell plays a photojournalist named Avery who captures the truth behind a group of missionaries who may not be what they seem. She ends up becoming hunted (thus the title) through the jungle but rather than being a victim she turns the tables on her pursuers and takes them out one at a time.

Hunted doesn’t skimp on brutal fights and satisfying kills and is arguably my favourite film with Zoë Bell as the lead (so far). He character of Avery is really quite different from the usual action hero and one of the most interesting aspects is at times you wonder about her sanity as she is always talking to her deceased husband. She isn’t an unstoppable one man army either but very vulnerable which keeps her believable and likable.

I thought the ending was satisfying and Francisco Barreiro made for an entertaining villain who wasn’t a total monster but came across more as desperate.

In terms of flaws it takes a little too long for things to get going and could maybe have trimmed a few minutes for pacing reasons and I found the score a little overly intrusive at times.