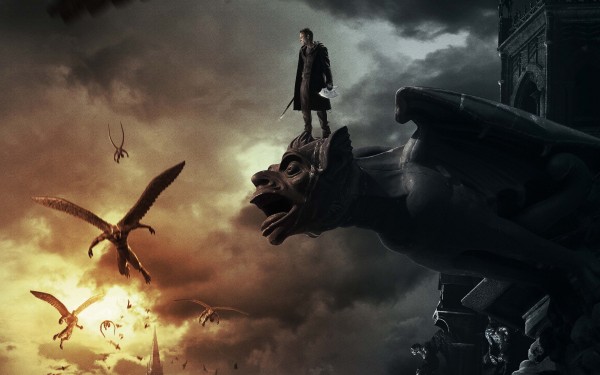 I, Frankenstein is a pleasing enough diversion with plenty of action and some nice visuals too. Go in with zero expectations and you just might find yourself transported away for a while.

Review: It’s funny how this movie is about a creature with no soul, as it describes the movie perfectly: Soulless. You will walk out of the theatre feeling nothing at all. Then why the (relatively) high star rating? Well, it was a pleasant diversion on a dreary Saturday afternoon; it had some spectacular Gothic visuals and nicely shot action scenes.

Yes, there is a lot of CGI and the gargoyles look frankly crap, but the cast pretty much save it. I’m a huge fan of Aaron Eckhart and find him very likable on-screen and still think that he doesn’t get enough credit for his role as Harvey Dent in TDK.

This Frankenstein’s monster is a bit of a badass and Eckhart is really cool in the role. He’s also super in shape and has a great stick fight with a demon half-way through.

This movie also has the added bonus of Bill Nighy who steals every scene with some bizarre facial ticks. I’m also slightly in love with Yvonne Strahovsky who is gorgeous and does a spot on English accent.

A Good Day to Die Hard’s Jai Courtney plays another unlikable character, which seems to be all he plays but thankfully he doesn’t have a big role.

I was always a big fan of Mary Shelley’s Frankenstein and I liked how this essentially carries on after that story finishes, except that the Frankenstein creature survives.

The story is absolute bollocks and it’s all very silly but it was really what I was in the mood for and is an ideal escape for a few hours.

Yes there is CG overload as I stated but there are some great action scenes and the finale is pretty spectacular and thrilling too.

There is some unintentional humour though as it’s pretty difficult to take characters like ‘The Gargoyle Queen’ seriously and the demons are the least threatening demons you’ll ever see.

I liked the idea of “ascending” and “descending” though which is what happens to demons or gargoyles when they get killed. The gargoyles are essentially angels, doing God’s work on Earth. When they die, they turn into rays of light and ascend into heaven. The demons turn into flame and descend into Hell. I had to give props for that kind of imagination and the visuals used for them were pretty impressive.

I, Frankenstein had a pretty epic sounding score too, filled with Gothic choir which really helped to create a sense of scale.

Overall, you’ll have forgotten the movie after you’ve come out of the cinema but it’s a pleasing enough diversion with plenty of action and some nice visuals too. Go in with zero expectations and you just might find yourself transported away for a while.