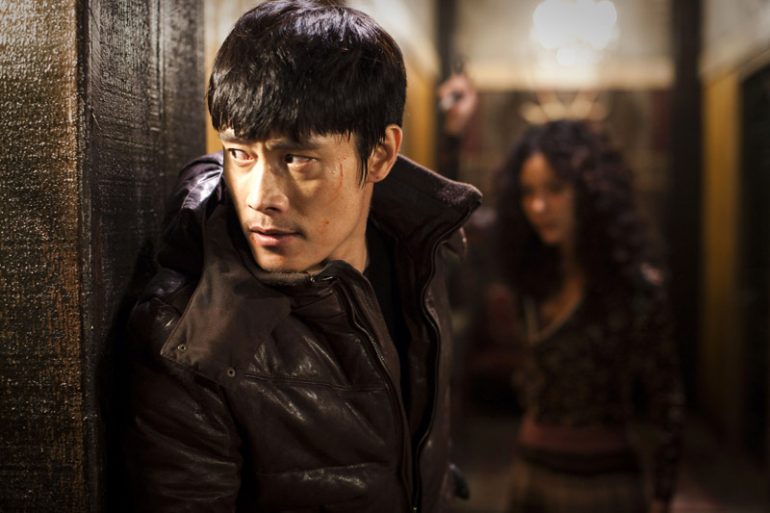 An incredibly challenging picture that demonstrates how revenge does’t bring peace but only more violence. It’s incredibly disturbing and I’m not sure I’d want to sit through it again but it’s definitely a movie worth watching at least once.

Plot: On a dark road, taxi driver Kyung-chul (Min-sik Choi) comes across a scared female motorist stranded in a broken-down vehicle. He pulls over — but not to help her. When the woman’s head is discovered in a local river, her devastated fiancé, Kim Soo-hyeon (Byung-hun Lee), a trained secret agent, becomes obsessed with hunting down her killer. Once he finds Kyung-chul, things get twisted. After brutally beating the murderer, Kim lets him go free, and a demented game of cat and mouse begins.

Review: I got a tirade of abuse on my personal Facebook page the other day when I stated that I hadn’t seen this movie before and was going to finally sit down and watch it on Netflix. I had a feeling it would pretty disturbing but that would be understating it quite a bit. This is arguably one of the most fucked up movies I’ve ever seen; it’s incredibly brutal in parts and is a really tough watch with some viscerally violent scenes. With a title like “I Saw the Devil” though I wasn’t expecting “You’ve Got Mail”.

From the opening few minutes it oozes with dread and impending threat and when we see the lone woman called Joo-yeon in a broken down car we know this is her last night on Earth. It’s a good thing kindly serial killer Jang Kyung-chul (Choi Min-sik) stops by to help and relieve her of her head.

Since having her head removed Joo-yeon’s car trouble has disappeared however, her fiancé Soo-hyun (Byung-hun Lee) is none to pleased as he was quite fond of her head. So he vows revenge on the man who did this and begins to hunt down local serial killers and torture them. When he eventually finds Jang Kyung-chul his game really begins as he catches him, tortures him a little bit and then lets him go as he wants him to suffer as much as she did.

As you can imagine this movie isn’t an easy watch but it isn’t meant to be; it doesn’t make the violence look fun or sexy; it looks horrible and shows the consequences of it on the perpetrators and the victim’s families.

As the story goes on we notice that Soo-hyun is slowly becoming more of a monster but you never feel that he is enjoying it the way Jang Kyung-chul does. Soo-hyun is filled with grief and feels this is the only way to get justice for his lost love whereas Jang Kyung-chul is just a psychopath who loves to hurt and kill people, especially women.

In terms of action there are a few fight scenes but to be honest this is more about the kills and the consequences of the violence so if you’re looking for something like a Hollywood action thriller then this maybe isn’t for you.

I did think it was odd how Soo-hyun never seemed to get arrested for what he was doing though and he seemed to get free reign to just drive after people and torture them because they had done bad things.

There is the whole moral question to the story; even though the word is never mentioned but Soo-hyun is basically a vigilante trying to get justice his way so you’re left wondering if it was all worth it especially by the end when we see how much he has lost. I didn’t really care about him as a character either as we never really find out much about him but I guess that was the point.

The performances are superb though and Choi Min-sik gives a barnstorming performance as the psychotic killer; he is always quietly calm which makes him more terrifying and it’s almost like he isn’t even acting at times.

The cinematography is perfect and the score is subtle and barely noticeable at times so when the kills are happening there’s nothing to distract from how horrific they are.

Overall, I Saw the Devil is an incredibly challenging picture that demonstrates how revenge does’t bring peace but only more violence. The violence is disturbing and I’m not sure I’d want to sit through it again but it’s definitely a movie worth watching at least once.