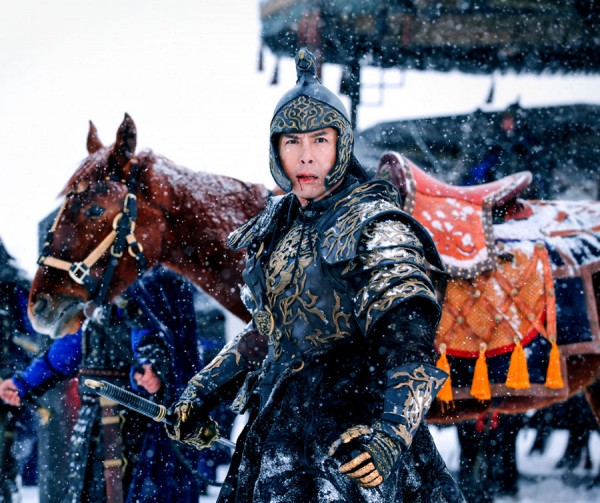 Iceman isn’t one of Donnie Yen’s finest hours and despite some interesting moments and an entertaining music score, it ultimately falls flat and is a bit of a missed opportunity.

Plot: An imperial guard and his three traitorous childhood friends ordered to hunt him down get accidentally buried and kept frozen in time. 400 years later passes and they are defrosted continuing the battle they left behind.

Review: Donnie Yen is pretty much my favourite action star these days and I have to admit I’ve only really seen the majority of his movies over the past few years. He has fantastic screen presence and his ability to kick ass and make it look easy is pretty much without equal.

Recently however, he has made the odd duff choice and sadly Iceman is one of them. It’s not a terrible film but it’s let down by an uneven tone and an overuse of poor CGI. Yen is a human special effect and doesn’t need technical “wizardry” to make him look good, but as this is more fantastical than say Special I.D. I can let it slide.

Now on to the tone of the film; one minute it is a farcical comedy with slapstick humour, including people breaking wind and other classy jokes. The next minute we have a serious scene with a character dying and the daughter grieving. It doesn’t help that a lot of the acting from the supporting cast is pretty bad too, especially during the English speaking scenes.

Simon Yam is on fine bad guy form although he doesn’t really have much to do, but it looks like his role will be expanded in the upcoming second movie. I’m not sure the story is interesting enough to warrant sitting for another 2 hours of lame fart jokes, but it depends if there is a bit more ass-kicking action.

The best scene in this movie is the nightclub fight between Yen and Baoqiang Wang who plays Sao; it reminded a little of the climactic fight in SPL… just not as good or hardcore.

I really liked the music score which was rather Inception-esque (isn’t everything these days?) but it really works well and gives a bigger sense of scale to the action.

The highlight of the movie for me was a subject which is only touched on and I wish it would have been a bigger focus for the story. That is when Yen and even the villains experience modern times, they notice how sleazy it is and that the honourable way of the martial arts has long since been forgotten. It is handled in a comedic fashion but with a more serious tone, it could have had something deeper to say about modern society.

The death of certain character’s families are only touch upon and what could have had a more tragic tone was lost.

Nothing is really wrapped up in this film and it is left very much open for Part 2 which will be out in a few months. The climactic fight on the bridge is quite cool, but is once again sadly let down by rotten CGI. I’ve also never been a fan of wirework fight scenes and prefer them to be more “real”.

Overall, Iceman isn’t one of Donnie Yen’s finest hours and despite some interesting moments and an entertaining music score, it ultimately falls flat and is a bit of a missed opportunity.