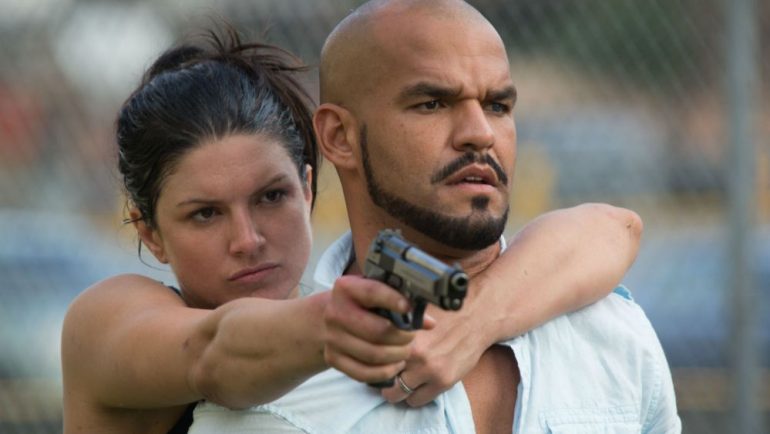 In the Blood really showcases Gina Carano’s action hero credentials and if you’re looking for a movie with some twists and turns, engaging story and plenty of broken bones then you’ll have a blast.

Plot: When her husband goes missing during their Caribbean vacation, a woman sets off on her own to take down the men she thinks are responsible.

Review: Gina Carano, Danny Trejo and Cam Gigandet star in this no holds barred action flick with Carano proving she is one of the greatest female action stars of all time.
In case you’re wondering, yes this is better than Haywire (which I also enjoyed) but this is a more old-school actioner. Carano is an unstoppable fighting machine with killer moves and she shows no mercy.

It has an awesome fight in a nightclub with Carano taking on all comers and even beating the Hell out of other women. Considering the rather modest budget, the action is excellent with Gina doing the majority (if not all) of her own stunts. I’m pretty sure that is genuinely her doing the rail slide, which would be incredibly nerve-wracking.

In the Blood also shows of Gina’s acting chops and I have to say I was impressed the scenes where she is desperately searching through the hospitals for her husband is very believable and she genuinely seems like she is in distress.

Story wise it’s Taken meets Turistas so as you can imagine it’s quite intense although not quite as tense as Taken. There are plenty of twists and turns so it’s not just action for the sake of it; everything happens for a reason and there are a few surprises I didn’t see coming.

The always reliable Stephan Lang plays Gina’s father in it and he’s as intimidating as ever; he brings her up in a tough world and we show him training her to become the ass-kicking warrior she has now become.

Danny Trejo only has a small role but I liked the direction his character went which was another nice piece of writing.

Overall, In the Blood really showcases Gina Carano’s action hero credentials and if you’re looking for a movie with some twists and turns, engaging story and plenty of broken bones then you’ll have a blast.