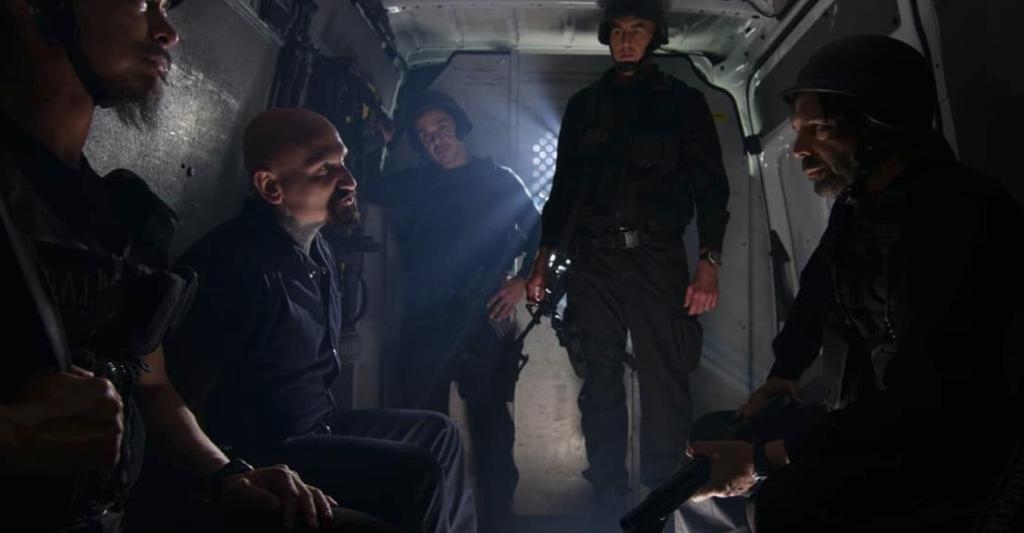 Plot: Throughout history there have been cases of entire cities disappearing overnight, but no one really knows why. It’s happened throughout the world, as recently as one-hundred years ago in the United States, and it’s also going to happen tonight. LOS ANGELES: a SWAT team transporting a high profile inmate find themselves trapped inside a county detention center as the world burns around them. They have no communication with the outside world, no radios, no television, and no working vehicles. Together they must put aside their differences and band together to escape the mysterious alien forces that are tracking them.

I’ve always loved alien invasion movies especially R-rated ones so we can go to town with some good old-fashioned violence. Attack of the Unknown is one of those movies and comes from director Brandon Slagle (Crossbreed); despite being a lower budget independent feature it as an impressive visual style with a mixture of practical effects and CG.

Our lead Vernon is played by Richard Grieco who comes across in a very Mickey Rourke fashion in this movie in terms of performance and I mean that as a compliment. He’s world weary and grizzled but when he not only gets some bad personal news, he also has to deal with an alien invasion making things go from bad to worse… pretty much sums up 2020.

The supporting cast includes the always menacing Robert LaSardo who plays gangster Miguel ‘Hades’ Aguirre who Vernon and his unit have captured and are trying to keep in prison despite the world essentially ending outside. William ‘Bill’ Connor also gets a small role as Papa Charm who is also effectively scary. My favourite character was Tadamesa Takayama (Kyosuke Mukai) who just had a cool look about him and had great screen presence.

Slagle is clearly a fan of the action genre as the film has a Michael Bay sheen to it so it never looks low budget; there is also a nice nod to Face/Off when a young boy puts on headphones and listens to music while a shoot-out happens around him.

There are some awesome shots of the city as it burns after the alien attack and there is plenty of action mostly involving shoot-outs and fights with aliens. The aliens themselves are done practically and although they don’t move that much they still look cool and a scarier version of the classic alien grey we’re used to.

It’s very much open for a sequel which I would gladly welcome as there are some fun directions to take future stories so it will be interesting to see what happens.

In terms of flaws it probably didn’t need the nearly pornographic sex scene at the beginning as it didn’t add anything to the story; it made for awkward viewing in the Convent I visited at the weekend.

Overall, Attack of the Unknown is a massively entertaining alien invasion tale with impressive visuals and an ambitious scale so if you enjoy your indie action then check it out when it’s released soon.