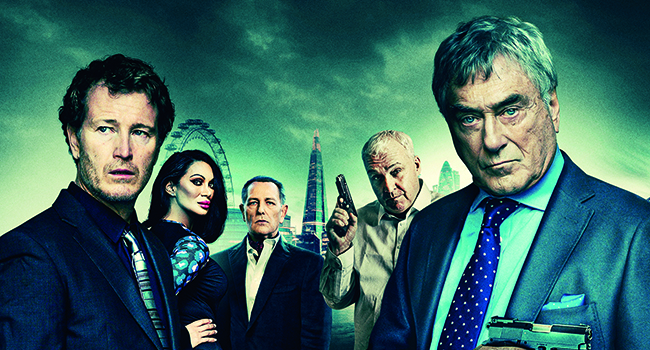 Plot: When underworld kingpin John Morgan (Billy Murray) returns to London with his wife Sadie (Jeanine Nerissa Sothcott) from their perfect life abroad, a feud is reignited with vengeful cop Frank Conway (Nick Moran) who is obsessed with bringing him down. Meanwhile, pressure from big boss Damien Osbourne (Bruce Payne) only adds unnecessary heat to the rising tension within the family business, with Morgan’s brother Richard (Frank Harper) and nephew Eddie (Danny Bear) constantly at each other’s throats. John aims to bring the Morgan gang together at a party in his plush apartment where they are set to meet his daughter Kate’s (Ambra Moore) new girlfriend Zoe (Lucy Aarden) – but all is not what it seems and as the night progresses a deadly game of cat and mouse ensues ending in revenge and murder, as the family are trapped in their own home by a gang of heavily armed intruders.

Nemesis is more of a crime thriller than an action picture, but it has enough violence to be covered here.

From producer Jonathan Sothcott and his new company Shogun Films comes Nemesis, a Brit gangster flick with a narrative that refuses to be conventional or predictable providing us with some twists and turns we don’t see coming.

Billy Murray is as magnetic as ever as career gangster John Morgan who may have more skeletons in his closet than even his family know about; he is a survivor who will stop at nothing to protect his wife and daughter when home invaders show up and he is every bit as ruthless. It’s funny how by the end of the movie you aren’t sure who you should be rooting for so it keeps you guessing.

Jeanine Nerissa Sothcott plays Sadie Morgan, John’s wife who is loyal to him no matter what which may or may not be her undoing.

I’ve been a fan of Bruce Payne since I first saw him in Passenger 57 back in the day and he has a nice cameo as crime boss Damien Osbourne.

Frank Conway (Nick Moran who manages to menacing and slightly pathetic all at once) is a fascinating character who has been trying to take down John for years (for personal reasons) but his inner demons and struggle alcoholism has made him lose his edge and his job as a cop.

Lucy Aarden nearly stole the show as Zoe, but I won’t say more than that as I don’t want to spoil anything.

Ambra Moore (Sir Roger Moore’ granddaughter in her first acting role) plays John’s daughter Kate Morgan and goes through quite the ordeal with her family.

This is low budget fare so don’t expect lots of set-pieces; the first half is mostly dialogue driven establishing the characters ad their motivations, but it ratchets up the tension giving us a satisfying and bloody finale.

Overall, Nemesis may not be packed with action, but the story manages to keep you on your toes (especially the final half hour) and Billy Murray and his co-stars are well cast in their respective roles giving us an intense ride that sticks with you after watching.