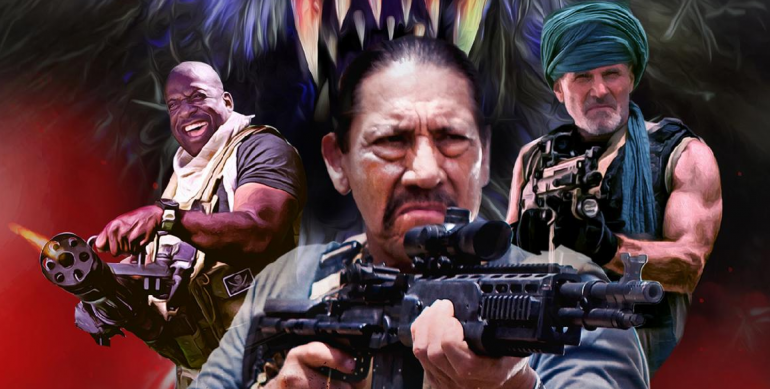 Plot: In the Afghanistan desert, a group of mercenaries out for treasure complete their greatest heist. Seeking refuge from the hunting Taliban in a nearby cave, they are soon joined by retreating US soldiers, and both groups are trapped within by a rocket explosion at the cave’s entrance. The newly joined parties need to work together to find an escape through the labyrinth but soon realize they’re being tracked by a deadly beast that local legend calls Karnoctus; and they have become… the prey.

The Prey: Legend of Karnoctus may be bit of a mouthful as a film title but this is still a lot of fun; I had no expectations going in but the cast alone made me curious as it includes Nick Chinlund (Chronicles of Riddick, Con Air), Adrian Paul (“Highlander: The Series”), Kevin Grevioux (Underworld), Fahim Fazli (Argo, Iron Man), Adolfo de la Parra, Justin Arnold, Masika Kalisha, and Danny Trejo (Machete, From Dusk till Dawn).

Using mostly practical effects the creature itself looks awesome and you can tell this is a passion project for the directors (Cire Hensman and Matthew Hensman) who give some nice touches of humour as well as cool animated segments to go along with the gruesome kills. I enjoyed the banter between the soldiers discussing everything from G.I. Joe to Star Wars and if the movie had just been that I would have been quite happy.

The Prey moves at a decent pace too so it’s never dull although it could have done with a bit more action; it’s very much open for a sequel which I would check out.

I wish Adrian Paul and Danny Trejo had bigger roles as they are really just extended cameos; Kevin Grevioux needs to narrate my life as he has the most awesome voice; I remember him being a highlight of the Underworld movies and couldn’t believe someone’s voice could be that amazing.

Overall, The Prey: Legend of Karnoctus was far better than expected with some nice touches of humour, an impressive cast and decent kills making it a fun ride.