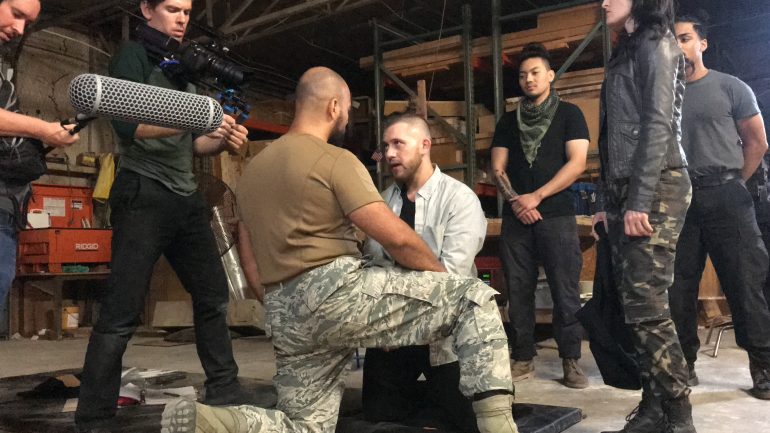 Agent Eoghan Flynn must recruit Johnny Mai in order to take down an international terrorist on the brink of gaining nuclear power. Eoghan faces the challenge of winning over Johnny and taking down the terrorist Matthias Frost, while Johnny must face off against his past in the process.

DEAD HAND is a non stop action thrill ride with humor speckled throughout. The action focuses on hand-to-hand combat and acrobatic stunts. All actors performed all of their own fight scenes and stunts. The film explores themes of redemption as Johnny tries to make amends for his past, the value of perseverance as Eoghan nevers ceases chasing victory, and what values make a true martial artist portrayed in a battle of ideologies.

After six months of planning, production began on November 5th, 2020. Due to a limited out-of-pocket budget of $5,000 it took 35 days of shooting over the course of an additional 6 months, with principal photography wrapping on June 5th, 2021. COVID precautions, day jobs, and inclement weather forcing one of the lead actors to relocate, contributed to the prolonged production period. However, despite it all, the crew saw the production through to the end.

Now, the team seeks $20,000 through their Indiegogo campaign in order to pay for post-production costs which include visual effects, color correction, sound mixing, an original score, and more.

John Francis McCullagh has nearly a decade of experience in the film industry. He is a professional actor represented by the Linda McAlister talent agency, worked as a fulltime video editor and content producer for Rooster Teeth LLC., and worked on the sets of the Dallas commercial scene. John Francis has also directed and starred in multiple award-winning action short films. He aims to shake up the action film genre with great characters and beautifully shot martial arts action.

The Indiegogo will run from August 2nd until September 11th, 2021. Contributors will receive exclusive perks, including an illustrated poster, actual props from the film, and even two tickets to the cast and crew premiere and after party.