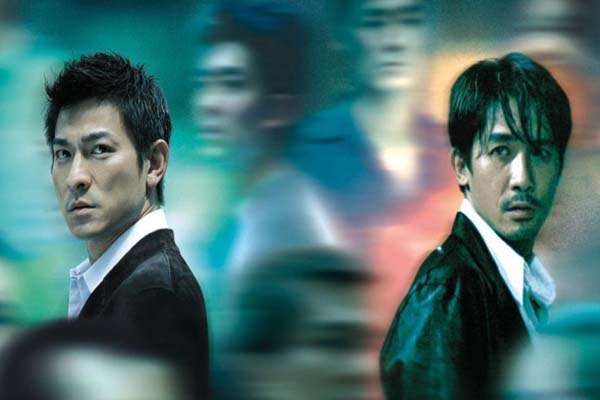 Infernal Affairs is hugely entertaining with a tense story and well developed characters. It’s also stylish and well-paced; no wonder it was destined to become a classic.

Plot: A story between a mole in the police department and an undercover cop. Their objectives are the same: to find out who is the mole, and who is the cop.

Review: *SPOILERS AHEAD* It’s no wonder Martin Scorsese wanted to direct the remake of this film (The Departed) as it really is a masterpiece. It’s slick, stylish and tense with characters that you genuinely care about.

I absolutely loved The Departed but I think I have to say that I prefer this film as Tony Leung and Andy Lau are far more likeable on-screen than Leo DiCaprio and Matt Damon.

Damon’s character Colin Sullivan was an absolutely hateful scumbag but Lau’s version (Inspector Lau Kin Ming) is more sympathetic and he genuinely wants redemption at the end. Where the Departed has Damon being shot by Mark Wahlberg, this movie has Lau’s Inspector getting away with it and getting on with his life.

Infernal Affairs is almost identical in terms of story though to The Departed with several scenes instantly recognisable; what’s interesting is that it’s also considerably shorter and tells the same story. I cared more about Tony Leung’s character Yan more than I did for Leo’s turn as Billy.

I think Jack Nicholson was more threatening than Eric Tsang as the crimelord though; when he’s on-screen you’re waiting for something nasty to happen and there’s an air of constant threat.

There actually isn’t much in the way of action; a couple of shoot-outs but it is so tense and involving that you’ll be glued from beginning to end.

I loved the music score to this movie as it really has an epic feel to it with full orchestra and even some choral pieces. There is an air of tragedy and by the end you are feeling genuinely sad that Yan couldn’t get his normal life back.

Overall, Infernal Affairs is hugely entertaining with a tense story and well developed characters. It’s also stylish and well-paced; no wonder it was destined to become a classic.