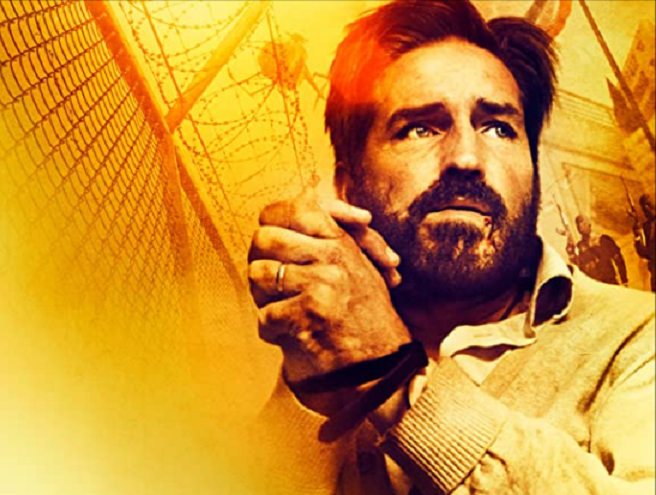 Infidel isn’t exactly a fun time at the movies but Jim Caviezel never disappoints and there are some impressive action scenes especially in the final half hour. It’s not easy viewing but it’s certainly worth watching at least once.

Plot: An American man (Jim Caviezel) is kidnapped and thrown in prison in Iran on spying charges. His wife begins a desperate chase to save him, making his freedom her mission.

Review: Just from the trailers you could see Infidel was going to be an intense ride and that’s exactly what it was. It’s probably not the kind of film you would want to watch regularly but it’s slickly made with strong performances by the entire cast.

Jim Caviezel seems to be attracted to challenging subject matters for his films and Infidel is no different; what’s interesting is that his character Doug Rawlins isn’t especially sympathetic and if he had just kept his mouth shut, he would have avoided a lot of trouble. He is invited to speak on television in the Middle East and decides it’s a good idea to preach Christianity to a country filled with Muslims so it’s not surprising what happens to him.

He even says at point that his ego took over in the moment but on the other hand his power to resist his captors is admirable and he stands up to them constantly.

After losing a child in a car accident his wife Liz (Claudia Karvan) loses her faith and this causes a bit of a rift between the pair in terms of their beliefs but when Doug is taken and the US government doesn’t bother to help she takes it upon herself to bring him home no matter what.

As I said this is packed with tension and isn’t exactly a tourism commercial for Iran but it asks difficult questions about faith and Doug’s is teed to it’s limit.

“But Eoin, this is an action site, we don’t care about this sort of stuff”, I hear you say. Well it is more of an action thriller than an all-out action movie but there is still enough action including explosions, shoot-outs to keep genre fans entertained. It’s gritty, realistic action here so it’s not exactly “fun” but the final 30 minutes should have you on the edge of your seat.

Hal Ozsan gives a scene stealing turn as the hateful Ramzi who kidnaps Doug but he isn’t just portrayed as a monster and I like the scene at the end between him and Doug.

Natalie Holt provides the score which adds to the set-pieces and also sounds suitably Middle Eastern.

Overall, Infidel makes for uncomfortable viewing with an interesting protagonist in Jim Caviezel who isn’t entirely sympathetic but still keeps us engaged. It’s packed with tension and the finale is suitably satisfying and action-packed making this a rental at least.