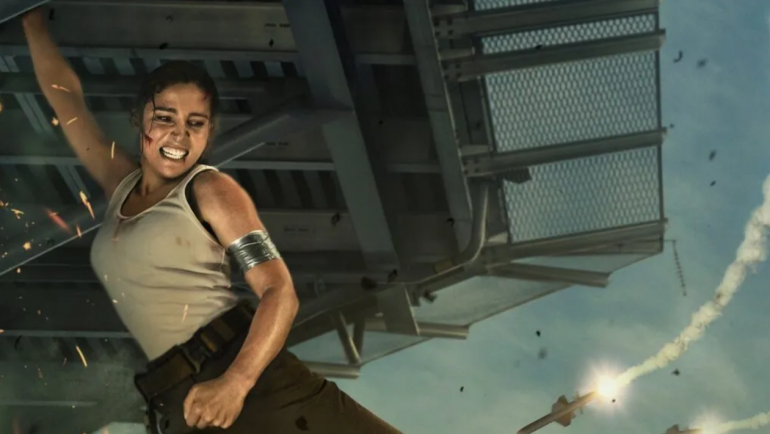 Interceptor offers nothing new to the Die Hard clone genre with some ropey performances and hilarious dialogue however, for the undemanding viewer there are enough bad guy deaths and fight scenes to be worth watching once… maybe.

Plot: One Army captain is forced use her years of tactical training and military expertise when a simultaneous coordinated attack threatens the remote missile interceptor station of which she is in command.

Review: I’m not sure if Interceptor is meant to feel like a love letter or a parody of old-school 90’s action movies like Under Siege as at several points I thought the cast were going to burst out laughing delivering some of that dialogue. Elsa Pataky stars as our unstoppable hero Captain J.J. Collins, a soldier who is sent to an outpost at sea which is used to monitor and prevent nuclear missiles from being launched.

If you think your first day of your job was bad then spare a moment to think of poor J.J. who has to contend with a group of terrorists who want to blow up America and she is the only one who can stop them.

Our main villain Alexander Kessel (Luke Bracey) is no Hans Gruber but he still prefers to use charm to try and win over J.J. to his way of thinking even taking her side as we find out why she has been ostracized from the Army. The script is filled with some awful lines (like many action movies) and Pataky tries her best to seem tough although it stretches credibility watching her fight off guys twice her size. It manages to pack in every cliché imaginable lacking any surprises but that’s why it makes for a fun (if rather bland) watch.

I was initially going to give this 2.5 out of 5 however, there is a kill towards the end which elevated it; yes I’m a reviewer who rewards a movie for how awesome the bad guy deaths are and Interceptor has some rather awesome ones. I won’t spoil it but once you see the movie you’ll know exactly what I’m talking about.

It’s tightly paced wasting no time in getting going and we get regular fight scenes; keeping the action contained on the rig gives a mild sense of claustrophobia but that was something that wasn’t really expanded on and could have made for a more intense viewing experience.

The music score doesn’t really stand out aside from near the end when they seem to be channeling James Horner as it’s reminiscent of Aliens which is definitely a high point.

Overall, Interceptor is entertaining perhaps for all the wrong reasons as there is some cringe inducing dialogue and some of the acting isn’t the greatest but if you’re looking for an undemanding 98 minute programmer then you could do worse… or just watch Under Siege again as this just feels like a lower budget reboot.