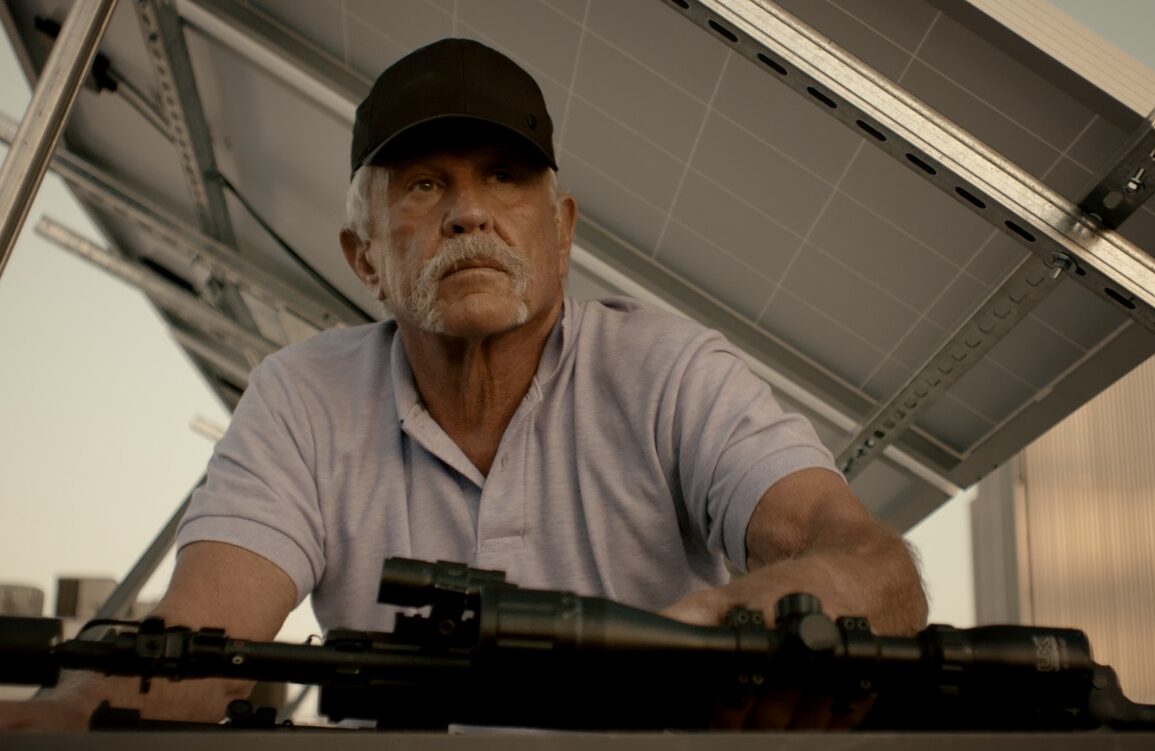 A few days ago I spoke with Jeff Fahey about his new movie Black Warrant and today I got to speak with Tom Berenger about his role in the film. He plays semi-retired special ops assassin Nick who crosses paths with a DEA agent on separate missions to stop a cyber terrorist organization that has built a dangerous machine threatening to attack the power grid and bring catastrophe to the world.

Thank you very much for taking the time to chat with me today; I really appreciate it.

Well, thank you, sir. Is it snowing up there in Toronto?

It was, but it’s now stopped, thankfully. So, it’s just raining there.

Raining. Wow. On top of the snow. That’s gonna be fun.

Yeah, I’m not going outside this weekend. So, today we’re going to be talking about your latest film Black Warrant, where you play Nick Falcone. For those who don’t know, can you tell us a little bit about him? What appealed about the character to you?

Well, of course, there’s the whole Sniper thing there. I know how to do that so, I thought, well, okay, but I don’t want it to be like the Sniper character that I played and all those other parts, the Marine master gunnery sergeant. I didn’t think of Nick as being military per se, but I just think of him as being something like State Department, Intelligence, CIA, that kind of thing. I know a former CIA operative who that reminds me of, but I can neither confirm nor deny anything he told me because that’s sort of the secret (laughs).

One thing I love about Nick is his look. I love the moustache; how did you go about creating the look for him?

I was in Sturgis, and I just decided I would go full-on Fu Manchu and then I saw Fahey. I think he had a little facial thing going on there, too. We both did. It was interesting because we’d worked together before, but here we are now. We were both a little bearded, and it was fun to work together again. He’s playing like my handler; I guess you could call it for lack of another word, my boss.

I was talking to Jeff the other day, and I was saying we’ve just scratched the surface of these characters, particularly with you and Jeff. There’s that natural chemistry where we could tell you guys were friends in real life; that just jumped off the screen. Would you be interested in doing a potential follow up with Jeff having a bigger role?

Oh yeah! he’s something else. Boy, he is like one of the more interesting people I’ve met. It’s just… what a life. What a strange life. He’s always travelling to places like Afghanistan. He’s here, he’s there; it’s like wow! Sometimes he says “oh, well I’ll come and see you tomorrow in Italy”. I thought he meant it but it didn’t happen but it could have with him, you never know. He’s just always travelling somewhere, and he travels with just a tiny little suitcase. I don’t know how he does it.

He does all this incredible stuff for charity as well. You’re right, he’s had an absolutely amazing life.

I know. He told me about that. Yeah, it was the kids, the orphans. Then, of course, when the whole thing in Afghanistan happened, I thought he’d be kind of really depressed or moody, but somehow, I don’t know, he just sort of overcame it. It was positive. I think they might have gotten some of those kids out of there, too. I don’t know how exactly, because he would never really tell me that, but yeah, it’s interesting. He’s a shadowy character on the edge of show business (laughs).

How did you find working with the director Tibor Takács?

Yeah, I like him. I said to him, “are you actually Hungarian? And he said “yeah!” “Because you don’t have an accent like that kind of middle European accent”. He says, “I came over here when I was a kid and I learned to write in English” and I said “oh I see what you mean”.

I said “do you speak it? He goes “Yeah”. I said, “that’s a hard language”. I mean he says “nobody learns it except Hungarians. We’re surrounded by Germans and Slavs.” The Slavs can all understand each other to a degree – the Polish and the Serbians and the Russians and Ukrainians. But yeah, he’s a real good director. I don’t think it’s easy to direct, just the editing alone. You have to do that editing in your head as well while you’re going along.

Obviously, you’ve been doing action roles for years especially the Sniper movies so you probably didn’t need it, but did you have to do any specific training for using the firearms or anything in this film?

No, no. It’s just the same old stuff that I’d learned. Different rifle, pretty much the same technique and all that.

Yeah, I was just thinking I can’t believe the Sniper movies are nearly 30 years old; how did that happen?

Oh man, I know, right? I heard they still did one without me, but that’s okay. That’s bound to happen eventually.

Did you spend time with Cam Gigandet outside of the film to help create the relationship dynamic?

I didn’t have a lot of time for that. We met down in Mexico there in Tijuana, but I really liked working with him. He’s a very, very talented kid. I mean, he has a good career ahead of him. He’s just got a good persona for the screen and he’s very talented, just watching his choices and I’ve been studying him a bit. I like Rodrigo Abed too. I think he’s Puerto Rican but he’s from New York. He was playing Capitan Escalante and I said, “this is a really good part”. He said “Yeah, it is”. It was a nice, nice character for him. 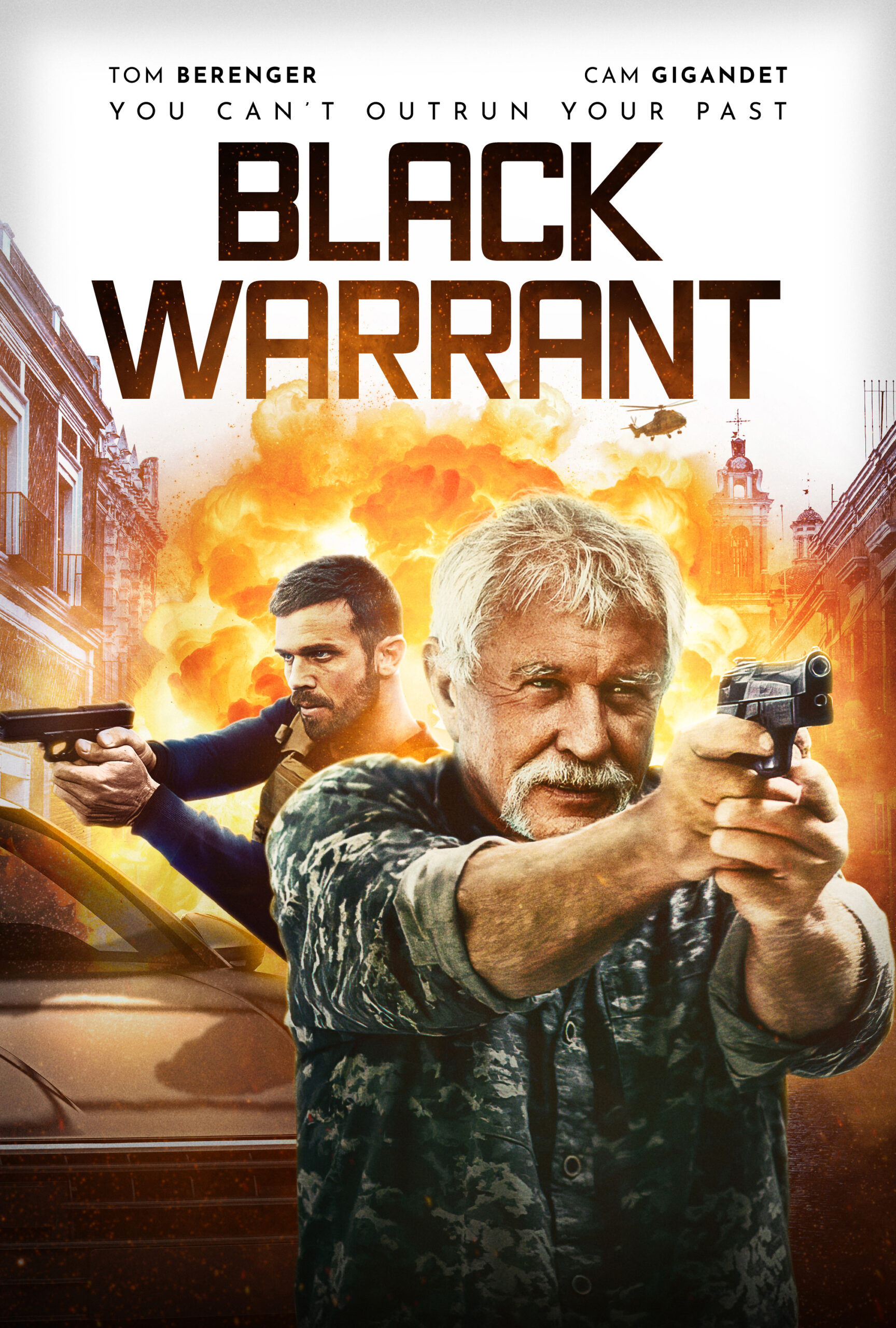 I love the whole Father-Son dynamic. I thought the characters were especially interesting in this movie, usually in an action movie, the focus is mostly on action and explosions but this one was still about characters.

Yeah, I liked that that part in those scenes with him; we’d go through that because it is character stuff, you’re right. But also it takes you out of the plot a little bit which in action films is everything but it’s nice when something like that changes in a film and keeps it from going on one level too much. As an actor I love those kinds of scenes.

What would you like audiences to take away from Black Warrant?

I think probably that it’s just good entertainment; I’m not sure that there’s a huge theme behind all this, but the trick is to just have a good time with it.

Thank you so much for taking the time out to chat with me today and all the best with the movie.

All right. Thanks to you, Eoin and stay warm up there in Canada.

BLACK WARRANT is available now on digital and on demand.