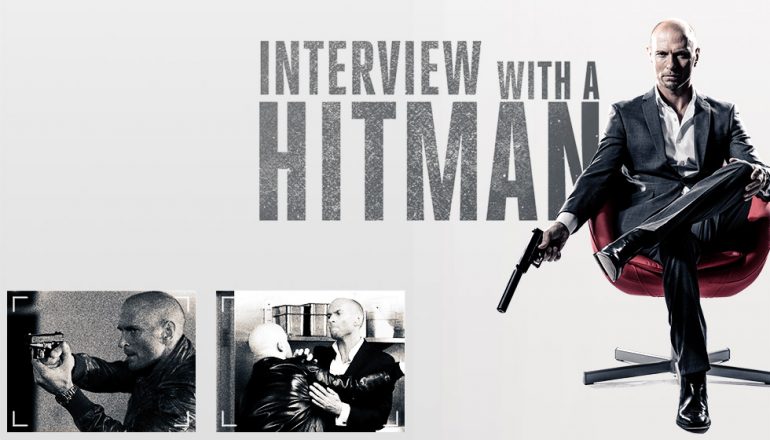 Interview With A Hitman (2012) Review

Interview With A Hitman is s a daring and somtimes shocking journey into the world of a hired assassin; well worth checking out if you like low key, down and dirty hitman movies.

Plot: An elite hitman returns to erase his past only to find that somebody has messed with his future.

Review: Luke Goss stars in this harrowing but gripping portrait of an assassin telling his life story. It starts off a bit slow burn, establishing characters and atmosphere and that may put a few people off.

It doesn’t flinch away from violence either and it all feels very believable. This is very much an adult oriented action thriller and Luke Goss gives a career best performance as the “Stone Cold Killer” Victor; a man who is very good at what he does. He doesn’t seem to care about anyone or anything and will kill without question or remorse.

I think I’d have to agree with a lot of his fans who say he would make a great Bond; he’s got the ruthless killer bit down pat, the accent and the ladies love him so if not Statham then why not him?

It’s one of the few movies which I can say feels original; sure there are plenty of movies about hitmen, but the way this is executed (pardon the pun) really makes it stand out.

The fight scenes don’t try to be anything flashy, but more realistic, without any shaky cam to ruin it. There is a particular fight in a kitchen which is brutal but enthralling and is arguably the action highlight of the movie.

It has a limited budget but even with a larger budget I don’t see how that would make it better. The story is well told and has some nice twists and turns; I didn’t see the ending coming, which was a shock.

One of my favourite aspects of the film was the music which is mostly electronic and works nicely in creating a pervasive feeling of dread and impending violence.

Overall, Interview With A Hitman is s a daring and somtimes shocking journey into the world of a hired assassin; well worth checking out if you like low key, down and dirty hitman movies.