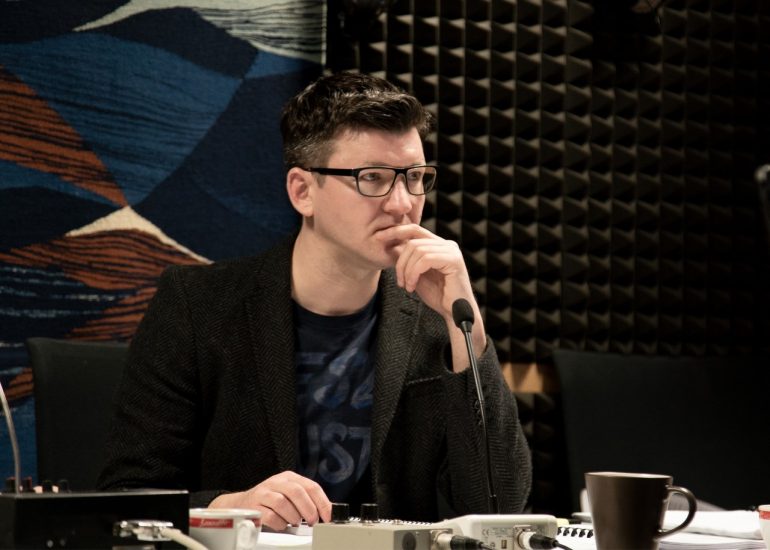 Composer Benji Merrison has worked on various projects where he has provided the music to shows like Britannia, Victoria, Tin Star, Horizon and many more however, his most recent music score is for the new action movie SAS: Red Notice starring Ruby Rose, Andy Serkis and Sam Heughan. Benji stopped by to chat with us about creating an exciting score for SAS: Red Notice.

Hi Benji, thanks for taking the time to chat with us.

You’re welcome Eoin, thanks for having me along.

Today we’re talking about your score for the new Sky action film SAS: Red Notice; although you did some work on Britannia this was your first foray into full on action cinema I believe; can you talk about creating the sound for it?

Absolutely! When first exploring the musical language of SAS: Red Notice, it became clear that there needed to be very clear thematic statements, not only for the main characters, but also to underscore developing plotlines and twists.

One of the most fascinating thematic challenges was how to represent the idea of psychopathy, a character trait of some of the main characters in the movie. In the end, I settled on the idea that the themes themselves should be very simple and precise, and the musical ‘psychopathy’ was going to be in the form of distorting, bending, and subverting those simple ideas.

Many of the themes and musical ideas for SAS: Red Notice came from improvisations I did live in the studio with the film’s producer, Laurence Malkin and the music editor, Peter Clark. This was a really interesting and organic process. Our hero is every bit as unpredictable as the villain… how would you describe the music choice for each character?

That’s right.  Even though on the face of it, the movie may seem like a hero vs. villain story, the truth is that it is more nuanced than that. Without giving away spoilers, we eventually realise that everyone is really just ‘doing their job’. To aid and subtly signpost this, I chose to score the Black Swans with a sense of pathos and sadness, rather than just the simplistic ‘dah dah dah, bad guys’ approach. This leaves the viewer with questions, from the outset, as to who is right and who is wrong.

Generally, what is your process and has it changed during the pandemic? What do you usually start with when composing?

My process will change quite a bit, depending on the score. I like to disrupt my process regularly, to avoid getting ‘stuck in a rut’ musically. In that sense, things have been normal during the pandemic, as my process has continued to change and evolve.

I feel like I’m quite visual when approaching scoring. When working to picture, I’ll start by watching the scene over and over with no other sound. I find that often the track writes itself in my head, and then I just transcribe this. I also think of it texturally, and try and find the analogues between the visual and musical textures of a scene, alongside the more obvious nudging of emotional intent to the audience.

You mentioned on Twitter recently that the scene with Sam fighting one of the terrorists was one of your favourites to score; why was that?

Ha! Yes, this is the first time that Sam makes contact with the Black Swans, after they have hijacked the Eurostream train. It’s the first time we hear this version of the Black Swans theme, which then reprises throughout. The fun of it really was that I could ‘let rip’ with the theme, and certainly in the recording sessions at AIR studios, the amazing Brass players blew the roof off!

Were there any scores that impacted you growing up?

A lot! As a kid (and still nowadays) I didn’t really like any music with lyrics in it.  I pretty much hoovered up any music as long as it fitted this criteria. Through this oddity, I discovered soundtrack music and was hooked.

I also used to listen to a lot of classical/romantic and early 20th century orchestral music, and imagine the story or film that it would go with. One of my favourite pieces was ‘Rite of Spring’ by Stravinsky, which I discovered through watching Disney’s ‘Fantasia’ on VHS! I thought it was magical and transported me to another place.  I also used to love ‘La Mer’ and ‘Daphnis and Chloe’ for the same reason that, to me, they suggested almost a film-like narrative.  I had a lot of fun making stories up in my head for these pieces. As a child I played and listened to a lot of music from the classical tradition. I loved Ravel, Rachmaninoff, Scriabin, Rautavaara, Chopin, Debussy, Ravel, Beethoven… anything I could hoover up really.  I also loved electronic music, and ambient stuff… The Orb, Eno, Amorphous Androgynous / FSOL, Floyd, Fripp.  Late night John Peel sessions were amazing! Do you listen to music scores in general outside of movies?

Yes, quite a bit. There’s a lot of great work out there at the moment, some fantastic new composers coming onto the scene.  It’s great to hear people breaking out of more traditional sounding scores, and trying to inject their own personality into their scoring.

Do you feel the music in a movie should stand out or should it blend in to be part of the story?

An interesting question. There’s a longer answer to this, but I’ll keep it brief!

I’d say that in general the music should be more subliminal and ‘blend in’, acting like a puppet-master for the emotions of the viewer.  In this sense, it is a very powerful tool in film making, because you can use it to completely reframe the emotional response to a scene or storyline, without the audience being aware.  I also love the idea of ‘pre-empting’ emotions, or hinting at storyline developments yet to come, with themes or recurring motifs.  It can create a sense of ambiguous intrigue, which can totally hook an audience into the story.  Music is so powerful like this.

However, there are always some occasions when the music should take centre stage, and really drive the scene.  I like to keep these moments fairly infrequent though so that they enjoy the maximum emotional response when they do occur.  I never think it is useful to have the music begin to irritate the audience, as it can break the immersive spell of the move.

So, I guess my answer is – Mostly ‘blend in’ and support the story, and very occasionally stand out and show off.

How would you describe your compositional style?

I wouldn’t know how to describe it really. I really enjoy working across a variety of compositional styles and techniques. I always have.

I often think that the desire to pigeonhole a composer with a particular style comes more from a marketing/industry perspective.  I guess there’s a simplicity and clarity to knowing that a particular composer has ‘this’ or ‘that’ style, but quite honestly I think I would get bored doing very similar scores each time.

I see each film or series as having its own unique personality, and part of the fun of scoring for me is to translate that personality into a unique musical language. I feel very fortunate to have some great projects coming up over the next year.  I have just completed a feature on the Beatles and their time in India.   I’m also working on two new David Attenborough series for BBC One, which will be out later this year or early ‘22.  I’m really proud of how these new scores are shaping up, and I can’t wait to share them with everyone.

Thanks so much and all the best with your future projects.

Thank you for having me along Eoin, it was a pleasure chatting.

SAS: Red Notice will be available across theaters and drive-ins in the US and Canada starting April 16