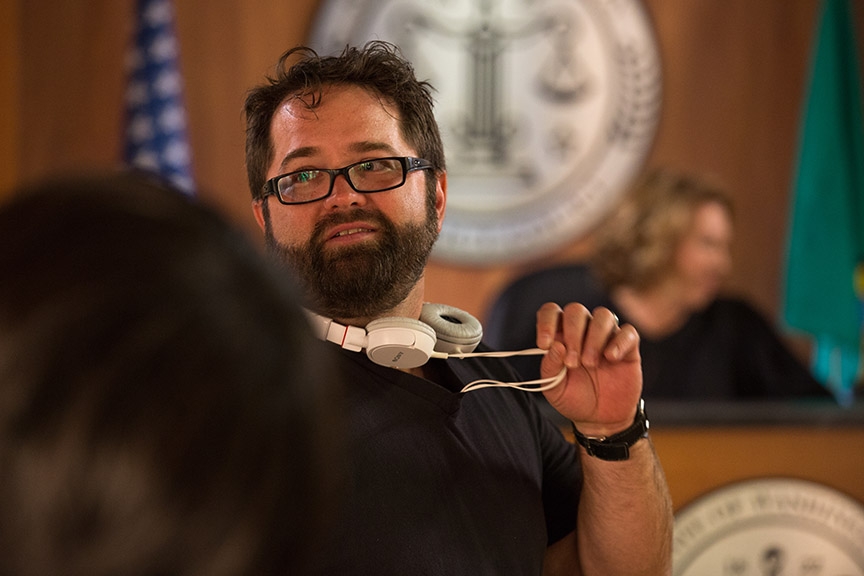 Interview with Director Brian Skiba on The 2nd

The 2nd is the new action film starring Ryan Phillippe and Casper Van Dien; it tells the story of  Secret Service Agent Vic Davies (Phillippe) who finds himself in the middle of a high stakes terrorist operation while trying to pick up his son and now must use his entire set of skills against the armed faction.

Director Brian Skiba stopped by yesterday to chat about the movie with us.

What drew you to the script for The 2nd?

The film had been developed before I came onboard; it came to me already with Ryan Phillippe already attached and I read the script. It was a fun piece and it’s a great opportunity for me as this is my “first full-fledged action movie”. I was very eager to do an action movie and I’ve been trying to get into that genre for the last 10 years as that’s kind of where I want to be. So, yeah, it opened the door for me and it felt good to walk through it.

What old school action movies particularly influenced you for this?

I mean, that was the whole thing. The reason I love action so much is because I grew up on action films with my dad. That’s all we would ever watch was Steven Seagal, Jean-Claude, Bruce Lee. We were watching everybody in the 90s and the 80s action, everything. I mean, that was that was his favourite movie genre. So I just grew up loving that genre and especially that time period. To have a film that came to me, that was that was kind of an homage to Die Hard I was like, OK, this is cool. I get not only into the genre, but I can do it with a feel and a flavour of classic 90s action and really give it all those practical effects and the explosions and everything that I loved about those films.

That’s actually one of things I was going to ask about was that I loved all the practical effects and the real explosions. Was it important to do everything as real as possible?

Yeah! When I brought my team I brought in three stunt coordinators and my fight choreographer. I mean, all these guys were all in the TV world and to be handed a feature, we are like, yeah, man but let’s do it right. So, I got the special effects guy up from American Horror Story. He was on hiatus. He’s a good friend of ours. So it was a bunch of TV guys (as that’s our day job) as we work in TV to be able to go and do an indie action movie. We just pulled together all our resources and the goal was to shoot every gun as real as we can, make every fireball as real as it can be and just everything practically. I didn’t want anything digital that didn’t have to be digital, you know, real squibs and everything. So yeah, that was absolutely our goal.

Good, because it’s funny, we action fans are hard to please and as soon as we see CGI explosions or blood we usually lose interest so I really think the fans are going to lap this one up.

Yeah, I know. Me too. I’m the same way. When Rambo (2008) came out and it was all CGI blood and squibs and all that. It was almost kind of a let down. It was like, oh man, I know that was the cool thing about the films in the 80s and 90s was the awesome stunt work and awesome special effects and it’s kind lost it lost its way with CGI and stuff. Definitely on these types of action films it has. And as an action film director with more coming, that’s my goal, is to kind of bring it back to where we’re seeing cool stunts again with great, great special effects.

I’m finding that audiences seem to be wanting that too. Recently with movies like John Wick, which has sort of reinvigorated the love for that old school action where people are there to see well choreographed fight scenes and real explosions. I really think that audiences are craving that.

Yeah. Absolutely. Absolutely. You know, I think John Wick is a great testament to that and I hope the same fan base clamours to this film because absolutely everything you see there we really did. The stunt guys really did and my actors did their fights. Most of the takes are really the actors doing it because they wanted to be a part of the of the action. 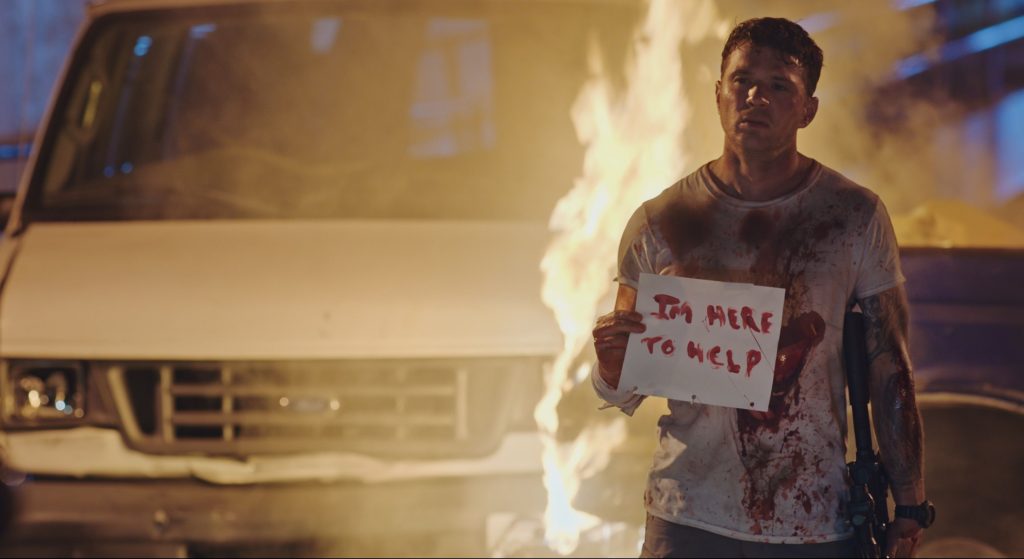 Ryan’s a black belt in taekwondo I believe so does that make it easier to create the fight scenes together and did he provide any input into them?

Ryan’s great. I had great stunt coordinators and had a great fight coordinator; Christopher Choy and these guys, we had two weeks to do our fight before we started shooting. So the first couple of days it was me and the stunt coordinators and the fight coordinator and I’ve also got a background in martial arts. So we all just went in and had fun. I mean, it was literally on two, three days of just fighting and rolling around. Mine is more Jujitsu so I definitely wanted to get a little Jujitsu in there. We started working on ways of making Jujitsu look cool and flow, but with kicks and punches and that was our kind of our goal was to have that. Then we brought in Ryan and Casper and Jack Griffo and we started working with them. I think we got five or six days with each guy marking through their fights. It definitely has a great impact when we actually put it in front of the camera.

I thought Jack Griffo was great; did he have any training beforehand or was it just for the movie?

No, Jack’s not a fighter. He knew how to throw a punch and that kind of stuff, but he was super excited to do a fight scene. He is a young kid and up and coming actor who is great and I absolutely feel like he’s going somewhere. He came to us and was like, “guys, I want to fight!” and we were like, all right. Initially in the script he didn’t really fight and so we wrote in a couple of scenes for him and then one of the fights, the fight towards the end, where he fights the really big guy who is also my producing partner Josh. We’re standing there in the room and he was like “man, we gotta do one more fight right now”. I was like “Josh, get dressed”. Chris and I ran over to Jack and are like, “Dude, are you down for another fight?” He’s like, “absolutely”. So we choreographed that fight, which happens to be one of my favourites in the movie literally right there on the set. We then filmed it within 30 minutes of choreographing it with Jack and he just did great. And now he’s actually fight training and weight training so we really awakened the beast inside of him. So yeah, it was a lot of fun and I think it speaks well to my stunt team and to my coordinator on how well those fights came out.

I loved Casper as well as the (sort of) villain Driver. What do you think makes for a good antagonist?

Antagonists are a lot of fun, but it’s layers. For me, it’s always layers. Whenever I tell a story, my antagonist, I always want to know why. Sometimes the best thing is there isn’t a reason. I mean, that’s also a great antagonist. He just does it because he’s evil. I feel like with Casper’s character it’s more than that because for him it’s about not embarrassing the system. He’s a black ops guy, CIA. He’s the type of guy that when you see him it’s too late, you’re already dead. I gave him some more layers too and I started layering in things like does he necessarily agree with what he’s doing? No, he’s kind of doing it for the money. He cares for his team and then ultimately he has respect for Ryan’s character, Vic Davis where you go, wow, this guy is a deep villain. I hope by the end, a lot of people actually kind of cheer for him going “man that guy was bad ass”. That was kind of my intent and Casper portrayed it perfectly. I couldn’t be prouder of Casper’s performance.

I thought he was great. My main thought at the end was we definitely need a sequel. I mean, it’s open for a follow-up. I always love whenever you have the good guy and the bad guy having to team up and I would love to see Casper and Ryan have to face off against a bigger threat in a potential sequel. Do you have any possible ideas for stories for a follow up?

Yeah. We were definitely tossing it around and initially the script did not end open ended. I came in and added that because franchises are the way to go and, just like yourself, I think we’ve definitely heard from a lot of people as I’ve been talking and doing interviews over the last week that I know everybody wants to see more. And that’s a great feeling to have that the story was told well enough that people want to see these guys back in action. I think Casper and Ryan would be down for it. So hopefully we can put it together. 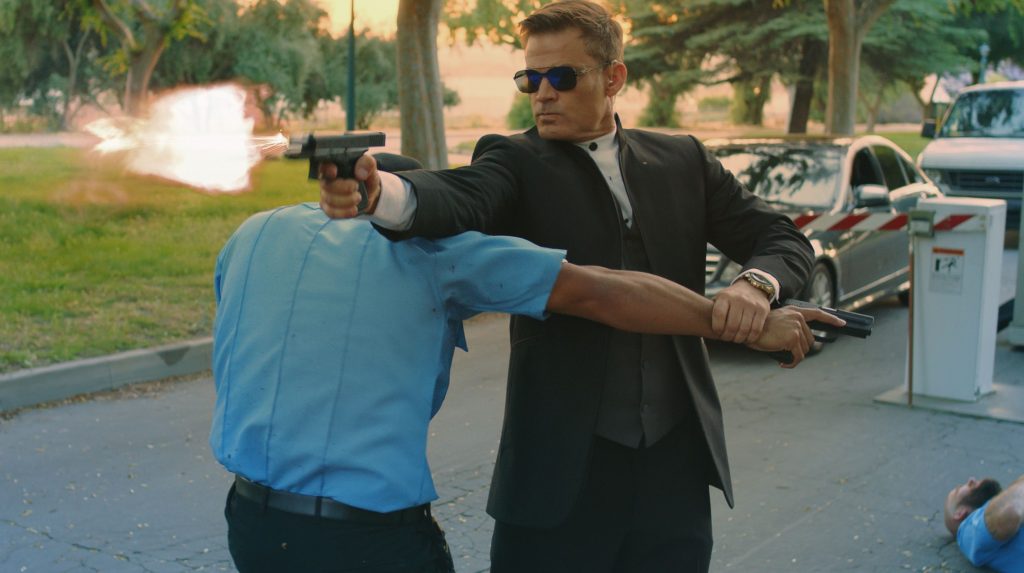 What do you generally look for whenever a script comes across your desk for you to be interested in the project?

It depends. I mean, because “my day job is TV”. So I get handed a lot of projects that are to pay the bills. TV is my day job. As far as indie projects go, that’s where I tend to be a lot more kind of selective as to what’s handed to me and for me a great indie project is all about the story. It’s all about the script and how well the story is told. I feel like a lot of people get lost in the sauce so to say where they have an idea, but it doesn’t come to fruition that they don’t follow any kind of format. Film has been around long enough that that if you do the research, then follow a proper format that was successful it’ll help your film be successful. I think that’s the key to telling a great story is we’re not inventing anything new. Stories have been around since mankind started. It’s more about telling your specific story, but using the same format that has been around forever. For me, I look for those things. I want to tell great stories. I want stories that make sense and characters that are layered. At the end of the day, I’d like people to walk away feeling like they want more and that’s something that’s important to me.

Do you have anything else coming up that you’re working on in terms of the action genre?

I’ve got a Randy Couture project that I’m packaging right now and we’re trying to get a few other actors on board but that one’s looking really good. I’ve got another film with Casper and Thomas Jane said yes as well. We haven’t locked that in yet, but it’s looking really good there, too. So yeah, I’ve definitely got some more action stuff in the pipeline.

Thanks so much for taking the time to chat and good luck with the movie.

Momentum Pictures will release the action/thriller, THE 2ND On Demand and Digital on September 1, 2020.