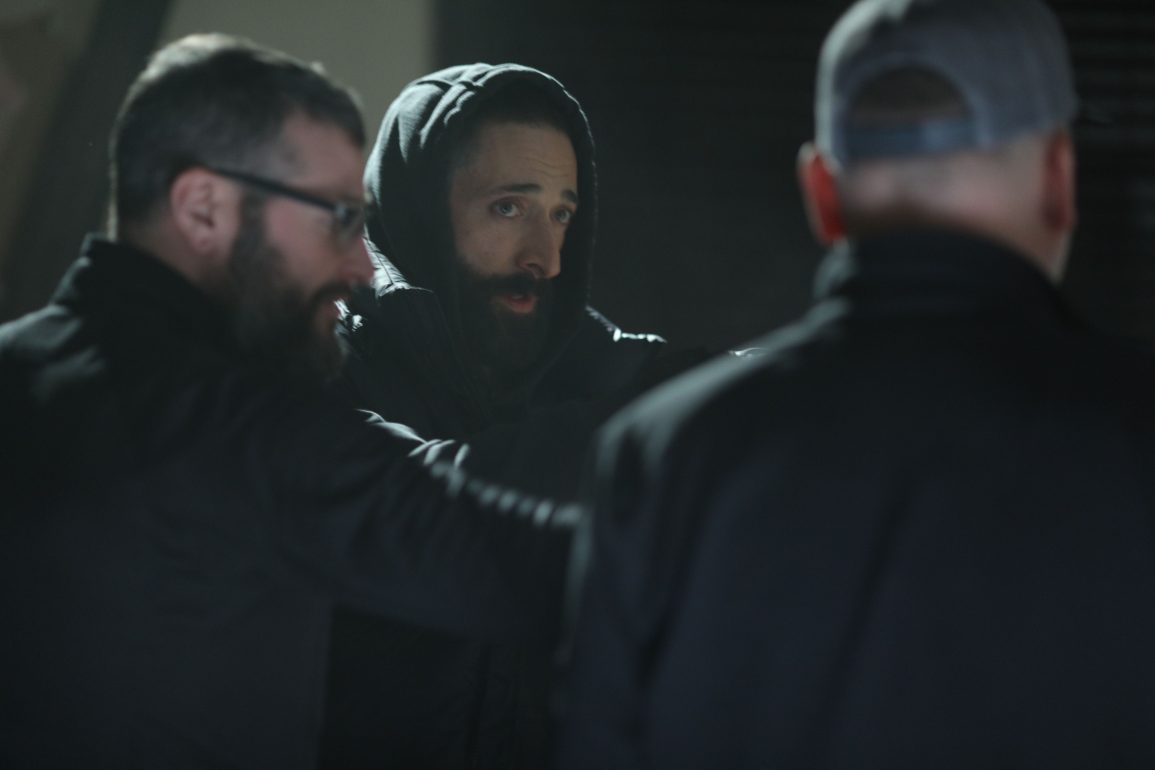 Paul Solet previously directed Adrien Brody in ‘Bullet Head’ and this month the director and star reunite for the action drama ‘Clean’.

Clean tells the story of “a tormented garbage man named Clean who tries to live a quiet life of redemption, but when his good intentions make him the target of a local crime boss, he must soon reconcile with the violence of his past”.

Director Paul Solet stopped by to chat about the film.

Today we’re going to be talking about your new film ‘Clean’, which you co-wrote with Adrien Brody. How did the initial idea come about?

We had done another movie called ‘Bullet Head’ together in 2016, and we just had a good time together. I think by the time we were finished with that; we really trusted each other. We were excited about finding something new and Adrien had sort of a clear emotional sense of a character that he wanted to bring out. He had a sense of an atmosphere and things in the world had been bothering him that he was interested in exploring and he was very passionate about it. The more we got to talking, the more we realised there was going to be a movie there and that was where ‘Clean’ came from.

What is the process like when you have two writers?

It’s different for every co-writing pair, and it’s even different from project to project for the same co-writing team. For Adrien and I by the time we were done with ‘Bullet Head’ we pretty quickly understood on that movie that we had very similar sensibilities and sensitivities so it really wasn’t a very difficult development process. We started spitballing together while he was doing Peaky Blinders and I went to visit him in Manchester. I just remember walking around this industrial city and dreaming together and thinking about what this thing could be. So we’d meet and we’d spitball. If he was in L.A., we would meet and talk and when I was in New York we would meet and we’d walk around the city and spitball. We go back to work; we compare what we came up with and we just sort of iterated until we found something that we felt like was honest and we kept on doing that throughout the whole process together. 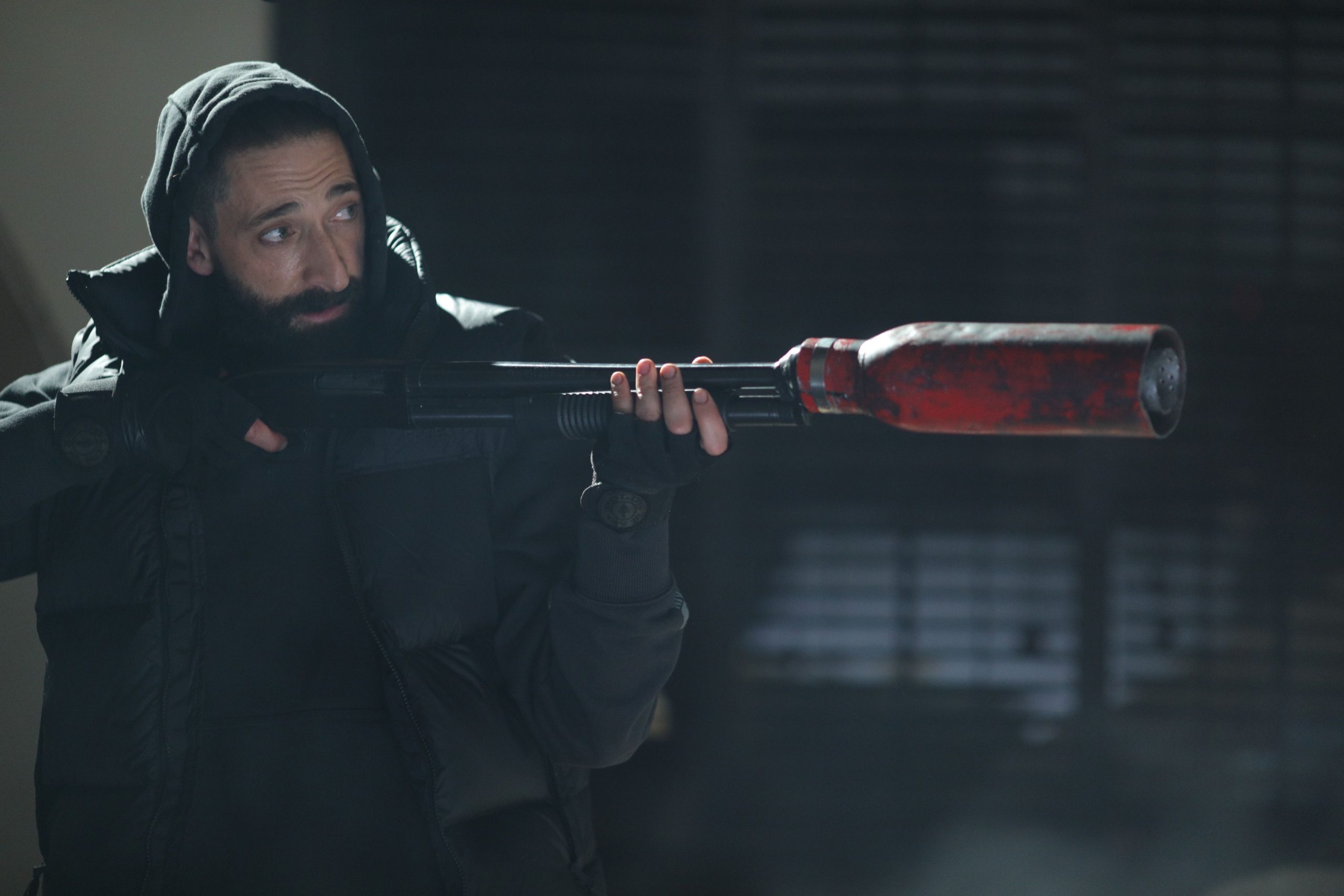 How long did it take from concept to screen?

This is a surprisingly fast process, which I think to the people who haven’t been through that process before, would still think it was a slow process; it was probably a couple of years since we initially started talking about it until to actually rolling cameras. That’s pretty fast to get from development to production. The writing process itself I think if you were to sort of distil it down, I think six months.

Had you finished filming before Covid?

We had actually, yeah. Now, I’ve been taking it pretty easy; I’m a new father. Spending time with my son and trying to just write as much as I can mostly, so minimal production during the pandemic for me.

Very wise and also that coincides with the next question about the film because both Clean and Michael are both failed fathers trying to find redemption. Michael just doesn’t really know how to be a nice guy. He goes to church but doesn’t really get why he’s going there. Could you talk a little bit about the various themes?

Fatherhood is definitely a core theme in this movie and failures are definitely part of fatherhood, I think. The character of Michael, played brilliantly by Glenn Fleshier, (who is a complete joy to work with) he just does a wonderful job of making him real because he is entirely villainous and monstrous in so many ways. Many of his values are deeply fucked-up and he’s a completely horrifying father. From his standpoint he’s trying to do something that I think is very familiar to many fathers. He wants his son to share the values that he holds dear it just so happens that his values are deeply fucked-up.

Yeah, I think that’s the thing. He doesn’t think he’s evil. He thinks what he’s doing is right, like most evil people. 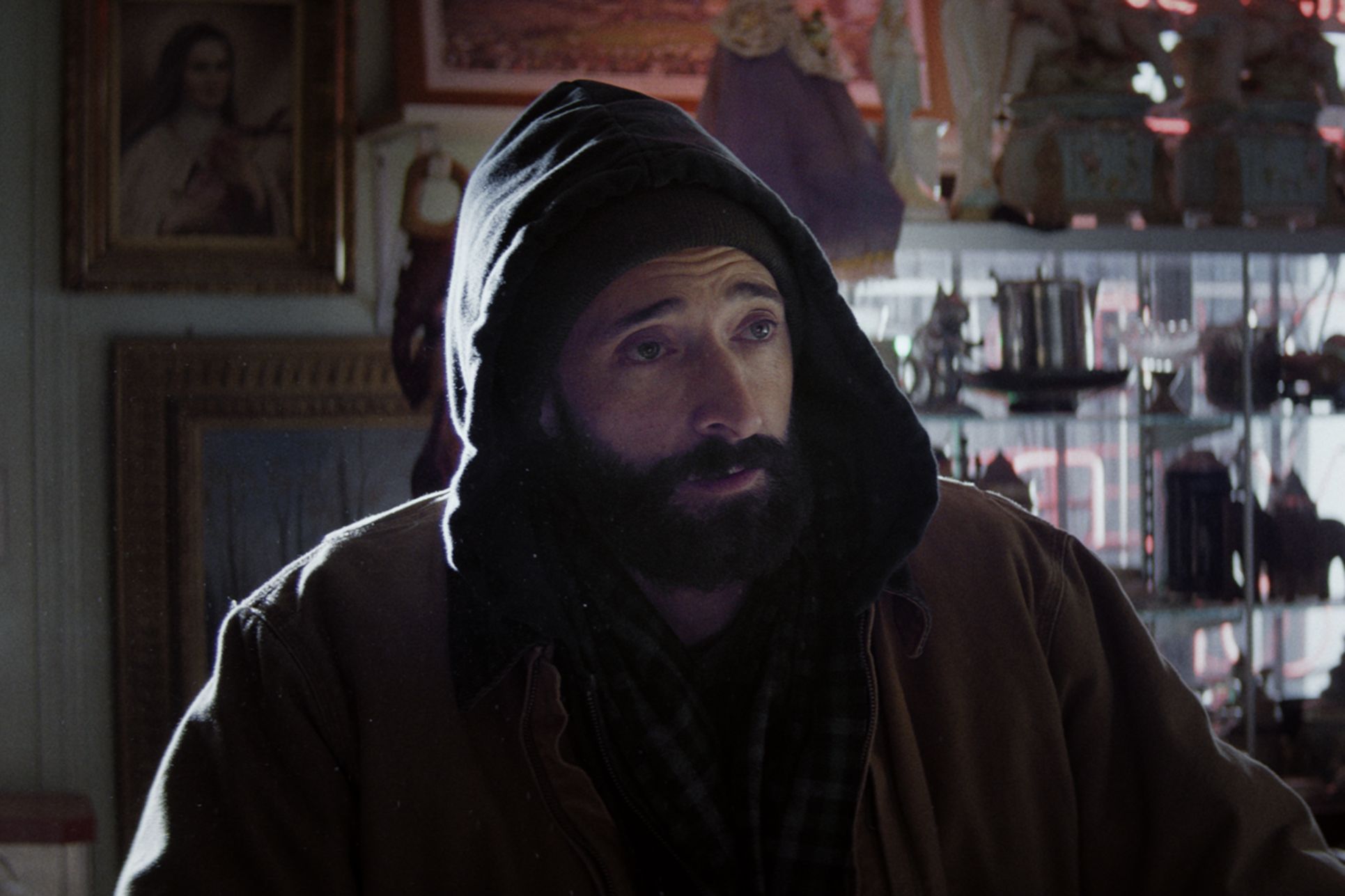 Adrien Brody provides the score to this movie as well. How did you work with him in creating the right sound for the movie?

People don’t know about Adrian; he’s very sort of modest about it, and he’s been making music since he was a kid, and he’s been making beats since he was in his teens. He’s collaborated and learned from a lot of really great people. Making film music is a much more complex thing. If you know anything about film music, you know there’s a lot of structure and technique and it’s a really nuanced craft. So that’s a really steep learning curve. For Adrian to take it on and succeed with it like this is really admirable. He did a really good job of curating and surrounding himself with the right technicians. That’s a big part of it. Adrian really looked at the score as an extension of his performance in a way that I think is really savvy. It’s something that actors don’t get to do and it is a really, really powerful tool. A score can make or break a performance, it can amplify a performance and detract from a performance tremendously and undercut a performance. Adrian understood exactly what he wanted to get from the performance and use the score to do that.

How would you describe your working relationship?

That’s funny, I think everyone needs something different and they need something different on different days. There’s no formula and in my experience as a director with every actor I’ve ever worked with, I really just do my job and try to create as safe a space as possible for them to do what they do and try to sort of help them navigate their way through an emotional map of the journey of that character to the movie, so that they can sort of just trust their instincts and be where their feet are instead of having to think about “where am I again?” and “what is the scene again?” and “what happened before?”

So, a lot of it is that. With an actor like Adrian, most of the time my job is really just to sort of clear the way for him and to protect him from as much of the noise as possible. To his great credit, on a movie like this where you’re really actively involved in physical production, he can’t be protected from a lot of that stuff. So, he had to shoulder that as well as all of the normal performance stuff and did such a terrific job that his performance is unaffected by all those other stresses.

Yeah, it looked like he was doing a lot of his own stunts as well.

One of my favourite scenes towards the end is when the truck crashes through the house. How did you put all that together?

Well, we had one shot at that and it worked. I mean, if it’s not technically a terrifically complex thing; you build the wall, you put it on a stage, you drive a truck into it and you hope the truck hits the right way and it did. That really was a real win for the art department. It was a tough thing to get right, and also for our stunt driver, he did a great job. You know, bang on.

Have we seen the last of the character of Clean? 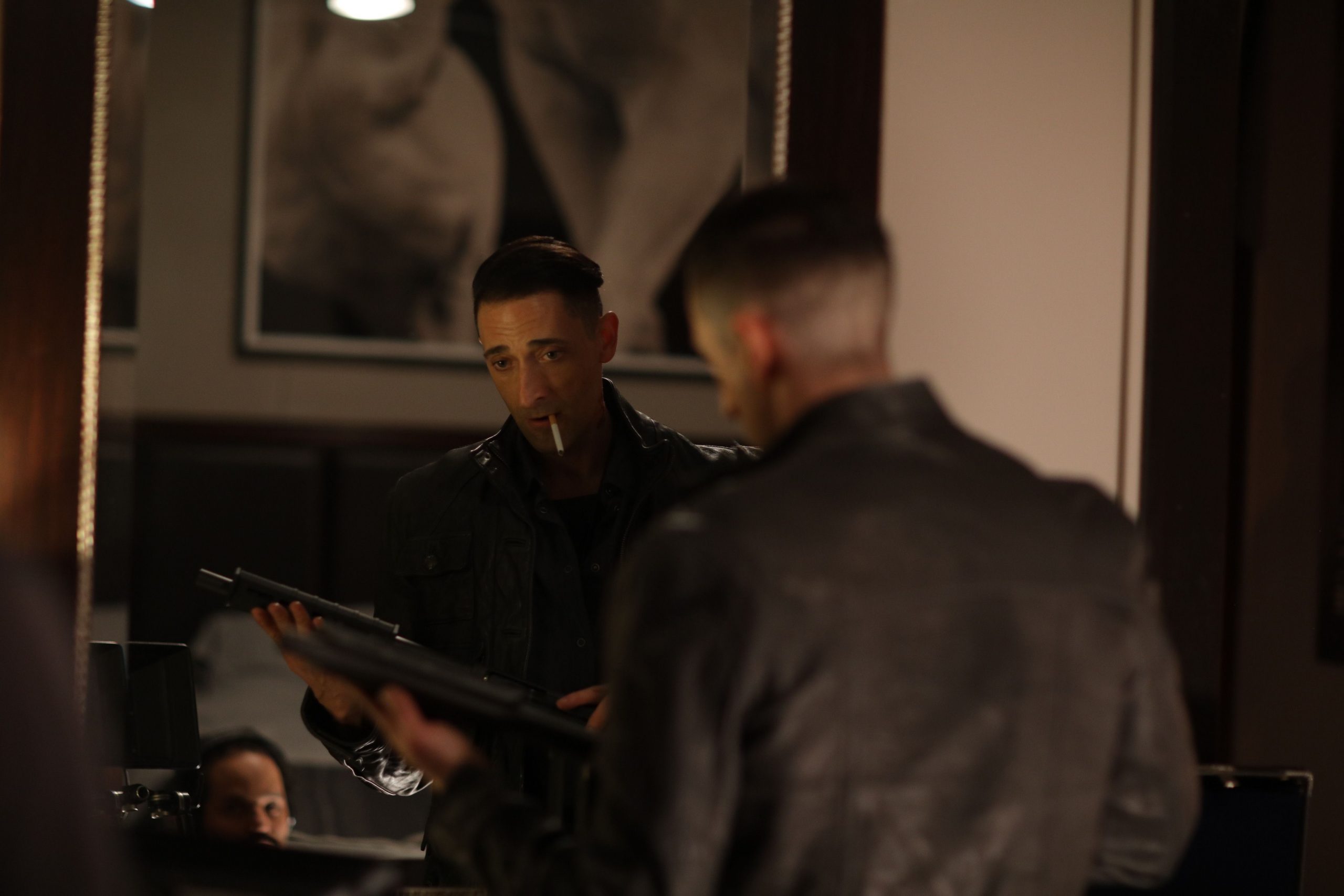 What would you like audiences to take from the film?

You’ve seen a lot from Adrien Brody, everybody understands that he’s one of the finest actors alive. You have not seen something like this from him. My hope is that your takeaway is you might leave this thing saying, “my God, Adrian, is the fucking force of nature in this thing”. This guy is a real deal action star.

I know you’re taking a break but do you have anything lined up that you’re working on?

I have a couple of things but I try not to talk about that stuff until they’re going but I have another documentary I’m doing with the team I did Tread with. I’m excited about that. There are a couple of scripted projects and some TV stuff, but you’ll hear about them in due time.

Thank you so much for taking the time to chat with me tonight. Good luck with the film.

It was my pleasure. Thanks. Nice to meet you.

CLEAN will be in theaters and everywhere you rent and buy movies on January 28, 2022.