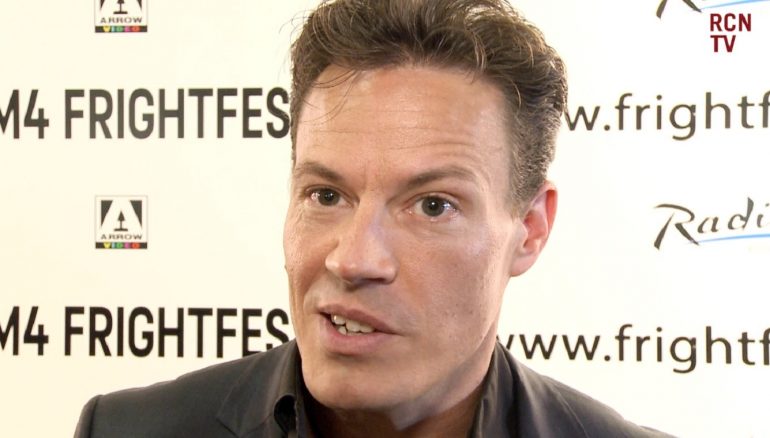 In the tradition of Taken comes the thrilling Never Let Go, on DVD and VOD this August from Sony Pictures Home Entertainment.

Award-winning actress Angela Dixon (Dead End) stars in a thrilling international action-thriller about a single mother desperately searching for her missing child in a beautiful, but unfamiliar land, following an apparent abduction. Trusting no one, she takes the law into her own hands, weaving her way through the murky backstreets and barren landscapes, now implicated in the murder of a seemingly innocent man, her connections back in the US begin to reveal that there is much more at stake than first meets the eye.

You’ve got to be an old school horror-thriller fan to want to even do this film, I imagine?. Tell me about some of your favorites?

A: As a teenager, my brother Jon and I would watched every kind of horror/thriller you can imagine. We were particularly impacted by George A Romero’s ‘Dawn of the Dead’ and Sam Raimi’s ‘The Evil Dead’. Eventually I met George, who was lovely but of course sadly died recently. We had the honour of being on a double disk with him with our African set film ‘The Dead’. But what caused me to want to make this was the horror I experienced personally when I thought my own son had been abducted whilst I was on vacation, but was actually drowning in the hotel pool. It was such a close call it got me thinking and I put everything else aside to make Never Let Go.

Is it true that ‘they’re not as good as they use to be’?

A: I sometimes wonder if it’s because we change as people as we go further in the world with all the personal stresses that the films that once wowed out innocent eyes and heart, just can’t impact us compared the knocks that we are getting on a daily basis!! But having said that, I have no interest in making a ‘Stab you in the tits part 5’ type movie, although I wonder if it would be a lot more fun if I did so!

How did you get Angela Dixon on board?

A: I met Angela on a boat in Cannes 5 or 6 years ago and we had a nice chat and connected instantly.  We both liked each other’s work. I felt she was a great actress and had a great look and physicality and I thought we should be seeing more of her on our screens. So, when this incident with my son happened, I wanted the resulting film to be about a woman and her motherly instincts so I wrote the part with Angela in mind. I actually called her to say I was doing so, but that probably she would not be able to play the part as she was not famous enough, but in the end I am so pleased I went with her in the lead. Her performance in Never Let Go has been called ‘Oscar Worthy’ and I am so pleased for all the accolades she is getting for it.

What kind of work did she have to do to get into the role?

A: I actually flew Angela out to Morocco on the first recce I went on and paid her for a couple of days to walk around Morocco pushing a buggy while I took test shots and we tried some panicked expressions and various moments of angst. It was probably a super weird thing to do but I think it helped us both a lot when we got back for the real shoot. It also helped me to know that I could work with her and that she wouldn’t be fazed by the location that was important to me. Some actors are great in audition, but fall apart on location. I needed to know that wasn’t going to happen!

Anything she struggled with?

A: Angela did a ton of preparation for her part as Lisa Brennan. She had to think about a particular family member to get to the level of emotion she needed. At first, the person she thought about wasn’t the right person. Then it clicked for her as to who she needed to think had been taken from her and she collapsed on the floor in floods of tears. That’s one of the things I loved about Angela, she takes risks and finds ways she can get to the levels of emotion that you need. Some actors dial it in, and that’s fine, you don’t need everyone in a heightened emotional state. That might be enough, but this part I wanted to take as far as I could, to represent the dread I felt about the possible loss of my own child, and Angela took it to the max and I’ll be forever grateful for that.

What kind of direction did you give her?

A: The shoot itself in Morocco was so hectic and troubled that whilst on location we were dealing with so many apparent disasters that I had a lot less time to direct her than I would have liked. Sometimes I just about had time to mumble or shout something at her across a crowded street, or mumble something to her as I passed by to set up another angle, but 9 times out of 10, she was on the same page. And talking of pages, Angela had made so many character notes on her script it was a bit like Nicholson’s character in the shining!

Any hiccups along the way?

A: The word hiccup’s just made me laugh outloud! I’d need a week or so to tell you how crazy things got. We had threats of arrest and even threats of death sometimes. Don’t get me wrong, most of the people we met in Morocco were absolutely lovely. Really kind hearted people, but every now and then, someone would approach us who didn’t understand that we were just trying to make a film and would think we were using our drones to spy on their women (Apparently someone the year before we were there had done this) and we had to get out before we were stoned. That particular hiccup was a frustrating one 🙂

What about physical injuries? Ever had anything go wrong on a set?

A: Angela is doing all this stuff for real – jumping across rooftops. Running bare foot across corrugated iron with broken glass all around. We did our best to clear a reasonable path for her but sometimes we had so little time she had to do it for real without a test run so as you can imagine a few of the cuts and bruises are for real. We also sometimes forgot we were filming extremely high up on rooftops in a hurry – I was running around following Angela with a fully loaded Steadicam and this film was very nearly in memory of me too!

What do you think of all these people that complain about movies being too violent these days?

A: If Harry Potter was around when the original BBFC banned list was around it would be on it! I think it’s true that there is a lot more violence, but now, the violence is so often touched or surrounded by CGI that the ‘tone’ of it is less dark or less realistic so perhaps less likely to be offensive. I still believe it can be more powerful if you show the reaction to a horrible event unfolding rather than a cheesy gore effect of the actual thing.

Have you ever had to dial back on action or sex in a film because a financier, distributor or investor has asked you to?

A: Yes, not on a sex one unfortunately but a few times on the violence front for particular territories. It’s really odd because you sometimes have to censor your film to sell in a particular territory where something like smoking is not allowed on screen. With Never Let Go, we had to remove one of the shots of Angela sewing herself up which was in the UK trailer. but has been removed from the US one. It’s in the film though!

What was your favorite moment in the film to shoot?

A: This is a tough question to answer. I just had to close my eyes and re live some of the shoot to answer it and I’m torn over it, but three things come to mind: The rooftop scene where Angela kicks the cops ass before she takes their gun and jumps off the roof – not because of the fun of the action, but we had shot this scene once already in Morocco, but had been kicked off the roof ourselves half way through the shoot. We then had to re-stage it in Palma, Mallorca and I just felt we were all more in-the-zone and the guys playing the cops were so sweet and happy to go with whatever we were shooting that one of them, even though he got kicked backwards and fell with his full body weight onto his head (This shot also remains in the film)  he was happy to get up and give it another go. I just felt this willingness to keep going meant I might actually be able to get the film in the can! The other is towards the end in a little cave like rural home (Shot in Morocco in the middle of nowhere) it was owned by this sweet family who were so nice and accommodating and we just calmly got on and filmed the dialogue between the local character played by the excellent Sanita Simms, who has actually been horrifically beaten by the kidnappers at this point and she talks calmly to Angela about her baby being like an Angel. It was magical – we all just did our thing in great synchronicity with only a few wild dogs outside to upset the sound recordist, but even this adds to the feel of it in the end! There was also a scene where a starving and dehydrated Angela sneaks into a family home and gobbles up a leftover meal for energy. It was not at all what I had in mind when I scripted it, but it’s such a lovely moment and I’ll let you into a little secret: There is a ghost in this sequence but only about 20% of people spot it on first viewing.

Do you feel you’re a better director when shooting dialogue scenes or moving sequences?

A: This is an easy question to answer. Moving sequences – sequences where I can guide the audiences eyes and tell a story without words. I’m comfortable with this as I’m in control of the flow and I feel I know what I need to do. Having said that. I love it when I’m looking through that lens onto my actors and that magic happens. That moment of truth that feels so real yet you know is completely made up. Or is it? It’s amazing to behold. I have a great respect for my actors and I have learnt something over the years: They are better than me at it – I used to direct actors from the moment they walked on set telling them how I saw it and how I wanted them to say it, but then I started to notice their heart broken expression, because they had prepared something, something I might now never get to see. Now I always let them do what comes out first and shape it from there. I hope you will see a lot of that in Never Let go and all my future films.

Many thanks for your time and thank you all for watching Never Let Go!