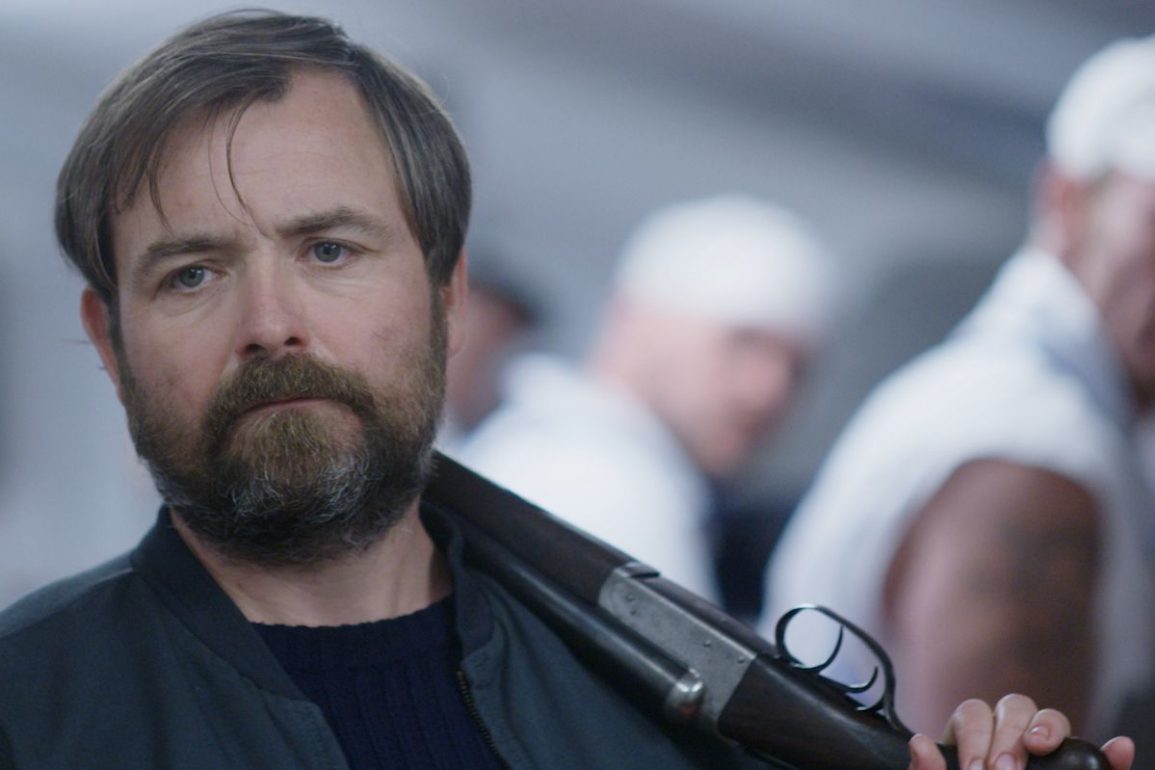 Interview with Neil Maskell on Bull

Neil Maskell stars in the latest revenge picture ‘Bull’ from BAFTA-winning writer/director Paul Andrew Williams. Maskell plays vicious mob enforcer Bull seeking revenge on the gang that double-crossed him. Ten years after he was last seen, Bull returns home to methodically track down those who betrayed him and find his beloved son. With the ominous warning: “I’m coming for all of them,” Bull stalks his former gang, leading up to a savage showdown between his wife and her mob boss father (David Hayman).

I spoke with Neil Maskell about the film as well as playing Winston Churchill on the hit TV show Peaky Blinders.

Today we’re going to be talking about your new film, Bull. What was it that appealed about the script?

Well, the first thing really was it came from Paul Andrew Williams, the director, and I’ve known Paul for a number of years. I went through another actor, Johnny Harris who was in his film ‘London to Brighton’, a film which I really liked. From there we stayed in contact; just chatted as mates, met socially every now and again, and he invited me to see these other films as they came up like ‘Song for Marion’ and ‘Cherry Tree Lane’, both of which I liked. He’s one of the most eclectic British filmmakers that we’ve got. These movies are all really, really different. Then we did a pop video together for James Lavelle from a few years ago. So, when he sent it over, it wasn’t like getting a script out of the blue. I knew his work and I knew it was hearkening back to ‘London to Brighton’, really in the sense that it was a genre film but rooted in a sort of almost social realist tone. I knew I wanted to work with him anyway and then when you get the chance to play the geezer on the trail of vengeance that’s what you always want to do isn’t it (laughs)?

Oh, absolutely. How would you describe Bull as a person?

I think Bull seems to be sort of a violent man who Is not afraid of confrontation with anyone or anything, but I think he’s actually a very damaged sort of individual and a product of his environment and the area and place where he’s been raised. Paul’s created like a lawless place at the edge of the tracks, we don’t really know where due to the accents on the film, which was a really good decision that kind of suggests all the points of the compass in England. Not even a working class but, like an underclass environment where the police are conspicuous by their absence mainly. He’s been a victim, quite possibly, of Norm the man he’s been in pursuit of since he was a young man. He’s been sort of coerced and controlled by this guy he ended up working for and being with the daughter of and having as the grandfather to his son; tied up in this horrible form of bond with this guy. He’s obviously very, very damaged by it, but that damage manifests itself as rage, I suppose he is a quiet force, but a force, all the same.

He’s a loving father at the same time, which is the thing that makes you still root for him a little despite the things he does…

Yeah, I’m glad you said that!, It seems to be a response to the film, and I’m really glad about that because I thought it was a bit beyond hope, really in my head. I think you do that as an actor in general. You try and make it come from a human place and feel relatable, but because of the brutality of the script and the behaviors and acts of violence that Bull commits. So, I didn’t necessarily think the audience would feel that way, and I’m really glad that they do.

Do you think the violence is the biggest challenge of playing a character like Bull in terms of trying to make him more sympathetic?

Yeah, I suppose so, and I didn’t let myself get too preoccupied in making him feel sympathetic, I felt sympathy for him. On a moment to moment, scene by scene basis I always felt it was coming from a human place but it was one of the challenges of it. Yeah, I think to be honest, the biggest challenge was having such little time to race through. We had three weeks to shoot the whole film. We were jumping around; it wasn’t shot chronologically and particularly by the time we got to the fairground. My biggest concern came to be like, will we get all the scenes that we want to get in the can? I hope this doesn’t get dropped and there was stuff that I felt was really important in establishing the character. It was almost like a race against time to get the film shot. It can become quite difficult when, as an actor, you’re aware of the limitations of time and stuff. But actually, it gave us like an energy and a drive and a shared endeavor. It was exciting and I think is sort of present in the film somehow.

Was there anything that ended up getting cut from the film that you regret or did the film came out the way you hoped?

Oh, the only thing was on the Waltzer thing we ended up shooting that. I don’t know why we ended up with a bit of time on the Waltzer however, we were waiting to get to another ride and so we had to shoot that, so we could get a few takes of it. It was getting wilder and wilder, and I had said to Paul, “I’m going to look at the lens. I’m going to break the fourth wall and look down the lens for this moment”. He was like “Yeah great, do it”. I think we were both absolutely barmy by that point (laughs) and they didn’t end up using it, but he’s a great filmmaker. Everything else seems to be in order but I would have quite liked to have seen that in the film.

What do you think the enduring appeal is of characters like Bull and the revenge genre with audiences?

I think catharsis, probably. We’ve all got a little bit of (well maybe not all of us) but I know I have got a kind of anger and sense of injustice. Whatever, if that’s societally or individually, we’ve all got grudges and resentments. In a very primal way, you’d often quite like to kick the front doors off and burn the house down. You know what I mean? When characters do it for you that can be quite thrilling without actually doing it in real life. But we’ve got these movies to live vicariously through and at least get a little bit of enjoyment from watching some other lunatic do it.

How did you feel when you read that ending for the first time?

Well, I’m one of the few people that knew it beforehand. I knew because Paul said to me, “this is High Plains Drifter”. I knew ‘High Plains Drifter’ and I know what the story was. So, it’s funny when people say, “Oh, I didn’t know what was coming”, I’m like, “Oh yeah, I never had that experience because before I read the script, he essentially told me the end, and it would be like someone sending you ‘The Sixth Sense’ and telling you “Bruce Willis plays a ghost”. You just kind of go “Oh right, okay”.  I knew that was coming. How it happened, I thought, was well done. I thought it could have been very difficult and even unintentionally funny if it had been done badly. But yeah, no, sadly, he ruined the ending for me. The fucking idiot (laughs).

Too bad. It was a great ending. I did not see it coming. Generally, what do you look for in a script and has it changed over the years with the kinds of characters you like to play?

Yeah, I suppose it has changed. I was very excited in general as a younger man, obviously whatever the part was about and basically it was like, “how many words do I get to say?” for the first 10 years of my career (laughs) when I played waiters and thug one and burglar four, Soldier Five and stuff. It’s just nice to have a part with a name for the first few years. Now I suppose I just look for detail and just something that I haven’t seen before; things that are unusual that subvert expectations. Just sort of more interesting, maybe than the cliches and stereotypes. I’ve been very lucky and I’ve got the wish fulfilment of playing the big baddie or the scary man and stuff in the past. So I haven’t got to many bucket list parts to tick off. I don’t hold out any great expectation of being the romantic lead in too many films looking like this (laughs). So, yeah, nowadays it’s just about how I’ll respond to it. Is the dialogue good? Is the character interesting and is it unusual?

Did you ever think you’d be playing Winston Churchill?

No, I really didn’t. I’m still not sure that was a good decision (laughs). Not by me, but by Anthony Byrne, who is the director of Peaky Blinders. I’ve worked with him a few times and he’s a mate; I’m absolutely so flattered that he had the faith in me to play that part, because it’s such a challenge. It doesn’t matter that I’m only in a couple of scenes in the last series and a couple of scenes this series; you have to research it and do it like you’re playing Churchill in a thing called Churchill. You don’t just turn up and not have your bag packed and your ducks in a row. So no I didn’t expect it and I’m fucking chuffed, man. It’s great and we have a lot of fun, I mean it’s Peakies. It’s quite a theatrical show anyway. It’s got its tongue firmly in its cheek by casting me as Churchill, I think. We run with that on the day, Cillian’s got a sense of humour, I like to think I have and Andy has too. I think of it as almost being quite an amorous relationship between him and Tommy Shelby. So we have a great deal of fun with that. Flirtatious really is the idea.

Finally, what would you like audiences to take from Bull?

I think it’s a great Friday/Saturday night, get a pizza, buckle up ride. Oh, it’s not for the faint hearted. We know that, but it’s a real foot to the floor, full throttle thriller that you won’t be bored. You’ll be glad you stuck it on; it’ll frighten the fucking life out of you. I hope people come away from it with their breath taken away and a sleepless night.

Well, thank you so much for taking the time out to chat and good luck with the film and your upcoming projects as well.

BULL will be in Theaters April 1th, and On Demand and Digital April 5th.