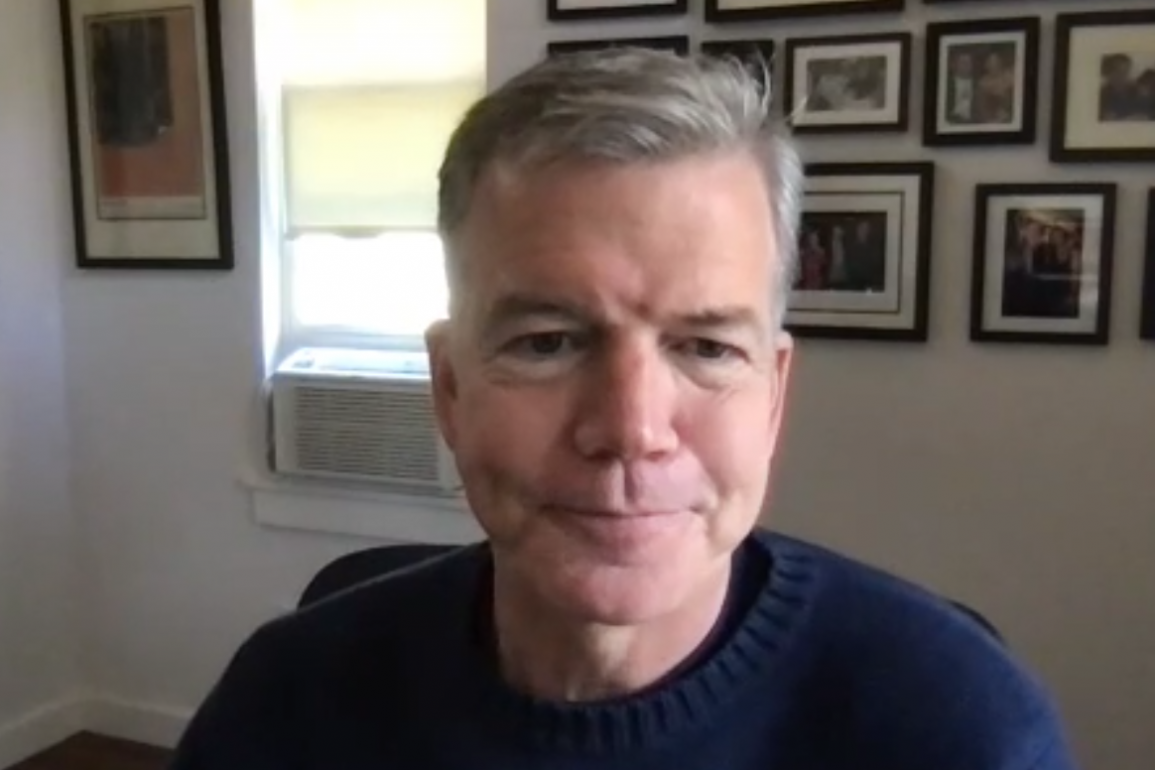 Robert Lorenz directorial debut was the 2012 drama Trouble with the Curve starring Clint Eastwood and Amy Adams; he has worked as Second Unit Director and Producer on various Eastwood movies like Gran Torino, Flags of Our Fathers, American Sniper and more. His latest project has him in the director’s seat once again this time with Liam Neeson as the star in the action thriller The Marksman. Robert stopped by to chat with us about the film.

Today we’re going to talk about your latest film, The Marksman; although it’s hard to picture anyone but Liam Neeson as Jim was he always who you pictured whenever you first got the script or was there anyone else in mind?

Well, to be honest, there were other people in mind, but I love the idea of Liam Neeson doing it because Liam you just buy him as a tough guy. His presence on screen is that he’s just formidable; he can be fearsome if he wants to be. But he’s also just so relatable and so likeable. This part called for both of those things; it’s really a character driven piece and I think that’s what drew Liam to it as well. So, I was thrilled to get him for it.

Yeah. He’s so perfectly cast in the everyman role where you totally believe him. He just is Jim. The Marksman is sort of a modern Western and road movie combined and almost felt like a Clint Eastwood film in style and tone. I feel like almost if it was made like years ago, he would have been in it. Is he your biggest influence as a director?

Well, I don’t know, I guess he’s a tremendous influence. I’ve worked with Clint for 20 years, so it’s hard to separate myself from all that. But I initially got into the business to direct, based on directors like Peter Yates, David Lean, Spielberg, Sam Peckinpah and all these guys. I loved action movies when I was growing up but and I think all of that sensibility was just something that made me a good fit for Clint for so many years, because we both like the same type of things and so that’s probably where it comes from. 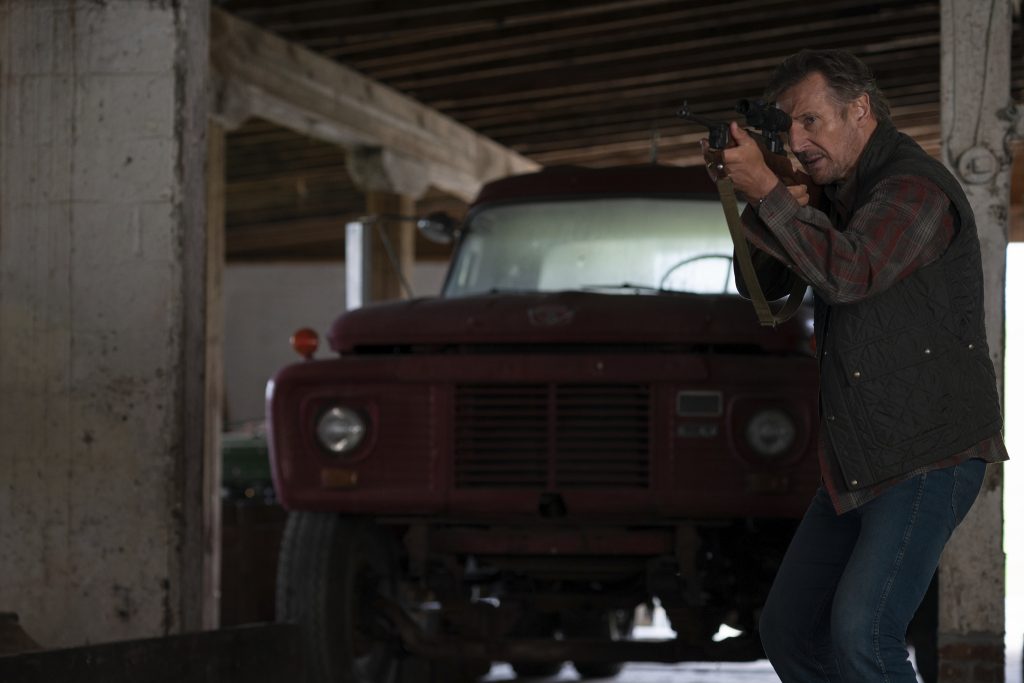 I particularly liked seeing the scene from Hang ‘Em High on the TV screen in the background. Was there any reason why you chose that scene?

It’s interesting. I did do it because it was Clint but the script called for a movie playing on the screen that would prompt a certain conversation between the characters and I was looking for a movie that I could get the rights to to put on there and sort of going through a lot of different Westerns and so forth. Then it finally dawned on me that I could get permission from Clint because he’s a friend of mine. So I immediately thought of playing Hang ‘Em High and that scene that’s in there. I called him up and said, “hey, would you mind if I put your movie in here?” So that was really the motivation behind that. Although Hang ‘Em High is one of my favourites, I really enjoy that movie.

Same here. Yeah, it’s a great movie. There’s a scene in The Marksman when Sarah tells Jim on the phone, “he will find you and he will kill you”, which is obviously a nice little nod to Liam’s Taken franchise. Did you add that or was that always part of the script?

That was part of the script when it came to me and in fact, I think there was a little more to it that I kind of took out because it was too on the nose. But I left that part in and I figured, well, since it’s not him saying it, it’s another character and hopefully people will let it slide and see it as a wink to the things he’s done.

Yes, I liked it. You’ve worked on your share of second unit directing and this is your first time directing a big action picture. How did you find directing the action scenes and how does it compare to directing dramatic scenes?

Yes, I directed another movie, but it didn’t have action in it. This one was the first time but this is really kind of more my taste, this movie. I like action movies and I like directing them as they are a lot of fun. I give credit to Mark Vanselow. He was our stunt coordinator on the movie. I like working with stunt people and camera people, figuring out angles and so forth and trying to sell the action and make it as believable as possible. But it’s fun stuff to do. It’s unfortunately time consuming; I wish I had more time to put into some of these scenes to make them last longer and be more fun. But because they’re time consuming, when you’re working with limited time and budget, you have to limit yourself. But I really enjoy making those kind of movies.

I loved the car flip towards the end; can you talk about putting that scene together?

Yeah, I was really intent on finding the right setting for that, and I wanted a road with a rise to it so that you could believe that they’d come over and reveal and then there would be enough room where he can flip the car. So, yeah, we did that just once, in fact we placed cameras around at safe distances and I put one that was a crash cam very close to where I thought it would flow. The stuntman asked me “where do you want to land?” I said, “if you can get it to land right here”. So we put the camera there and put a little tuft of grass there as a mark. And if you watch the movie, he flipped and landed right on that mark. I don’t know how he did it but he managed to flip it and land right in front of that camera.

It was great that so much of the action was done practically as well. There were no noticeable visual effects. Is that important to you to try and keep everything as grounded as possible?

Absolutely. It’s very popular these days and it’s appealing to do especially driving scenes. They have a lot of setups now where you can actually just walk into a stage and park your car there and put the actors in it and then they project the background on them. For me, those things are always missing an element of realism like the sound and the wind so in their performances they don’t feel like the people are actually in a car driving. So I really wanted to do all of that driving stuff practically, which was a challenge to me to rig those things and then get out on to a highway. It’s fast moving traffic and you’ve got to coordinate with the police. It’s a challenge but I think it makes it feel more real, makes it feel like you’re really out on the highway. So we did all of this, practically none of it was on stage. There is some visual effects work in there, but hopefully it’s done well enough that you don’t spot it.

I’m a huge fan of music scores and I particularly enjoyed Sean Callery’s score for The Marksman. How did you work with him in creating the right tone for the movie?

Sean, he’s terrific. He’s been at it for a while and he has a very varied resume, so I was excited about that. I just sat with him, showed him the movie and just referenced to different other films and things. I had some temp score that I had plugged in there so it kind of gave him a sense of what I was going for. Then I just let them run with it and just asked him to respond to the emotion of what was going on on the screen and just try and enhance that or wherever possible. I was thrilled with the score he came up with that was really unique and added a whole other dimension to the movie.

I thought Jacob Perez was fantastic as Miguel; why was he the perfect choice?

He just came in and he just had this sort of swagger and this kind of believability that is this little toughness edge to him that I thought this is a kid, even though he’s so young and innocent, I could believe that he could endure what happens in this movie and come out the other end okay. When he came in and read, our casting folks found him. He hadn’t ever acted in a film or TV show before, as far as I know. There was a lot of concern from the rest of the producers and so forth that he could pull this off. I just felt like he had something there that made sense, so I showed his audition tape to Liam and Liam loved him and he said to me, “I’ll help you do whatever it takes to get the performance out of this kid” because he really wanted him to be in the movie as well. So we worked together but not to take anything away from Jacob. Jacob is a really talented young actor and he did a great job.

I also thought Juan Pablo Raba was well cast as Mauricio because he’s not quite a one-dimensional villain. He sees himself as a soldier with a code. What were you looking for in the character?

Yeah, there wasn’t a lot there on the page and I told Juan Pablo and I met with him that I wanted to try and give him an identity and give him something so that nobody in the movie were easy heroes or easy villains. Everybody’s got more to them and I think that really appealed to Juan. He came in and when I first met him his hair was great like a movie star and then he came in to read I asked him to read so that I could show the other producers what I was thinking. He had shaved his head and he had this leather jacket on and just looked mean as hell. I thought, “oh, great, this is this is what I want (laughs)”. I wanted the character to be ruthless and threatening because a lot of the time he’s not on screen or with Liam and Jacob. You have to believe that there’s this danger that’s lurking out there, even though it’s not on screen. So when we do see him, he had to be tough and mean. I thought he brought a lot to it.

So just one quick final question. What would you like audiences to take from The Marksman?

It’s a character piece; it’s got some bursts of action here and there, but it’s a character drama and a thriller. It’s about a guy who is sort of consumed by his own problems like his finances and his job and so forth. Over the course of the film, he comes to realize that his life has real meaning and purpose but that’s when he helps someone else and that’s that’s the theme of it.

Thanks very much for taking the time to chat.

Thanks Eoin, it was a pleasure meeting you. 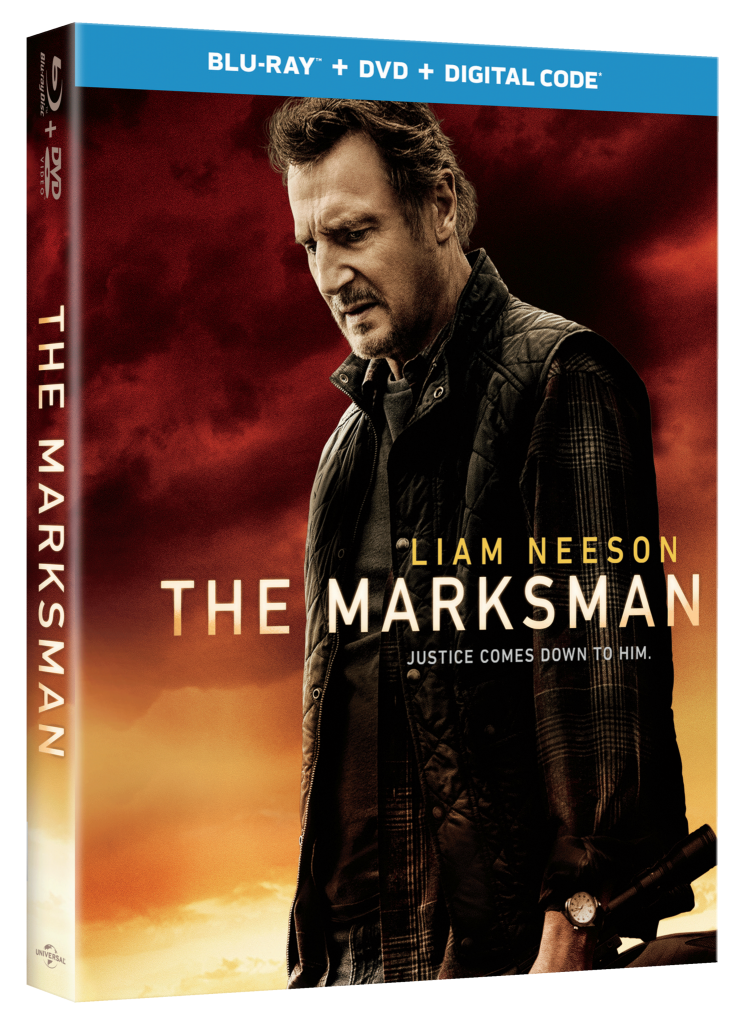 The Marksman will be available on Digital April 27th, and Blu-ray & DVD May 11th.