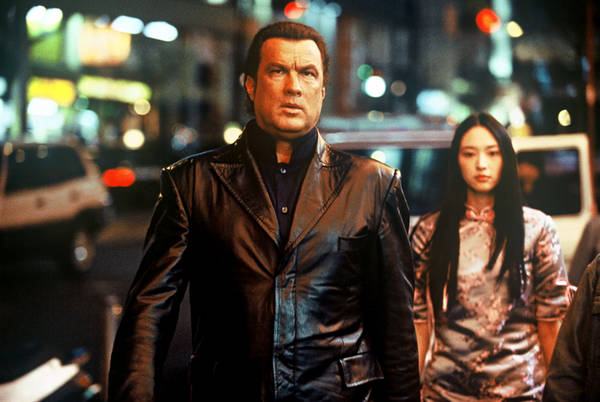 Into the Sun has a satisfying sword fight finale and the odd interesting scene but it’s slow pacing really lets it down.

Plot: When a government official is killed, an American operative with experience in the Yakuza culture is brought into investigate.

Review: Oh look! It’s ANOTHER Steven Seagal movie! Well, at least I had a few days off. Into the Sun is actually one of his more boring movies as not all that much happens until the last 15 minutes. Actually that almost makes up for the rest of the movie as it has some pretty cracking sword action.

The movie could almost be considered foreign considering the majority of it is in Japanese with subtitles. I have to say that Seagal is pretty fluent in the language too, giving it a different feel from his usual fare.

He is as always dressed in black and I think if he was in the desert in the baking sun, he’d still be wearing his black trench coat.

The movie has plenty of blood spattering violence and a satisfyingly psychotic bad guy in Komura who just seems to enjoy hurting and killing people. His rise and fall is nicely done and when he’s on-screen you’re just waiting to see what awful thing he’ll do next.

Seagal loses his partner and potential wife in this movie and even then displays zero emotion and not even a hair out-of-place. Come on, Stevo, a BIT of effort would be nice. Still, at least there is no dubbing this time… that I noticed.

Nice to see William Atherton in a movie again; haven’t seen much of him since Die Hard and Ghostbusters. He’s always such a great smarmy prick but in this movie he’s actually a good guy.

There are a few decent fight scenes but the dull pacing fails to engage and I had to force myself to stick with it.

Some of the music was cool, which is stereo-typically Asian sounding, but it had some good action cues too.

Overall, Into the Sun has a satisfying sword fight finale and the odd interesting scene but it’s slow pacing really lets it down and I wouldn’t want to watch it again.