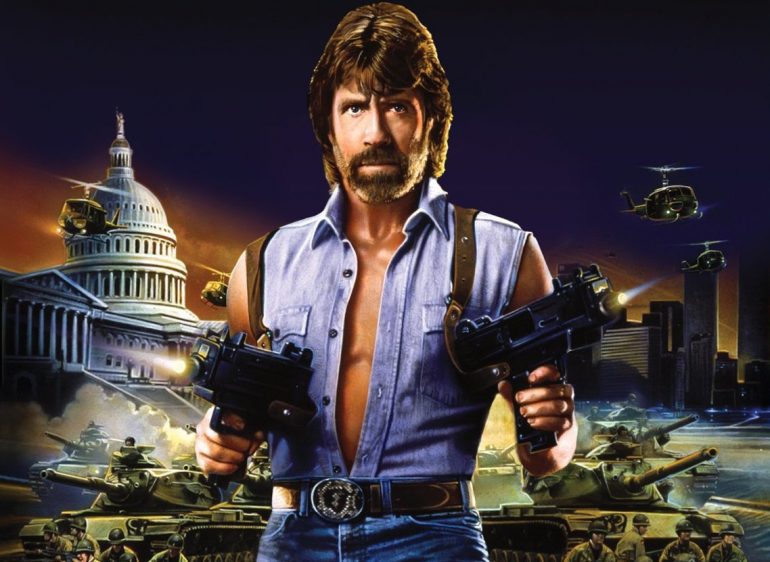 It’s hard to believe that this Chuck Norris classic and my personal favourite film of his is 30 years old. Technically the film’s birthday is September 1st this year but frankly I’m too excited, so I’m writing this now.

The story of the movie was pretty absurd but that’s really what made it awesome: Retired CIA agent Matt Hunter (Chuck Norris) is forced back into the business when a villain from his past re-emerges. Soviet Mikhail Rostov (Richard Lynch), a terrorist whom Matt once caught, wants to exact revenge. After failing to find Matt at his Everglades home, Rostov and his army of Communist guerrillas begin carrying out terrorist acts all over southern Florida. Millions of innocent lives are at risk, and it’s up to Matt, the National Guard and the FBI to save them.

Watching the movie now, sure it’s cheesy but the action remains first rate with punch ups, shoot-outs and explosions galore. I sometimes forget just how violent it is as well; the late Richard Lynch is pretty creepy as the villain Rostov who is quite terrified of Matt Hunter.

He pretty much knows that Hunter will be the man that kills him and it’s only a matter of time before they meet face-to-face once again.

A particularly brutal scene involved Rostov shooting a guy multiple times in the balls which just isn’t cricket. He’s utterly psychotic and you know the final showdown will be legendary.

Only a Chuck Norris film would have him firing a rocket launcher in an office building, where he kills Rostov in spectacular fashion.

The climactic action scene involved real tanks and was one of the best action sequences of the 80’s. There was a real sense of scale to it which you wouldn’t see today unless it was all CG.

Initially, bad guy for hire Steven Berkoff was wanted to play Rostov but he allegedly turned it down due to the violence. This didn’t stop him from starring in Rambo :First Blood Part II or We Still Kill the Old Way, so I’m pretty sure there were other reasons.

The movie was also novelized in 1985 and according to Fast-Rewind it added a lot more character development for both Hunter and Rostov (for example, Matt Hunter is not Hunter’s real name, it was a name issued to him when he retired) as well as some subplots, like a romantic relationship between reporter McGuire and Hunter (which is only barely hinted at in the film).

As we previously mentioned on the site, Chuck was meant to sign on for a sequel called Avenging Force but couldn’t do it due to scheduling conflicts so they cast Michael Dudikoff instead.

There are so many awesome moments in the movie with Matt Hunter eliminating bad guys in imaginative ways.

It’s just such a great action hero moment but it also has some rather impressive stunt work too.

So after 30 years Invasion USA is still one of my top movies with Chuck Norris on top form, a classic movie villain in Rostov and explosive action which stands up well, despite being a tad cheesy.